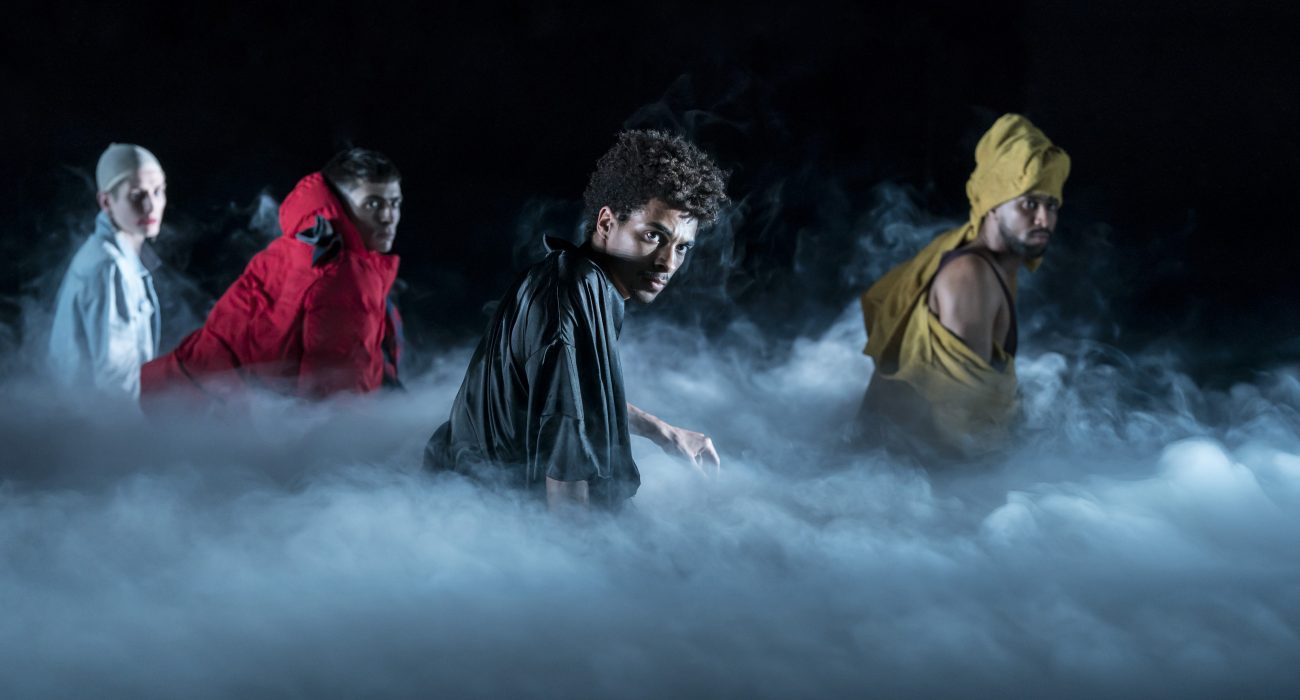 Presentient is the first act by Wayne McGregor, who is from the UK. It epitomises the contemporary dance style and is all about physical expression. The company are dressed in blue costumes that drapes gracefully on their bodies. The blue fabric and the dancers’ fluid movements make them resemble a lake. Movements are not always coordinated; often multiple dancers do the same movement at different times with their own spin to it, making the performance appear natural and not rigid.

There are almost always a group of dancers on stage. The multitude of bodies sometimes moves fluidly together as a unified being, sometimes scattering into smaller groups on different parts of the stage. Even though there are so many dancers onstage at the same time, the performance does not appear chaotic because it is so well-rehearsed. Simple, extended white lines are projected on to the background, reflecting the dancers’ body lines and sharp angles that are McGregor’s trademark.

The next act, Rouge, is choreographed by Marion Motin from France. She specialises in Hip Hop, and this is her first time working with a contemporary company. She took the essence of the contemporary genre and modernised it for the 21st Century. The movements are quick and coordinated; the company works together like a well-oiled machine.

The floor of the stage is covered in smoke from dry ice; poles emitting fluorescent light are placed on the floor before the dancers are hanged behind them. The fantastical setting, the bright lights and the quick movements give the stage a surreal vibe.

The focus of the performance is the striking neon lights that flash brightly, both simulating a hectic city life and making everything else feel irrelevant because of their sharpness. The rods of light change colour frequently during the performance, from a dark red, to a blueish white, to an industrial white colour that almost hurt my cornea.

In Your Rooms is the third and final act of Triple Bill. It is the longest dance performance out of the three, but it does not feel like it, because of how riveting and dramatic it is. Hofesh Schechter is an Israeli folk dancer and musician and his choreography has a clear political message.

The dancers’ movements are easily recognisable; one moment they are standing together with hands in the air as if they are protesting, and later they are on the ground with their arms before their face as if they are struck down. One performer holds a sign that says: “Don’t follow leaders” on one side, and “Follow me” on the other.

This is the only act where the light is cast briefly on the audience, as if to include us in the performance. This choreography has a strong sense of storyline and is paired with an ominous background narrator who is constantly being cut off. His voice becomes twisted, and then multiple overlapping voices are introduced, creating a spine-chilling atmosphere.

In between the chaos, we hear random sentences that do not make sense on their own but have a political message when you combine them: “Words replacing feelings”, “We have to communicate”, “Make the right choice”.

Rambert – Triple Bill is a radical form of theatre that combines storytelling with contemporary dance. It is an intense performance and will stay with you long after you leave the theatre. You can buy tickets for their shows, taking place all around the world, on their website: Rambert.org.uk.