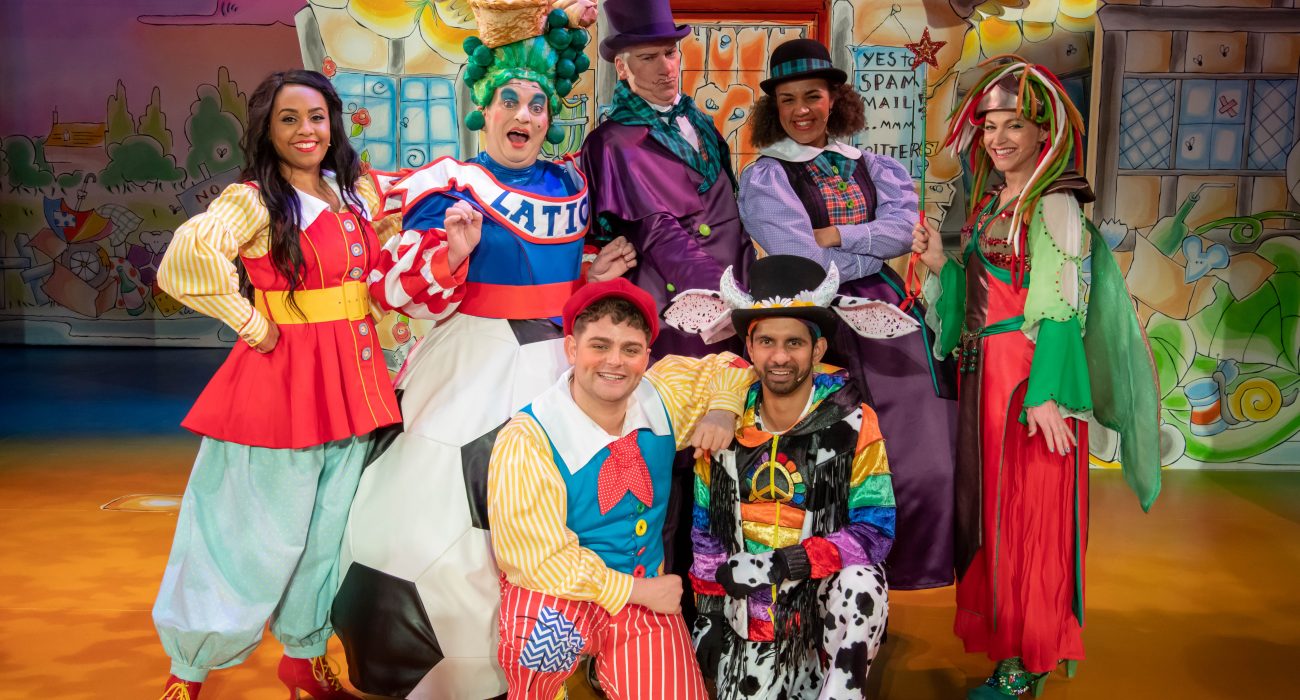 Review: Jack and the Beanstalk

Oldham Coliseum’s Jack and the Beanstalk is a traditional panto with a modern twist, created by Fine Time Fontayne and Chris Lawson.

It is loosely based on the traditional fairy tale of the same name. The evil witch, Mavis, and her husband Malcolm, who pretends to be a giant inside a large mechanical robotic suit, terrorises the village by stealing people’s electronic devices. It is up to the heroes, Jack Trott, Jill Grabbmuch and their eccentric family members, to stop them.

This light-hearted pantomime is distinctly simple, with a binary distinction of good and evil, a quick resolution of threats, and on the nose moral lessons. Jack and the Beanstalk is effective in its simplicity. It has all the traditional ingredients of pantomime: distinctly British humour, wordplay, slapstick comedy, adult jokes, and rhyming dialogue. It stays true to its genre and is focused on having a lot of fun.

The dialogue has a distinctively modern vocabulary and briefly refers to many political topics. Witch Mavis criticises “extinction rebellion”, while Jack and Jill have this brilliant interaction:
“I could kiss you!”
“No.”
“I respect that.”

My biggest praise goes to the cast, all of whom executed their roles brilliantly. The actors’ amazing acting immersed the audience in the insane, silly plot. In traditional pantomime manner, the fourth wall does not need to be broken as it does not exist. The performers actively engaged and addressed the audience, inviting them to clap along to the songs, or to shout the traditional phrases such as “he’s behind you!”. The audience played an active role and contributed to the plot.

The cast had believable chemistry with each other, and their interplay was very interesting to watch. Even though they all wore extravagant, panto-worthy costumes, and they had exaggerated body language and gestures, they managed to play their characters as relatable. Each actor managed to catch and hold the attention of the audience while they were on stage, and they all brought something extra to the stock characters they play.

Some actors played multiple roles that were completely different from each other. Jenny Platt played both the good and evil fairy, and the two characters appeared in scenes immediately after each other. It was amazing how quickly she shifted between two distinctly different personalities and two equally complicated costumes. Another such actor was Mitesh Soni, who played the two unique characters: ‘Hazy the hippy vegan cow’ and ‘Malcom the cowardly giant’.

The theatre went all out for the set and the props. Everything on stage was exquisitely designed and looked like they had come right out of a fairytale book. The theatre was medium-sized and was divided into many detailed scenes by artistically painted curtains. There were so many different three dimensional elements on stage and many new additions during the performance. The props were painted in brilliant colours and established a mood of fun and enjoyment.

The only complaint I had about the performance was the minor awkwardness of sound. The musical arrangements were cheerful and suited the theme of the performance. The performers sang many songs from diverse genres, and a team of sound technicians sat before the stage, one of whom played a beautiful live accompaniment from an electric keyboard. However, the background music was often louder than the actors’ voice, and I was not able to hear their dialogue or live singing. Sometimes, the actors’ articulation suggested that they were aware of this defect because they sounded like they were shouting rather than talking. Other than the sound element, the show was near faultless.

Jack and the Beanstalk runs until 11 January 2020 at Oldham Coliseum Theatre.