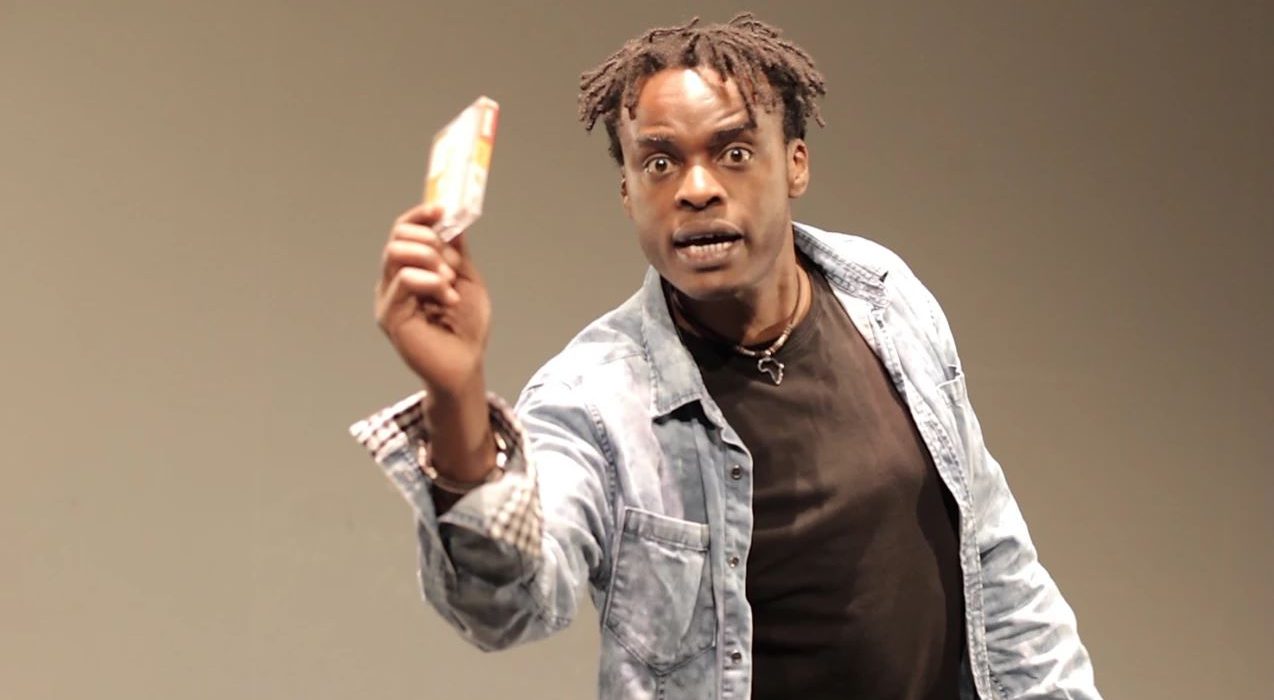 Split/Mixed is a deeply moving production written and performed by Ery Nzaramba in lyrical language; full of honesty, humour and humanity.

It all began with a question: “Where are you from?”

This common question is not always easy to answer because it forces the recipient to think about their complex lives and condense it into a simple answer, or else risk follow-up questions such as: “Where are you really from?“/“Where are you from originally?”/“Where are your parents from?”

The protagonist Eddy explores different answers to this question as he reflects upon his own life journey. He has lived in Belgium, Rwanda and the UK, and survived nightmarish traumas, such as the horrifying Rwandan genocide and the tragic death of his friends and family.

The one-man-narrative is framed by a discussion between his two internal voices named “conscience” and “vanity”. The former blames him for surviving, attributing his current wellbeing to sheer luck and accuses him of being a “genocide benefactor”, while the latter defends Eddy and acknowledges the pain and guilt that comes with the title of “survivor”. Nzaramba’s beautifully crafted narrative displays the resiliency of human beings and how people can overcome unthinkable traumas and still be whole.

Nzaramba’s natural and believable performance drew the audience into his story, inviting them to be emotionally invested. From the very beginning, he established a sense of closeness with the audience. When he first entered the stage, he nervously waved and said “hi” and received some nervous “hi”s from the theatregoers. He told the story in a realistic, fragmented manner, as if he was following a stream of consciousness and adding things randomly when he remembered them.

His acting was believable and natural, he played multiple roles with suitable volume, articulation and body movements. His tone of voice was calm when he playing Eddy and exaggerated when playing the two dramatic sides of his psyche. Nzaramba was constantly engaging and interesting to watch as he rapidly switched between different roles with different ways of speaking as he skilfully showcased the protagonists’ overwhelming internal battle that is omnipresent throughout the play.

The set design was very minimalistic, a rough stone block and set of stairs in the same material make up Split/Mixed’s stage. Nzaramba was casually dressed in simple costumes that suited the honest and down-to-earth atmosphere of his narration. He utilised his clothes during his performance, for example, lowering and raising the waist of his jeans to signify his own mental and physical maturity.

The play only had a few props, which were used very effectively. Nzaramba brought a vintage boom box on stage and carried many cassette tapes in his pockets, which he proceeded to insert and extract from the cassette player during his performance. The prop was not functional, but he had previously recorded voice-overs to aid him in his storytelling, which began playing in the background speakers whenever he inserted a tape into the cassette player. These props had powerful significance for the play because they signified his own control over his story, or multiple stories, about his life.

Nzaramba not only delivered a great performance but he also collaborated wonderfully with his sound and lighting team. Background music was not used much for this production, but sound effects fitted perfectly with his acting to add a layer of realism to his storytelling.

The protagonist followed his train of consciousness and repeatedly switched between contrasting scenes swiftly, from a British nightclub, to a hospital in Belgium, to a Rwandan churchyard littered with bodies. This was achieved by the powerful sound effects and lighting change. The brightness of the stage changed naturally to suit the theme of the story and the progression of the plot. In addition, spotlights were used to highlight the storyteller. He left many things unsaid, and used sound and light effectively to fill in the gaps in his story.

Split/Mixed told an acutely moving and brutally honest story about the privilege of being alive and ran at the Royal Exchange Theatre Studio from the 9th to the 11th of December.