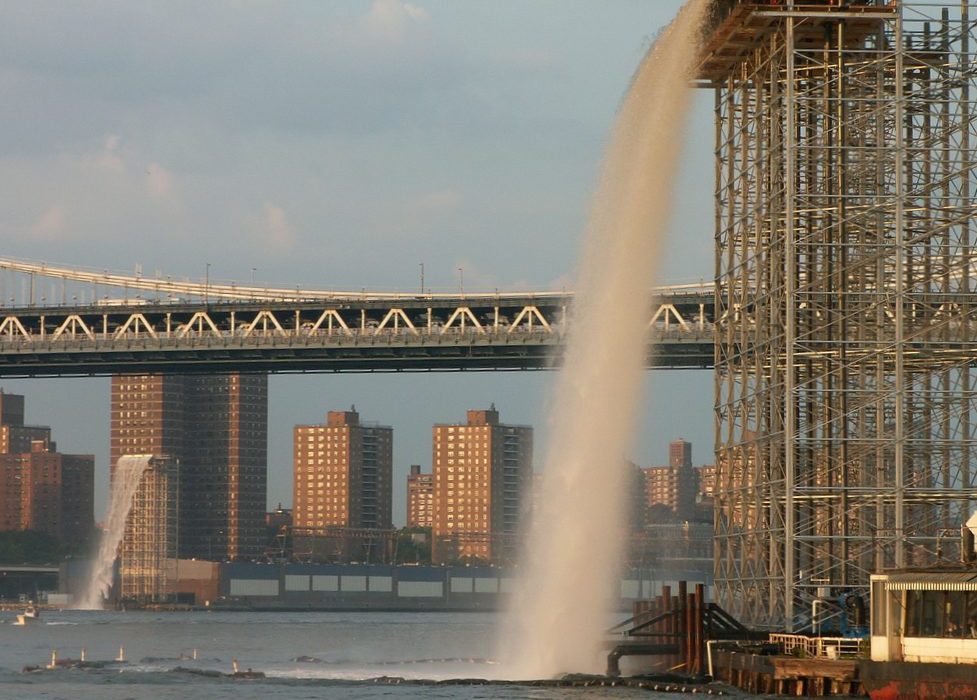 Water cascaded from a precipice above, exploding upon impact with the pool below. What loomed in front of me was Olafur Eliasson’s sculpture, Waterfall, a tall mechanism from which water fell ceaselessly. Full of texture and movement, it filled the empty sky, refracting light and magnifying the forms around it. In the city, it’s easy to subconsciously blur and homogenise your surroundings, but the sensual response which Waterfall elicits roots you in the present. You see and hear the passing of time.

But from behind, the sculpture was distinctly different. The falling water had masked a hollow scaffolded frame. Where the frame was visible, the sculpture looked thin and fake. This discord between the harsh yet familiar lines of scaffolding and the otherworldly falling water was uncanny and vaguely unsettling. A deconstruction of the mechanics of the natural phenomenon, Waterfall demonstrated the very human desire to dissect and destroy the natural world around us, in a relationship which is characterised by blatant abuse of power. The piece grated with its surroundings, a mockery and appropriation of the beauty and mystery of nature. 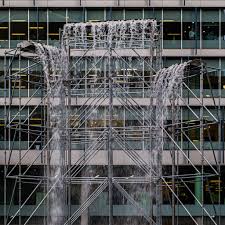 On seeing the sculpture, I was faced with two irreconcilable experiences. When looked at from behind, Waterfall evoked the fragmented, dystopian world in which we currently live, and which will become more visible as the climate crisis worsens; a world of intense water irrigation and filtration. This idea was haunting, especially in London, where ‘nature’ is constructed by city planners and isolated within designated spaces.

Like Eliasson, Romantic poet and author Percy Shelley questioned our perceptions of nature. In Frankenstein, this is primarily through the figure of the grotesque creature. A reanimated construction of rotting flesh, created by a human, the un-dead creature threatens our notions of Naturalness. This is because the creature transgresses the boundaries which humans create to differentiate the Natural from the Unnatural.

The threatening question of our monstrous power has haunted the popular imagination for decades since the novel’s publication, with the mythologisation of both Frankenstein and his creature. Shelley’s novel forced the reader to evaluate discourse around Nature, to notice how they interact with it.

Similarly, Eliasson’s art is about eliciting reflection through a viewer’s interaction with a piece of art. In an interview for, It’s Nice That, Eliasson describes how his art is focused on the viewer’s subjective experience with the sculpture. He expressed his fear of the gradual dehumanisation of spaces which is occurring within urban places:

“The world we live in today is very much driven by an experience economy, one which focuses on commodifying our feelings and perceptions.”

Eliasson aims to reappropriate such urban spaces through art, making people aware of their surroundings so that they can connect with it and with each other.

“It is more important than ever to work with the self-evaluative quality of experience that art offers … self-evaluation allows us to reflect on the relativity of the world in which we live, to reimagine it, and to reposition ourselves in society.”

Both art pieces make the reader or viewer aware of the world around them. Through both pieces, Nature is constructed and refigured by humans. In both, I was disturbed to witness the destructive power of humans. In the age of the Anthropocene, as the natural world is becoming more endangered, we need to pay fresh attention to the question of our destructive tendencies, our desire to appropriate. We need to re-evaluate how we perceive the world around us. Resolving the climate crisis is a collective act of becoming aware of our position within the world, our relationship with nature, and the spaces which surround us, and acting upon such reflection.