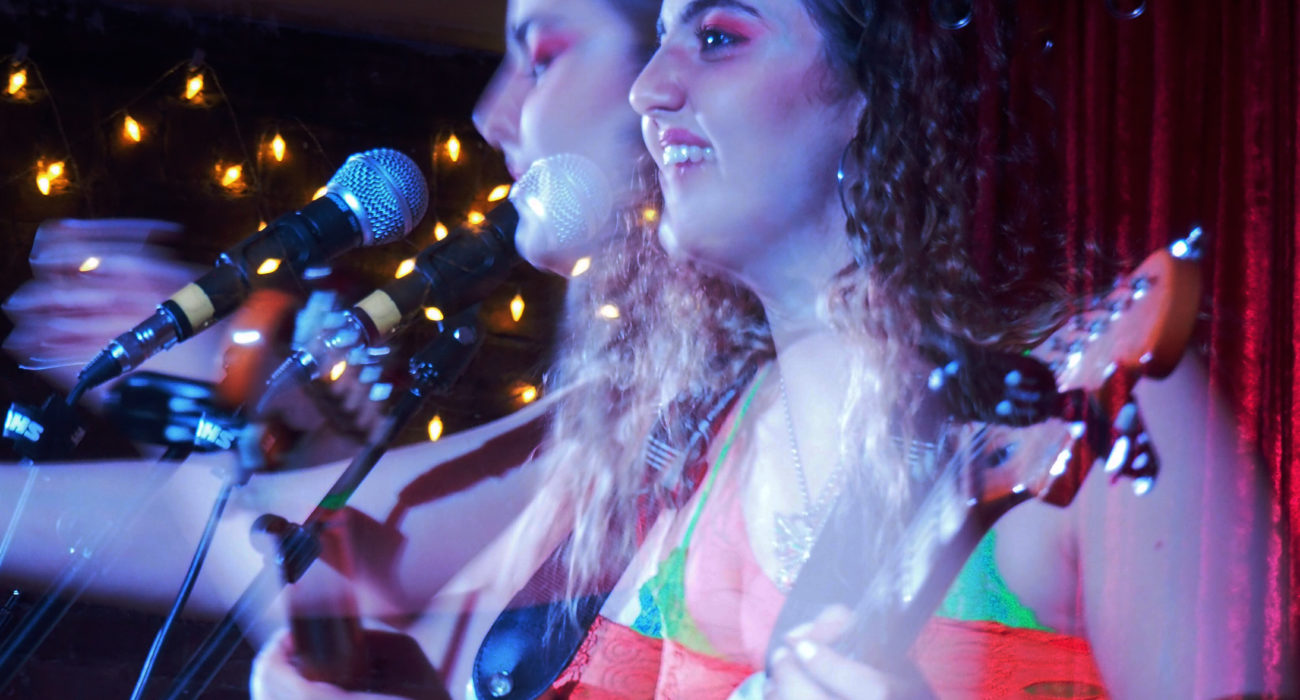 Once A Month is a student-led charity project that strives to relieve period poverty in Manchester. On Wednesday 25th November, FuseFM in partnership with Gigs and Bands Society organised a charity gig at Fuel in Withington, raising money and collecting sanitary and hygiene products. Entry was a donation at the door. You can find out more about Once A Month and what they do at their website here.

I get upstairs at Fuel by one of the most inconvenient staircases in the world. God forbid I try and carry more than three pints up there at a time, but it’s small and cosy and the house lager is not bad for £3. The stage is about a foot off the floor, the window onto the street behind it covered by long red curtains. There are guitars and amps and keyboards littered around. I arrive during soundchecks so I pass the time as most cool, sexy, mysterious music contributors do, which is by playing sudoku on my phone until something happens.

Something is Isa, an acoustic solo act from Bristol. Her songs are emotional and heartfelt, carried through by the uncomplicated strength and softness of her voice. She plays ‘Rosanna’, a song about watching a friend struggle through a disastrous relationship, beginning the introduction as an ambulance siren hauntingly whines past. I think I’m getting the impression of the evening: relaxed vocals and guitars tinged with sadness but not too much sadness. A bit like Phoebe Bridgers on a half dose of antidepressants.

After Isa is Evie, who’s onstage with a guitar and two friends who play keys and violin. My Phoebe Bridgers analogy holds true. Evie plays her own songs, notably ‘Faking It.’ She leads the way through her set, playing primarily by herself. But the best moments are when there’s synthesis onstage, the three of them crashing together at the song’s greatest point, creating something sad yet uplifting.

By the time Evie’s set is over, the room is very busy and as much as I’d like a break, I can’t ditch my spot because there are not many good photos of the backs of people’s heads to be taken. It gets cramped to the point where I’m sitting on the edge of the stage for the third act.

Aisha is from London and it’s one of her first gigs. The nervousness shows on her. She’s a bit uncertain and giggly, looking anxiously to her friend on bass from time to time, but I think that the crowd is supporting her more because of it. In stark contrast to these nerves is her voice, rich and convincing, barely wavering off delightful. She plays covers that get people singing (‘Put Your Records On’) and her own songs (‘London to Manchester’). Ultimately, she’s charming, sweet, and the room seemed to really like her. Not bad going for a first show.

There’s a break that’s a bit too long, the kind that makes you realise how warm you are and how much your feet are starting to hurt, and then Rosie Charles is on with an electric guitar. She starts off with a cover of ‘Isn’t She Lovely’, which- as I’d argue Stevie Wonder always will- wins people over immediately. Another great singer, she does enough with her voice to keep the solo-act situation from getting too samey. Her own songs concern relatable things like a “peng guy at a bus stop” that you’re “too pussy to talk to”, and whilst there’s nothing wrong with the originals, her covers are the most fun—and all commendable choices. Her rapport with the crowd was unlike any of the other acts of the evening. After ‘Valerie’, there’s booing when she announces the approaching end of her set, which she rounds off in a duet with the final act of the night and close friend Mei Mei, introducing some lovely harmonies with the combination of their vocal skills.

My Phoebe Bridgers analogy is completely shattered by catbandcat. But not in a bad way. They missed the bill by so far that it reminds me of one of my mates thinking Wigan was near Birmingham—meaning they were instantly my favourite act of the evening. What they brought onstage alone was enough to get your attention: a drum machine, a single cymbal, two trumpets, two melodicas, a keyboard and a synth, a violin, a bass, a cool-looking guitar, a train whistle, a recorder, a laptop, and a bunch of miscellaneous gear sitting on top of an ironing board. Each member of the six-piece band is studying music at the University of Manchester (slightly unsurprisingly). Three of them were stood around the ironing board, rotating almost frantically between instruments. Their genre is difficult to pin down. Elements of electronic, jazz, pop, I think a Jason Derulo lyric (“Been around the world, don’t speak the language / But your booty don’t need explaining”), and some moments that lean towards orchestral. After their set, I ask Mhairi, who’d been playing the trumpet, train whistle, and melodica, what genre the band subscribed themselves to. “I don’t know” is her first answer, her second is: “electro-pop.” Mikey, who’d been singing, amongst other things, said “you choose”, though adding after some hesitation, “just not indie.”

Last on is Mei Mei. Accompanied by an acoustic guitar, she impresses the waning crowd with the top-end power of her vocals. After a few songs though, it feels a bit like you’ve heard it once and heard it all, especially as she covered ‘Put Your Records On’ (a repeat from Aisha), and the room doesn’t like her quite as much as they’d liked Rosie. I’m getting the impression that the crowd is getting a little bit tired (it is a Wednesday) and her stalling between songs is only working to drag things out a little longer. That said, I enjoy her cover of Katie Tunstall’s ‘Suddenly I See’. This was a relief considering the initial guitar intro made me think it was going to be ‘Sweet Home Alabama’, something that filled me with an indescribable sense of dread.

Following Mei Mei’s set there was a final call for any donations from Char Hughes, co-station manager of FuseFM who has worked with Once A Month many times before. She told the audience if they were on their way to buy some cigs they should also pick up a pack of tampons! There was a final cheer for all the bands and a thanks to Gigs and Bands Society for working alongside FuseFM to organise such a successful event. For most of the night Fuel had been too packed to move very much, and even then people were mostly downstairs having another drink or a cigarette out on the pavement. As I wait for my bus, I watch a girl carefully peel one of the posters for the evening off the bus shelter to keep for later. All indicators of another good night after the success of GABS’ Bread Shed takeover earlier this month and the recent FuseTV Live Lounge event which took place at HAUS. Manchester Media Group and GABS have proven they’ve definitely got more fuel in the tank, and I can’t wait to see what they get up to together in the new year.