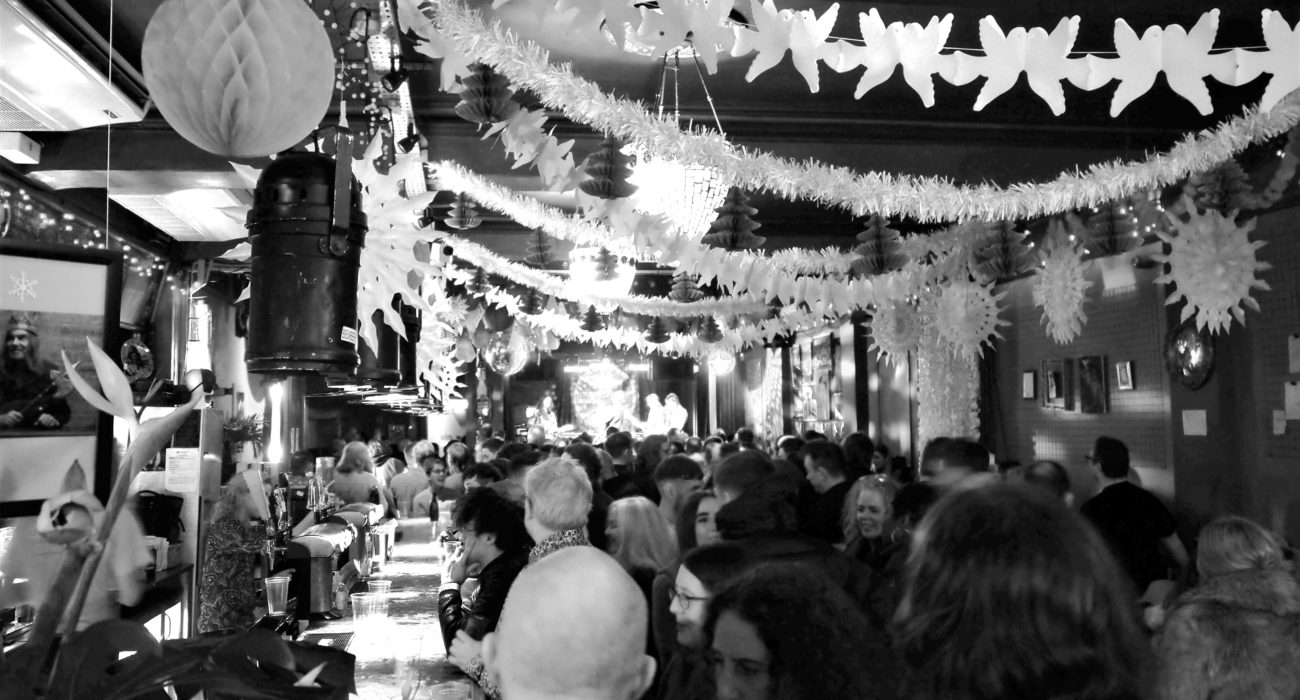 It’s a cold December night and I’ve walked all the way up the Friday night wasteland of Portland Street to reach Night and Day Café. Why suffer this experience? For nothing else but to see long-time Manchester post-punks Blue Orchids play promoter Deco Records’ last gig of the year.

The first of the two openers, DEAFDEAFDEAF, blow me away. The rhythm section is nothing short of thunderous and the two guitars are clawing tooth-and-nail over each other to be heard. Meanwhile, their lead singer leaps around and spills beer on his shirt and, for the cascade of noise that is their last song, ventures out onto the floor clutching the microphone before returning to sing whilst back-to-back with their lead guitarist.

It’s an epic act for an opening band. They walk off the stage with their instruments screaming on the floor, howling like the wind after a storm. The howling continues once they’ve left the stage for a minute until someone thinks to pull the plug. They end up being my favourite band of the night, as well as the one with the most mullets (3). There’s a possibility for correlation.

YUKA TREE have to try and put the scraps together after DEAFDEAFDEAF’s devastatingly short set. They begin with an instrumental, which, whilst not bad, maybe wasn’t what they needed as a first impression. Their frontman admits it’s a difficult act to follow and he’s right. The pace of their set is easy going, there’s a lot less movement onstage, except for when the frontman stands on the speakers in front of the stage and it wobbles so much underneath him I’m almost witness to a terrible accident. My favourite song of the set is ‘Preacher’, though I wish it were a little bit longer. Mullet count for YUKA TREE comes in at a measly 1 (the bassist, so it bassically doesn’t count).

Night and Day has pretty much filled up for the main act of the night. Blue Orchids, formed in Manchester in 1979, attract the kind of crowd that might be expected of a band that’s been around so long. I feel a bit out of place—it’s not uncommon that I’m in the running for the youngest person at a gig, but it’s usually not by this much. But then the band starts, and it’s the kind of thing you forget about.

Martin Bramah fronts the band with a blue Gretsch and an almost unsettling ease. The stage consists of him, an electric ukulele, a keyboard, a bass, and the drums. The electric ukulele looks a bit ridiculous onstage, like someone’s accidentally shrunk a Fender Jazzmaster, but I’m pleasantly surprised by the solidity of the solos it manages to produce.

Amongst their set, ‘Lucky Speaks’ and ‘The Flood’ stand out to me. I’m struck by the sense sprawling wastelands spun by Bramah’s lyrics. The combination of guitar and keyboard brings colour and interest, but the words crooned over them take shape around a cynical heart. Bramah has a sort of weird drama about his performance, reminding me faintly of Talking Head’s David Byrne. Every now and then his eyes roll back to behold the ceiling as if in prayer, and the keyboardist is often down on his knees in a similar style.

They close with a cover of Chicago’s ‘25 or 6 to 42’, then leave the stage without much hanging around. No mullets for Blue Orchids, which makes it difficult to draw conclusions from the experimental data provided. I will have to continue this study of hard-hitting music journalism into the new year, it seems.

Night and Day Café recently celebrated its 30th birthday. That same week they received a noise complaint from a neighbour. Manchester City Council is now threatening to close them down as a noise nuisance. If you care about your local music venues, local bands, and the scenes they produce around them, sign the change.org petition to get the noise complaint removed here.