The sale of a Lowry painting has sparked controversy over fears of it being removed from the public eye
News
‘Going to the Match’ by L.S. Lowry, due to be sold in October. Credit: The Lowry @ Flickr.

The L.S Lowry painting, ‘Going to the Match’, is due to be auctioned this October, with the possibility of it no longer being accessible to the public.

Paul Dennett, the Mayor of Salford, has called on the football community to fund the purchase of the painting so it will remain in the public domain. Dennett fears that if the painting were to be bought by a private collector it could risk being taken out of the public eye.

Taking to Twitter to voice his dismay at the news of the sale, Dennett said it would be “truly tragic” if ‘Going to the Match’ “was sold to a private collector & ceased to be free to access by people here in the City of Salford”.

Wouldn’t it be truly tragic if this iconic L.S Lowry painting “Going to the Match” was sold to a private collector & ceased to be free to access by people here in the City of Salford as it has been for the past 22 years on the walls of @The_Lowry? https://t.co/EYUc8m0jFS

In a letter to “[people] of means”, Dennett argued that “this piece should be touring the country – not occupying the hallway of a private residence”. Reductions in national funding and the extra pressure being placed upon local councils means the City of Salford cannot buy the painting themselves. 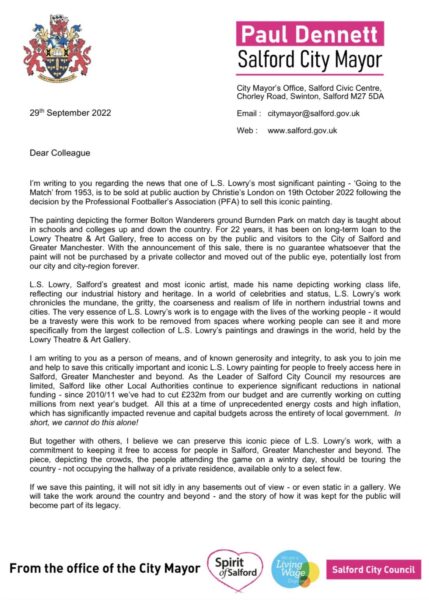 The piece is currently owned by the Professional Footballers Association (PFA), who bought the painting in 1999 for £2m. The PFA “is the union for all current and former footballers and scholars in the Premier League, the FA Women’s Super League and the English Football Leagues”.

Some experts have estimated that ‘Going to the Match’ could sell for around £8m. The PFA have said that the money raised from the auction of this piece will go towards supporting charitable organisations who help promote “the unifying power of football in society”.

Lowry is known for his depictions of everyday life in North West England. ‘Going to the Match’ is one of his most renowned pieces, portraying crowds flocking to Burnden Park stadium, home of the Bolton Wanderers.

Due to the painting’s national significance, Julia Fawcett, chief executive of The Lowry museum and gallery, has said that there will need to be a discussion with the buyer over how the painting should be used.

New Dean of the Faculty of Humanities

Professor of Sociology, then Head of the Alliance Manchester Business School. Now Professor Devine will take on Dean of the Faculty of Humanities