Only fools argue that Rishi Sunak does not exude a certain degree of competence.

You only have to watch his campaign interview with Andrew Neil – an opportunity Liz Truss cowardly declined – to see his clear political skill on display. Extremely knowledgeable, slick communicator, and evidently passionate about his vision for the future. What’s not to like?

Well, if you’re a Conservative backbencher, not much. Yet, whatever you think about Rishi Sunak’s credentials, the challenges that await him in the coming months essentially stack up to mission impossible.

Following astronomical levels of borrowing during the Covid-19 pandemic, inflated energy prices due to Russia’s invasion of Ukraine, and Truss’s disastrous free-market experiment, the new Prime Minister inherits an economic outlook that would make any self-proclaimed Thatcherite shudder. Bloomberg estimates that Sunak must plug a £35 billion shortfall to balance the books, which The Telegraph reports could entail 15% spending reductions for all government departments.

Normally, a Conservative PM in this scenario would not have to think twice about getting spending cuts approved, given the Tory majority in parliament. Normally – but these are not ‘normal’ times and this is not a conventional majority.

The 2019 election mandate, secured by Boris Johnson, promised significant investment across the board. Promises were made regarding the construction of HS2 across England, billions were pledged to communities left behind by regional inequality, and significant improvements for public services were offered up. This puts new Conservative MPs in an extremely difficult position.

Will they vote for Sunak’s huge spending cuts to plug a fiscal hole? Or will they be unable to, in good conscience, tell their constituents the mandate they secured just three years ago is not only dead, but they must also accept unprecedented cuts to public services? I don’t envy that choice.

Add this to the fact that Labour is seeking to force a parliamentary vote on every individual spending reduction and you have a winter of opportunity for Tory MPs to revolt at any given moment. Does Sunak have the political skill to manage this unstable situation? So far, his touch has not been faultless.

But let’s suppose, just for a moment, that the new PM handles this with remarkable skill and gets huge spending cuts past a party that promised huge investment. What next, then? Just the small task of repairing the Conservative Party’s image.

Following the rolling scandal machine that was Johnson – take your pick from Partygate, Wallpapergate, Owen Pattersongate, or whichever other “gate” takes your fancy – Liz Truss was bequeathed a government associated with sleaze, corruption, and deception. We all remember Labour Leader Sir Keir Starmer’s often repeated line “it’s one rule for them and another rule…”.

It’s beggars belief that Liz Truss thought there was only one way to fix this image issue, only one way to show the government was focused on people’s priorities – to give huge tax breaks to the top 1% by borrowing tens of billions. Genius.

As a result, the Tories trail the Labour Party, a Party still recovering from its worst election loss since the 1930s, by between 25 and 30 points. Betting experts put the probability of a Conservative majority at the next election at around 5-10%.

Now I’m sure Sunak will go some way to remedy this image crisis for the Conservative Party. He’s undoubtedly a serious guy. But his first big mistake – on this front – came only one day into the job: the reappointment of Suella Braverman as Home Secretary. Just six days after being forced to resign for mishandling extremely sensitive national security information, with several breaches of the ministerial code reported, the woman with a dream to see refugees on a flight to Rwanda is back with only the most ritualistic ration of contrition.

Sunak may feel that Braverman offers a necessary branch to the right of his party, but there is surely no way he thinks she is the best MP for the job. A character who took only three weeks to show Liz Truss her true colours will show them again quite soon, to Sunak’s detriment. She will go to war with Jeremy Hunt over the issue of immigration numbers. She will continue to treat her great office with the disrespect she showed last time, and she will fail to deliver. She’ll be gone by Christmas, I’m sure of it.

Note too, that the Prime Minister claimed his government, seemingly in contrast to Johnson’s, will be one of “integrity”. It will take a lot for swing voters to buy this, and it is not a great start to appoint someone who showed anything but integrity in the short time she was in office. She’ll come back to bite Sunak, and when she does, she will hinder the PM’s efforts to repair the Tory party image. People will ask, why did he do this? And the truth will be that it was to win his leadership election. Sleaze? Deception? Corruption? Maybe it’s just politics.

Then there is challenge number three: sell austerity 2.0 to the public. Vote for us at the next election and we will keep up this cutting. You know how everything in the country feels broken at the moment, how you can’t get a GP appointment, how public transport is consistently not delivering, and school results are plateauing…well, we’re gonna reduce the spending on those services. Can we count on your vote? 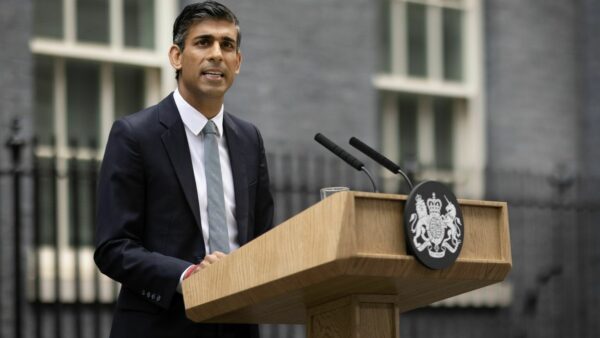 It sounds impossible but, of course, it isn’t. David Cameron ran successfully on a platform of reducing public spending and the opportunity offers any Conservative leader the perfect line of attack against their Labour opposition: “We are prepared to make tough choices in the national interest, whilst you just want to spend, spend, spend.” It’s a compelling line. Who would trust a party that wanted to spend with an empty wallet?

Cameron even had the benefit of a Labour Government in office during the 2008 financial crash, so he could add to his line: “not only are we the only party prepared to take tough decisions but this is all happening because of Labour!”

Similarly, the new Prime Minister must justify these cuts in the knowledge that the electorate believes Truss’s mini-budget, and, by extension the Tory Party’s, is partly the reason the PM feels he must make cuts. Cameron successfully justified his cuts by blaming Labour for the economic situation of the country.

Sunak will not be able to pull off the Cameron trick. He would have to blame his own side.

Although, perhaps I’m being unfair. Sunak could well be the most effective Conservative leader in a long, long time; certainly in comparison with his immediate predecessors. But if he is to avoid political failure and oblivion, he has a mountain to climb.

Whether it’s his party’s unity or its image, or the nature of his offer to the country at the next general election, it will not be an easy sell. He may well have told his party they must “unite or die”, but there is a fair chance that his in-tray – shaped by his cavalier Tory predecessors – will spell the death of his premiership.

The ‘feminist icons’ who have betrayed feminists

Adam Levine, Ned Fulmer, Rex Orange County: What did these three men do to betray feminism and how can we prevent this from occurring again?

After another weak COP summit, how can our leaders do more to ensure that we prevent disaster?

You’re not a celebrity Hancock, get out of there

Amid his farcical tenure as Health Secretary, treating Matt Hancock as a celebrity in the jungle is an insult to millions

The lack of representation is evident on all fronts of UK political parties, but how will Labour answer in the face of substantial ethnic minority and female contenders?