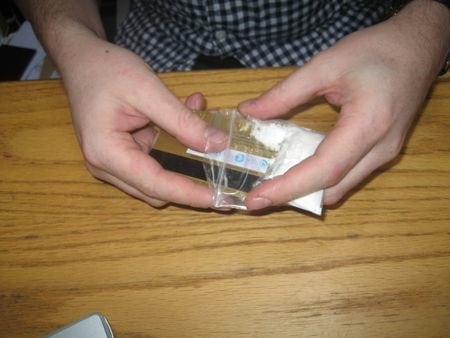 The chemists are winning

Sarah McCulloch investigates our relationship with Mephodrone, until recently the drug du jour among many students, and asks whether our entire debate on the use of legal and illegal drug use needs to change.

In April 2010, after a media storm, the British government passed legislation to classify Mephedrone as a Class B drug. Mephedrone is a stimulant somewhat similar in effects to MDMA and cocaine. It is chemically based on substances found in the African stimulant Khat, but it was sufficiently chemically different to not have been previously included under the Misuse of Drugs Act, which regulated drugs in the UK. The drug was actually first synthesised in 1929, but rediscovered in 2003 by chemists looking to manufacture a “designer drug” that could get round existing drug legislation.

Mephedrone first started hitting the news in late 2009, but as the scaremongering grew so did the coverage. By early 2010, the papers were full of tales of people who had allegedly become addicted to the drug. A particular highlight was a story in The Sun, detailing how a man had ripped off his own scrotum under the influence of Mephedrone (which later turned out to have been an internet hoax taken seriously). The General Secretary of the National Association of Head Teachers called for a ban after two teenagers in Scunthorpe died after allegedly taking the drug.

After the ban, the coroners’ report for the two discovered that neither had taken Mephedrone and they had, in fact, been out drinking alcohol the night they died. Subsequent studies have determined that, of the dozens of deaths linked to Mephedrone worldwide, only two have ever been conclusively proven to have actually involved that drug as a cause of death – but the media wasn’t going to let facts get in the way of a campaign against this ‘deadly killer’.

Mephedrone was available at every house party and ‘headshop’ and accessible from just about any house with an internet connection. You could buy anything up to 20 grams at a time from online sellers, giving you a bulk buy price of £4 a gram. Purity was high, and dosage cheap. However in April 2010, despite the misgivings of several
advisors of the Advisory Council on the Misuse of Drugs, including its former chair, Professor David Nutt, who protested that Mephedrone and its effects were as yet not researched, with a much longer timeframe needed to investigate it.

Alan Johnson, the former Home Secretary, made Mephedrone illegal, claiming, “Mephedrone and its related substances have been shown to be dangerous and harmful”.

You can, of course, still buy Mephedrone in Manchester, though the price has gone up to £20 a gram from £10 when it was legal. However, purity has dropped significantly since control of the supply has shifted from people buying it off wholesalers on the internet and into the hands of people who have a financial incentive to cut it with
anything from talcum powder to concrete dust. So you can still take the drug if you have the cash, but now it is not just illegal, but also much more dangerous.

People also forget why Mephedrone suddenly became popular so quickly; more than the price, its perceived purity was much higher than other available street drugs and that appealed to users – no one would choose to take worming powder, after all.

Cocaine purity had fallen from 60% in 1999 to 22% in 2009; people were literally getting less bang for their buck. More significantly, 33 tonnes of Sassafras oil, the precursor to MDMA and a vital ingredient, was seized in Cambodia in June 2008. It has been estimated that it could have been used to make 245 million doses of MDMA. Such tightening of controls on Sassafras oil and other substances meant that purity tests in mid 2010 have revealed that virtually all the pills seized by the police didn’t contain any MDMA at all – and 20% of pills seized since 2009 contain Mephedrone. Market forces drove people to Mephedrone, and when the cost and the convenience became too high, people just moved onto something else.

Other drugs have been in the pipeline since the banning of Mephedrone. NRG-1, or Naphyrone, a stimulant chemically similar to Mephedrone, was banned two months after Mephedrone on the same grounds. ‘Ivory Wave’ was the latest legal high to hit the headlines in August, though it seems no-one is really sure what it is. Producing intense euphoria but with a vicious comedown, some test samples have discovered it contains MDPV, or methylenedioxypyrovalerone, a cathinone which was banned at the same time as Mephedrone. Mephedrone itself was banned shortly after the well-publicised criminalization of GBL, BZP and Spice last December. So with those out the way, we can just wait for the next legal high, and the next one, and the cycle of discovery-use-popularity-ban can continue.

Of course, in the excitement of talking about the dangers of Mephedrone, Ivory Wave and the next deadly designer drug that will come along, people forget about the most lethal legal highs, simply because they are embedded into our culture: alcohol and tobacco.

Tim Hollis, the serving Chief Constable of Humberside Police and chair of
the Association of Chief Police Officers’ drugs committee is currently the most senior police officer to call for the decriminalisation of possession of drugs for personal use.

His greatest concern, however, was not illegal drugs. Hollis stated, “My personal belief in terms of sheer scale of harm is that one of the most dangerous drugs in this country is alcohol. Alcohol is a lawful drug. Likewise, nicotine is a lawful drug, but cigarettes can kill.

“There is a wider debate on the impacts to our community about all aspects of drugs, of which illicit drugs are one modest part.”

The facts bear Hollis out – 25,000 people are killed a year by alcohol-related illnesses, and 106,000 people from smoking. By contrast 3000 people a year die as a result of all illegal drugs combined, including 10 from ecstasy every year, and precisely none whatsoever from Mephedrone, LSD, or even Cannabis, the most widely used illegal drug in the UK. Despite strictly regulating advertising, taxation and labelling, no government has sought to ban either alcohol or tobacco.

It seems likely that the endless government attempts to ban every drug under the sun sold for recreational use will continue to push users into more and more unknown, and therefore more dangerous, drugs. The research done on the more conventional street drugs, such as ecstasy and LSD, now fills whole libraries – more recent research is even starting to turn up medicinal uses for drugs that have previously been the exclusive remit of trippers. LSD, for example, was discovered in 2006 to be unexpectedly effective at curing cluster headaches, a condition where sufferers can have headaches so painful and debilitating that some have committed suicide. It seems unlikely that LSD will be available on prescription anytime soon, however, through long study and, yes, usage, scientists have determined that LSD is safe and in
some cases, useful. The same cannot be said about Mephedrone or any of the legal highs.

The race between amateur chemists developing new designer drugs that exist just outside the law and the government to try to ban them without any understanding of their long-term effects has now been running for forty years – and the chemists are winning. But as recreational users are pushed more and more onto drugs about which we know less and less, a better question than “Who are the winners?” might be “Who are the losers?”