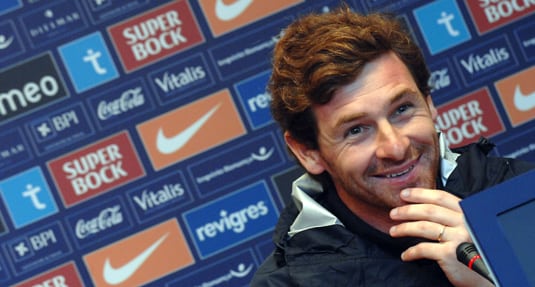 How quickly things change in football. Less than two months ago, André Villas-Boas and his Tottenham team were being booed off the pitch with disheartening regularity. Now though after an impressive run of four consecutive Premier League wins, it seems that the AVB project at Spurs is beginning to bear fruit.

Villas-Boas’s first three months in his new job have been far from easy and he’s shown remarkable resilience. Most new managers are at least afforded a honeymoon period, but the Portuguese’s appointment as Spurs’s Head Coach was received largely with pessimism and disapproval.

There are two main issues that most people have with Villas-Boas. The first is his reputation-shredding tenure as Chelsea manager, and the second is that he’s the man who’s replaced the darling of English football, Harry Redknapp. There’s a sizeable bloc of Spurs fans whose devotion to their wheeler-dealer messiah means they’re unlikely to ever warm to the new boss.

The media has scarcely been kinder. Journalists and pundits have been lining up to take pot-shots at Tottenham chairman Daniel Levy for his perceived foolishness in hiring Villas-Boas. Former Spurs player and manager Glenn Hoddle has branded the appointment “more than a slight risk”. Elsewhere, AVB’s numerous critics have used words like ‘gamble’, ‘failure’ and ‘doomed’ with ceaseless vigour.

I must admit that I too was sceptical at first. Like almost everyone else I struggled to see past the nightmare that was his only other job in English football. I hoped Levy would go for David Moyes, not just because I thought he’d be the best man for the job, but also because I was intrigued as to how he’d do on a considerably larger budget than he currently has at Everton.

However, after looking at the appointment thoroughly and objectively, I think Levy made the right choice. I am now (apologies in advance) an AVBeliever. I’ve been arguing his case for a while and I’m finally starting to feel vindicated.

Having watched each of Tottenham’s matches this season, it’s fairly obvious that Villas-Boas has changed how the team play, in a subtle yet definite way. Under Harry Redknapp, Spurs’s game was based on fast, counter-attacking football, and it still is to an extent. But now further dimensions have been added to their play, and Villas-Boas’s vision for the club is clear.

A devotee of the 4-3-3 (and its cousin, the 4-2-3-1), AVB has, unsurprisingly, got the team playing in much the same style as his Porto side of 2010/11, with whom he enjoyed so much success. A high defensive line has been employed, as has the tactic of relentless pressing of the opposition high up the pitch. The team is still focused on speed, but steel has been added to the midfield to help retain possession and dominate in the crucial area of the pitch – something they struggled to do last season. The idea is to make the pitch as small as possible when the other team has the ball, limiting their options, and then to stretch it when on the attack. Without sounding too hyperbolic, it’s very much linked to the same ethos of ‘Total Football’ on which the great Netherlands and Barcelona teams have been built.

The team plays in this style, and does well, for most of each match. But not being accustomed to the new system, they look as though they don’t yet have the endurance to maintain such a demanding game for 90 minutes, usually running out of steam after about an hour. The stamina will come though, and Villas-Boas will also buy players who are better suited to his tactics. They’ve shown glimpses of real potential so far, and when they get up to speed they’ll be a handful for even the best teams.

During his Tottenham side’s spectacular collapse last season, Harry Redknapp’s flaws as a manager were harshly exposed. Once other managers figured out how to negate Tottenham’s ever-attacking, tactically-primitive 4-2-4, they went on a long run of poor form which ultimately cost the club Champions League football, and Redknapp his job.

What Spurs fans will find most refreshing is Villas-Boas’s strategic nous, and his ability to tailor the way the team play according to the opponent, sometimes mid-match. It’s the very thing Redknapp was unable to do and it’s the thing that’s stopped Spurs from becoming title-contenders. It’s all well and good to have an effective style of play, but to be successful over the course of an entire campaign a manager needs to have a Plan B (and C) up his sleeve.

With every day that passes, Villas-Boas looks more comfortable in his role. His team is thriving in the new system and results are following. Their historic win at Old Trafford was a real coup and many are tipping Spurs for a serious top-four push once again. As the off-pitch circus that is Chelsea Football Club rolls on, it’s becoming clear that last season’s fiasco wasn’t entirely his fault and questions over his man-management have died down somewhat. Contrary to ‘expert’ opinion, AVB could be at Tottenham for a long time yet.