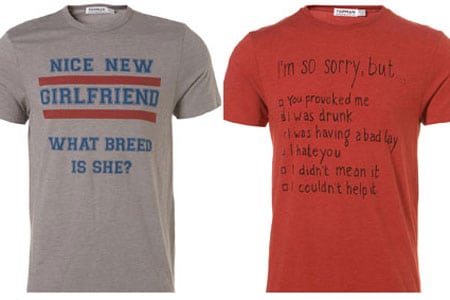 Sexist, or just a joke? Photo from tntmagazine.com

And so it is; in this so called ever changing and accepting society we live in, misogyny has slyly crept into the mainstream. But why did it take so long for a complaint to be made?

If anybody out there uses the internet a generous amount (and yes students, you probably do) you may have come across the infamous ‘Being a Dickhead’s cool’ video: the portrayal of people who have “20 20 vision just a pair of empty frames” and enjoy taking photos that are “new age…with a vintage feel”.

And thus, the indie/Britpop/alternative/whatever else you want to call it genre was created. And the tongue in cheek slogan t-shirts came along with it.

High street giant Topshop has been under scrutiny this week for stocking Topman with t-shirts that embellished on them are the slogans “Nice new Girlfriend – what breed is she?’” and “Sorry I was…” with a series of tick boxes with answers such as ‘I hate you’ and ‘I was drunk’.

The irony that is supposed to be induced from this just doesn’t cut it as a reason for production. But sadly, it means that there is something deeper engraved than just casual misogyny.

The fact is that people who work for Topshop and those who are a part of the conveyor belt of production of these shirts are playing a part way before they came to the forefront of consumers. It could have been seen and resolved before mass production.

But this also raises the issue that casual sexism is so acceptable that no one batted an eyelid at the slogans when being designed.

Of course, this is not the first time that clothing like this has been sold and not solely against women. The clothing brand David & Goliath produced t-shirts with the motto “Boys are stupid. Throw rocks at them”. This even became branded onto stationary which was readily available for the tween market.

The problems raised are nothing new and casual misogyny is so common place in society that clothing like this unfortunately becomes nothing but a shocked look, wagging finger and the whole world begins revolving again.

The t-shirts have quickly been removed from most Topshop stores, after receiving a mass of complaints.

The one good thing about these t-shirts may have been that they would have singled out which individuals are best to be avoided.