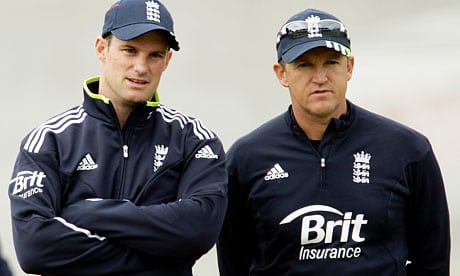 England’s victory in the 2005 Ashes series was breath-taking, captivating – the product of six years of the rebuilding and rejuvenation of English cricket.

A triumvirate of Duncan Fletcher, Nasser Hussain and Michael Vaughan oversaw a process which helped drag England from test cricket’s gutter – the sensational defeat of Australia a far cry from the 1999 loss to New Zealand which saw them propping up the ICC test rankings.

Yet rather than being a catalyst for dominance, victory over Australia was the swansong of a side soon to fall apart. Loss of form and injury ripped out the soul of the team, and what followed was the nadir moment of an Ashes series whitewash defeat in the winter of 2006.

So, the rebuilding process started again – and after a calamitous interjection which saw Peter Moores and Kevin Pietersen flounder as coach and captain – Andy Flower and Andrew Strauss have overseen one of the finest periods in England’s test history.

Under Flower and Strauss, England have won eight and drawn one of their last nine test series – including Ashes successes both home and away against Australia. Total domination – culminating in this summer’s thrashing of India- has seen them soar up the world rankings to number one.

India had arrived in England as the world’s best. They left not only without that mantle, but also with little pride intact. Whilst Indian hopes were hindered by the loss of star bowler Zaheer Khan to injury, only Rahul Dravid rose above and produced beyond the abysmal dross India served up all summer.

Yet this shouldn’t take away from England’s victory. For whilst India were woeful, England were majestic.
The scale of England’s achievement should not be underestimated. Not only did they reach the number one spot by beating the supposed best team in the world, it was also only the seventh time in Test match history there has been a whitewash in a series of four games or more.

It was a team performance of the highest calibre. At some stage nearly every individual made a significant contribution – there are no passengers in this England side. The batsmen consistently posted unassailable first innings scores, the bowlers took 20 wickets in every game and only once did they allow India’s batsmen to eclipse 300 runs.

Under Strauss and Flower England have developed a winning mentality akin to the Australia of McGrath, Warne et al. They head to the sub-continent this winter as the world’s best, confident that unlike 2005 this is the start of a legacy, not the end.