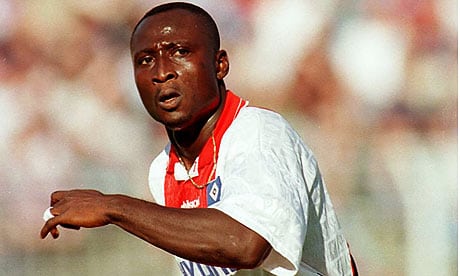 Where Are They Now? – Tony Yeboah

Only a handful of players can lay claim to leaving their legacy not just on the game itself, but in the vocabulary of it. Throughout the years playgrounds and parks alike have seen countless punters attempting the ‘Zidane’, with that signature, graceful pirouette; or perhaps the ‘flip-flap’ that Ronaldinho introduced to us; or maybe, perhaps most famous of all, the ‘Cryuff turn’ was employed.

All new additions to the footballing lexicon seem to relate to a particularly special moment of imagination or creativity, a moment which incorporates all of footballs bywords for ‘sublime’: grace, beauty, skill, technique. Yet, none of these football icons left us with an appropriate phrase to describe something equally as magical; a moment of explosive power, of thunderous speed, of raw strength.

That was until the 1995/6 Premiership season, when Tony Yeboah unleashed an absolute miracle strike against Wimbledon, crashing the ball in off the underside of the bar in the fastest unofficially recorded strike in Premier League history. This goal of the season winner, along with his other explosive 30-yard volley a month earlier against Liverpool, cemented the ‘Yeboah’ in footballs vast and ever evolving dictionary.

As Urban Dictionary attests, a Yeboah is ‘the term given to a goal that is scored via the underside of the cross-bar from a particularly powerful strike’.
After leaving his mark on English football with Leeds United, Yeboah moved on to enjoy more success with Hamburg in 1997, before ending his career with a small stint at rich Qatari club Al-Gahrafa. Following his retirement in 2003, he set up his own hotel chain. Called Yegoala Hotels, the 3-star chain operates in Ghana and claims to provide a ‘distinct world of luxury, seclusion, romance and relaxation’.
Yeboah was also the centre of a bizarre sex scandal that emerged in early 2011. According to ex-striker Peter Ndlovu, Yeboah slept with Zimbabwe coach Charles Mhalauris’ wife after Zimbabwe humiliated Ghana at the 2006 African cup of Nations. Yeboah, a proud Ghanian, allegedly confided in Ndlovu – ‘When a man insults my country, I insult him by taking his woman’.

Tags: Sport, Where are they Now