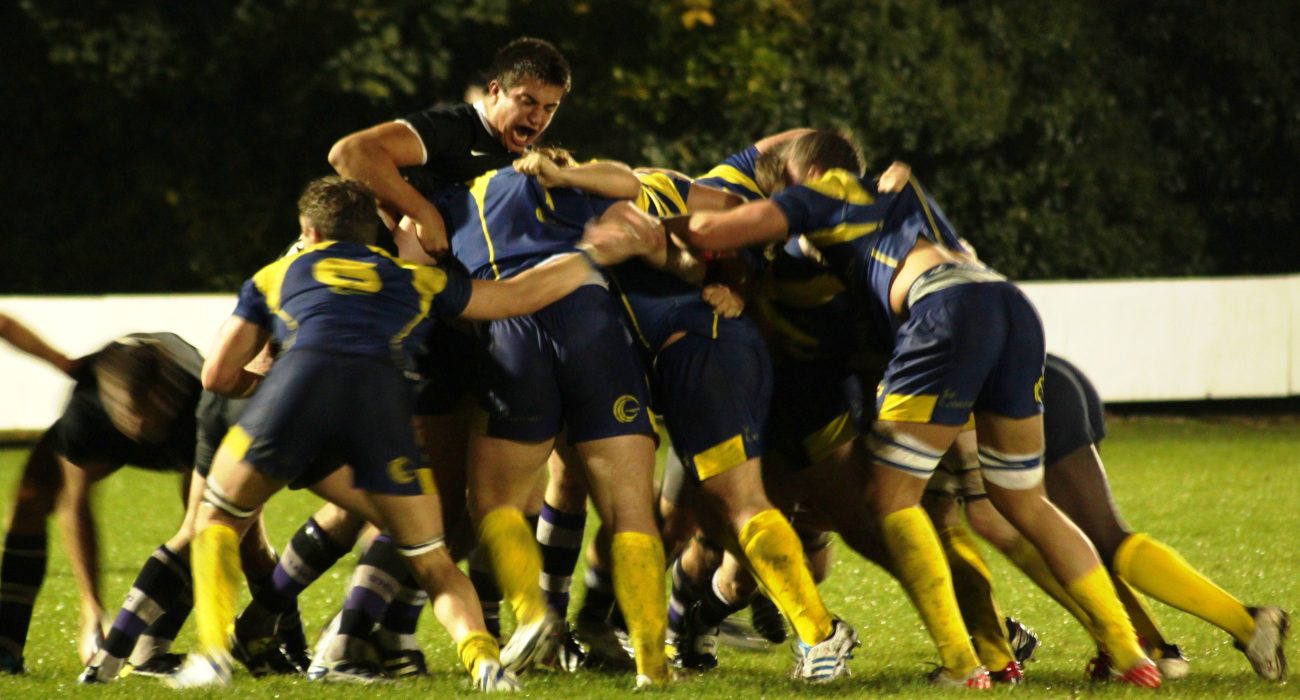 When two tribes go to war…

Beer-fuelled spectators, testosterone-driven competitors, inebriated streakers – a potent cocktail to enliven even the dampest autumnal evening. But add in one final key ingredient – a fierce rivalry between two universities who share a city – and the stakes are raised dramatically.

So when the University of Manchester renewed hostilities with Manchester Metropolitan University on Wednesday night for the annual Rugby Union Varsity match, it was no surprise that the abundant tension spilled over inside the first ten minutes. Tempers flared on the benches as the game’s first rogue tackle precipitated one punch, then another, then another, all in the name of institutional pride.

It wasn’t long before the animosity that exists between these rival residents of Oxford Road boiled over again. “There’s more fighting than rugby to report on, as yet another score is settled on the far touchline,” reported The Mancunion’s Tom Acey midway through the second half. Cue a new spate of handbags, soundtracked by the familiar refrain “you can shove your fucking redbricks up your arse” from the Man Met minority. And so it went on. I need not remind you of the final scoreline; suffice to say that the University of Manchester triumphed for the umpteenth year in a row.

On this evidence, it would be easy to conclude that the Uni versus Met rivalry is a bitter, deep-seated conflict – the angry by-product of a chequered history pockmarked by enmity. The truth is somewhat different. The rivalry that we saw played out in the first of many Varsity fixtures between these universities this year is more indicative of the heated nature of sporting battle – just go to any lower-league football match on a Saturday afternoon – than it is of a particular aversion on the part of one set of students towards another.

That is not to say that there is no needle between Manchester Uni and Manchester Met. It doesn’t take a genius to spout clichéd insults in either direction: for University of Manchester folk, it’s the suggestion that Man Met is somehow a lesser institution, populated by those who didn’t make the grade. Meanwhile, Man Met students hit back in the opposite direction with accusations of snobbery and privilege.

Internet message boards – those modern day barometers of keyboard warrior consensus – are filled with baloney specifying the apparently Babushka-like relationship between the various seats of further education that inhabit this great city. Take this particularly flippant post on The Student Room, for instance: “Manchester > Man Met > Salford”. To reduce three universities to such an arbitrary series of classification serves no useful purpose.

In the cold light of day, such petty insults are nonsensical – and I think it’s fair to assume that the vast majority of those who engage in similar tit-for-tat sparring (we’ve all been there) do so in a good-natured and light-hearted manner rather than with vitriolic intent. Apart from anything, the University of Manchester – a Russell Group university with a near 200-year history – offers a vastly different programme of degrees than its younger cousins.

As a budding physicist, Manchester – with its multiple Nobel Prize winners, including two current members of staff – is undoubtedly the place to go. But how about a high quality qualification in teaching? Man Met is recognised as one of the top teacher-teachers in the country. Salford University’s School of Music, Media and Performance, meanwhile, draws on Manchester’s phenomenal musical heritage to offer an unrivalled three year education in what it takes to make it in the music industry.

All of this is a long-winded way of saying that here in Manchester, our universities lack a truly great rivalry. Whilst Uni and Met are adversaries to some extent, their struggle is in its infancy. The rivalries that cut deepest are those which are forged over time, an accumulation of centuries of antagonism as generation after generation proffer increasingly outlandish stories as evidence that THEY started it; that WE are far superior to THEM.

Unquestionably, Oxbridge offers up the example greatest example of genuine inter-university rivalry. With a combined 1,500 years of history, Oxford and Cambridge can claim to be by far the most historic universities in the country and some of the oldest in the world. Not content with hogging the top two spots on any UK university league table worth its salt, they regularly compete for the title of best in the world. 41 of our 55 Prime Ministers studied at Oxbridge, but the influence of these two great seats of learning extends far beyond politics.

Scrapping over courts and quadrangles has become a way of life for those who inhabit the dreaming spires, with duels played out on sports pitches, on television and, most notably, on the River Thames. It is impossible to underestimate the significance of the annual Oxford-Cambridge Boat Race, with millions of pounds every year poured in punishing training regimes at top notch facilities. In recent years, lucrative scholarships have been handed out to encourage the fittest, strongest rowers from across the globe to study at Oxbridge – all in pursuit of a year’s worth of bragging rights, to be fought for over 4.2 miles of water on an otherwise calm spring Saturday afternoon. As it stands, Cambridge lead the all-time competition 81-76.

For all of those reasons, Oxford versus Cambridge is a confrontation which endures to this day; but more often than not, the conflict is eschewed in favour of inter-college dick measuring. (In the absence of any genuine rivals in their vicinity, the University of Exeter is similarly divided by halls of residence. Holland Hall, for example, has garnered a not unfounded reputation for housing only the wealthiest of Daddy’s little girls. Rumour has it that you can’t get in without an unkempt mane of bleach blonde hair and an Abercrombie store card.)

Indeed, the rivalry between respective Oxbridge colleges is perhaps even more intense than the university grudge match. Former students have gone as far as to construct league tables which rank Oxbridge colleges according to academic performance; the Tompkins Table (Cambridge) and Norrington Table (Oxford) respectively used by those at better performing colleges as a stick to beat those at ‘lesser’ colleges with.

When it comes to sport, it doesn’t get much more serious than the inter-college Cuppers competition. A plethora of sports are contested of the course of each season as colleges do battle in an attempt to demonstrate their superior sporting prowess. This is no friendly Wednesday afternoon knockabout: the 2006 Oxford Rugby Cuppers final descended into farce, culminating in a fight between the Pink Pembroke Panther and the St. Peter’s Squirrel.

Inevitably, the United States do rivalry on a monumental scale. Football, in particular, serves as the basis for vehement discontent between rival institutions, with the outright hatred between Ohio State and Michigan serving as a fine example. Whereas university sport in this country is first and foremost a social activity, college football is played in front Premier League quality stadia and can be the golden ticket to a multi-million dollar career as a professional footballer.

From an academic perspective, Harvard and Yale are America’s answer to Oxford and Cambridge. In recent years, Harvard can claim to have played a significant part in the founding of Facebook – kickstarted by Mark Zuckerberg in his college dorm – whilst Yale can count five of the last six US presidents amongst their alumni. “The Harvard-Yale rivalry is not substantial enough to merit attention,” Yale spokeswoman Gila Reinstein told Newsweek back in 2008. Harvardians and Yalies would doubtless attest that nothing could be further from the truth.

Comparatively, the University of Manchester – Manchester Metroplitan rivalry is trivial. Perhaps the absence of a despised adversary is lamentable – wouldn’t it be nice if we had some sort of yardstick which would allow us to rank ourselves against comparable institutions? Something more reliable than the ridiculous league tables which, depending on who you believe, rank Manchester as the 32nd best university in the world but only 41st in the country.

Then again, there is much to be said for the freedom that we have in defining ourselves as students of Manchester rather than soldiers in the fight against an apparently lesser alternative. To do so, to paraphrase Derren Brown, would be to describe yourself as an aphilatelist – and nobody defines themselves by the fact that they don’t collect stamps.

This article was corrected on 11 October 2012 to reflect the fact that the University of Manchester does offer the PGCE.