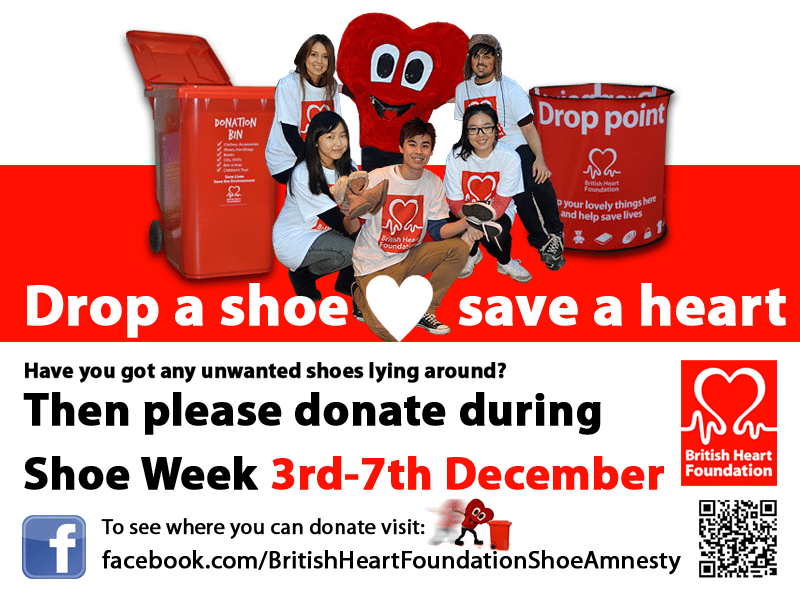 Shoe Amnesty is a campaign where volunteers from the Manchester Leadership Programme (MLP) are collecting good quality second hand shoes in aid of the British Heart Foundation. Bhagwan Manku explains why this charity is so worthwhile and affects so many people in Britain today:

‘’The volunteers are encouraging University staff, students, local retailers and members of the public to donate unwanted shoes to the charity. We are aiming to collect 599 pairs of shoes, based on the statistic that 599 people died from coronary heart disease in Manchester last year.

‘’Shoe Week is being held on The University of Manchester campus from Monday 3rd to Friday 7th December. Groups of volunteers will be situated around campus throughout the week by having shoe drop-points, engaging staff and students in the campaign. Look out for ‘Hearty’, the British Heart Foundation mascot who will be let loose around campus to spread the word too! In the build-up to Shoe Week, we have placed red donation bins in various locations throughout campus, and have already started to receive a steady stream of donations.

The British Heart Foundation is desperately in need of donations, and with stock like shoes that they can use the money raised to provide vital resources and equipment to heart disease patients. “Each pair of shoes on average raises £5.99 for the charity. Each £5.99 could provide a lifeline for heart patients.’’

Apart from donating all your old unwanted shoes, students are also welcome to get involved in the campaign.  ‘’We are looking for enthusiastic people to volunteer for us on Shoe Week, handing out flyers and really engaging with people about the campaign. As well as targeted university staff and students, we are also planning to target retailers across the city to see if they are willing to support the campaign and donate anything. If they are MLP students or not and are interested in doing their bit for this amazing charity, they can get in touch.”