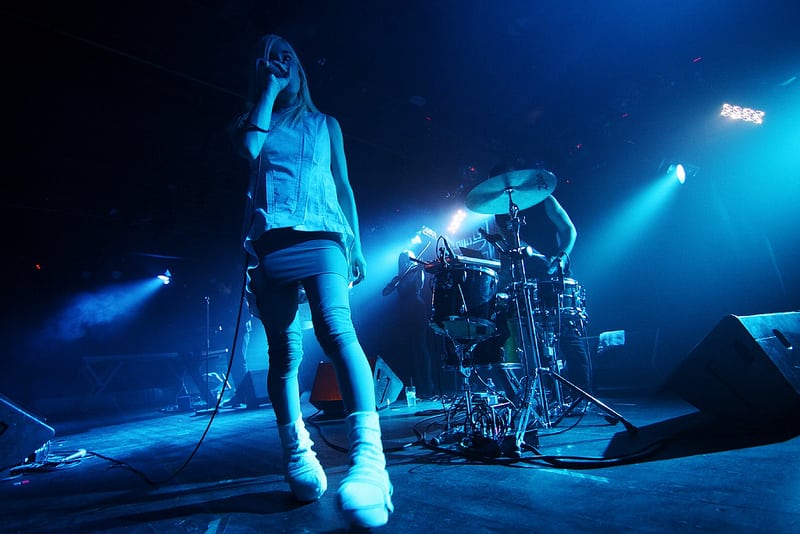 The evening after Halloween saw Future Islands play a rather special set in the beautiful surroundings of Manchester Cathedral. Having earned a reputation as one of this years most exciting live acts, combined with five upcoming acts supporting them on the line up, this was not an event to be missed.
Technical difficulties plagued East India Youth’s set, allowing him a rather measly 15 minutes to play three songs. The layered vocals of ‘Looking For Someone’, and the choral backing of ‘Dripping Down’ seem perfectly suited to resonate around the cathedral. As the electronic breakdown of finisher ‘Heaven, How Long’ gets the crowd shuffling, its seems a shame his set couldn’t have been longer.
Following EIY is Zola Jesus. Opening track ‘Dangerous Days’ presents her as a kind of dark and brooding Florence Welch. Her powerful voice and stage presence silences the audience, but her set and voice fall a little flat at points. Whilst her songs never seems to match the strength of her opener, it’s clear that she’s a talented performer and is definitely a one to watch.
Almost none of this seemed to matter, as Future Islands succeeded in blowing all the other acts out of the water. Their setlist focused heavily on their most recent album, Singles, but they also included several choice songs from their previous three outputs. However, it was frontman Sam Herring that really stole the show. Herring’s enigmatic performance made the show one of the most engrossing and memorable performances I have ever seen. The look of pain and passion on his face, coupled with his contorted dancing, injected the songs with so much raw energy and emotion it was difficult to tear your eyes away from him. If you ever get the chance to see Future Islands, do.