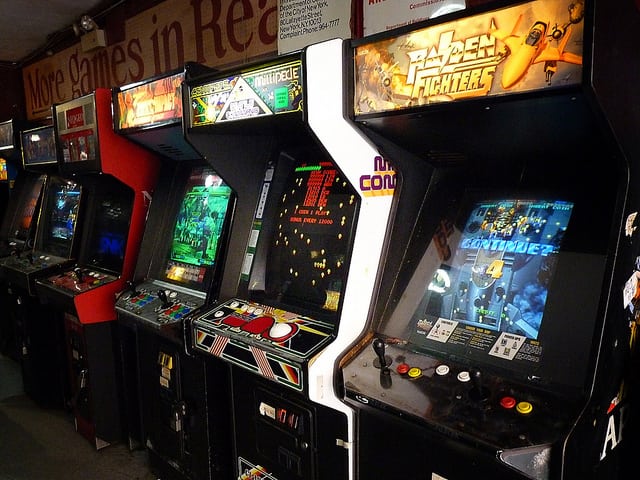 If on a Winter’s Night a Gamer

Towards the end of his novel If on a Winter’s Night a Traveller, Italo Calvino conjures an image of an abstract library, a spiritual place in which ghostly readers discuss the act of reading. For this feature I have adapted Calvino’s passage into a meditation on gaming. It is an obscure, pointless, thankless, and some might say wanky idea, but ultimately I write for myself, not for you. You’ll read what you’re given. Judi Dench on a banana boat. Fertile crisp dispensers. Chucklebrother turnip polish.

It is time for your tempest-tossed vessel to come to port. What harbour can receive you more securely than a great gaming arcade? The shops let you down—dependable second-hand games retailers closed their doors early, the GAME monopoly tried to rip you off, and those voucher codes you’ve been saving up inexplicably expired some days ago. It is with relief, then, that you step through the arcade’s gaudy entrance lighting to find the welcoming arms of a dozen bleeping machines ready to supply you with your next gaming fix. The clientele look as if they have been here for years, but you quickly dismiss this possibility—they are likely just seeking refuge from the dingy seaside by replacing its outdoorsiness with the cosy, unsupervised dinginess of the arcade lounge, which at least has a roof to protect its daydreamers.

Aware now that you have been hovering by the entrance, you move forward and crane your neck from left to right, to peek at the games the other players have chosen. You notice one woman is sat playing a racing simulator. Her body remains completely still in her seat whilst her arms, as if possessed, spasm at the wheel. Taking a horizontal stride around her chair in order to gauge her expression, you are surprised to discover there is an intense fixity to her gaze.

“Don’t be amazed if you see my eyes always squaring. In fact, this is my way of playing, and it is only in this way that gaming proves fruitful to me. It does not particularly matter to me which game I play at any given moment, as long as the experience enables me to sunder all connection from my physical reality for a few hours. During these hours I can give myself over to the simplified structures and mechanisms of the game, structures fine-tuned to gratify me at a constant rate, where my actions are authenticated definitively and where obstacles are made predictable and manageable. By retraining my focus, I begin to lose sight of the quotidian duties of life that at times seem insurmountable.”

“I understand you perfectly,” another gamer interjects, slumping against the door as his index finger swipes at the screen of his smartphone. “But I can only play games for a few minutes before I must turn my attention to other distractions. Gaming for me represents an in-between phase, a prelude to more engaging tussles. Unlike you, ma’am, I like my games to consist of just a single system, a single idea so acutely distilled that it is optimally enjoyed only in short bursts, and can be gently sidelined when those pressing ‘duties’ you mention arise.”

Across the arcade a siren goes off, and the aural disturbance is shortly followed by a visual encore of red and yellow flashes that dance over the ceiling. “Utter nonsense,” a third gamer cries out as he pumps his fist in the air. “Games give players the chance to establish dominion over virtual worlds. I have just now thwarted the efforts of a hundred anonymous players before me, players who believed they were destined to be masters of alternative realities. In honing a niche craft, I can proclaim myself to be the best plumber, sports player, or killer in the world, merely by inputting a series of buttons in a precise order. My talent gives me a license to wind up my friends, however few in number they might be.”

“I, too, like to test myself against friends and faceless rivals,” a fourth bursts in, “but for me it does not matter whether I am playing against them competitively or with them cooperatively. If I headshot my friend in a virtual world, for example, and proceed to teabag them gratuitously with a smirk on my face, that is not altogether different from helping said friend to stay alive in a separate game, or from relying on joint skill to tackle an objective together. In either case, the act of playing reinforces the bond I have with that person, a form of mutual understanding that goes unspoken. Gaming fills in the untapped spaces in my relationships with others by way of an arcane, non-verbal language that outsiders fail to grasp.”

“There is some truth in your outlook,” says a girl sat at a computer in the corner of the room, “although like everyone else here you seem to gravitate towards the predetermined objectives laid out by any given game. I prefer games that conceal their agendas, games that celebrate the very nature of play as an end in itself. Submerging myself in my own fictions is the way I concretize and give form to the playfulness of my psyche.”

A long shadow throws itself over the change machine as a suited gentleman rises from a bench. “My enjoyment of games is purely aesthetic. I have grown up alongside the medium and in my old age I find it fascinating to simply inspect the new techniques employed by modern programmers, the ways they try to preserve the veracity of their artifices. At the same time, I worry about the inadequacy of their solutions when the worlds they depict fall apart at the seams. When I play, I think of gaming technology as something still in its infancy, and hope that the missing piece of the jigsaw will be found in my lifetime.”

An expectant silence fills the room. The moment has come for you to speak.

“Ladies and gentleman, I am delighted to report that I can see elements of myself in all of you. Alas, your wisdom has put me in a pensive mood, and I no longer have the appetite to join you in your session. I will instead retreat to the games that play out in my mind, the vain visions I entertain of myself playing the everyday superhero, the dreams I have of going rogue in supermarkets, and rioting in the streets with cans of baked beans. It would be impossible to develop these visions into real games, but I find this fact reassuring. My experience of living can never be authentically condensed onto a screen. I will always be unknowable.”