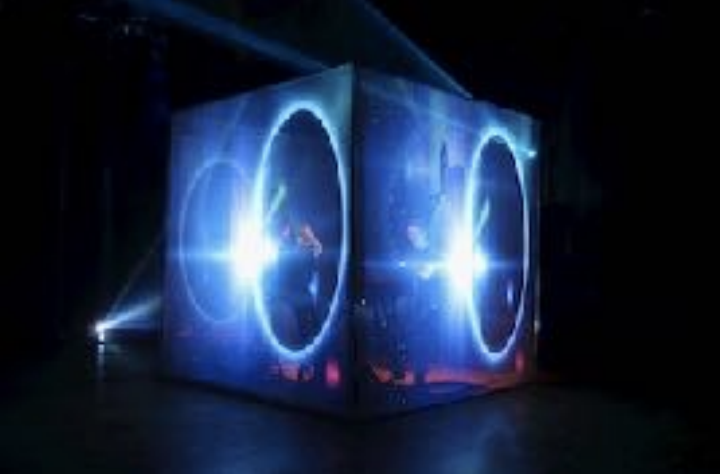 As a geography student and someone interested in the way the arts can be used to express scientific phenomena, I was intrigued by Manchester Science Festival’s ‘Sentinel: Climate Change in Sound and Light’ held at Waterside Arts Centre.

The piece was created, composed, and performed by Richard Evans, a composer who’s toured with Peter Gabriel as, and award-winning artist Valentina D’efilippo. Evans was joined by three others on a panel discussion before the piece; Professor of ocean and climate sciences Ric Williams, bio-ethicist Dr Sarah Chan, and Dr Joanne Pennock, an immunologist at the University of Manchester.

The panellists were engaging, interesting and clearly passionate about their expertise. They managed to cover a range of topics, despite the host who led discussions with a disinterested air and a conveyor belt of fairly repetitive and dull questions. However, the varied backgrounds of the panellists created an interesting dynamic and it was a shame discussions didn’t go on longer as I felt they had yet to run their course and there was only time for a few audience questions.

After a short interval, the 100 or so crowd filtered back into the small theatre for the much-anticipated light show. The hour and a half long piece consisted of a part-transparent box which enclosed Evans at a DJ deck and a singer beside him. The show began with swirling beams of light encompassing the audience and moving in soft sheets, flooding the room like the northern lights. On each wave of light, an abstract image of the Earth was projected creating a beautiful visual effect.

However, these soon disappeared in favour of strong beams which shone directly into the audience. The box itself was projected with visuals, some of which were abstract and visually pleasing, however, these brief moments of interesting graphics were interspersed amongst a chaos of imagery. These included stock-image-like film, most of which was repeated to a mind-numbing extent, undergoing crude and basic contortions, inversions, and video-editing.

The light and visuals were accompanied by a soundtrack described as ‘lush synths and electro rhythms’ the quality of which was poor. If concentrated within a two-minute burst the music may have been fairly interesting conceptually, however, it was teeth-grindingly repetitive. The techno sound was accompanied by a word-less performance by the singer whose voice was beautiful in its ability to soar and create atmosphere, yet each song lacked much to distinguish it from the last.

Like the imagery, the music was repetitive to the point of senselessness and the combination of intense sound, images, and light gave the impression of YouTube’s glitchiest, most-surreal animation combined with the newest demo of a sub-par Soundcloud artist. This was sensory overload to the extreme; torturous in parts — it was a painful onslaught of nothingness.

When the piece advertised the use of statistics, graphs, and data as the basis for the visuals I was excited. There are so many ways you can expand, rationalise, and engulf your audience by presenting them with exciting and abstract visualisations of otherwise dry data or by bringing enormous scales down to a level of human comprehension. However, the facts used in this piece were nothing more complex than anything one Google search could tell you, which, leading on from the interesting debate beforehand, was disappointing.

Not only that but the piece was split into short sections and each section featured one single fact. These facts and stats (some shown on graphs) appeared on the screen in an array of year 7 PowerPoint-esque variations of animation accompanied by the signature blinding light and soaring repetitive sound. Instead of expanding on each, the facts simply disappeared and reappeared multiple times before facing a few minutes of random and chaotic distortion which seemed to be time-filling rather than adding anything of value. The bizarre and cold presentation simply alienated the audience further from the bare and un-analysed statistics thus leading to an overall sense of indifference.

The issue is this was a music piece which lacked musical substance and variety, pitched as a science and art piece, which it was not. The artist’s ego took centre stage (literally) and his work seemed to be being forced kicking and screaming into relevancy. There are so many people making better work than this, who have mastered the ability to merge science and arts in a way that has beauty and relevance, integrity, and empowerment.

I applaud both the Arts Centre and the Science Festival for coming together to explore these ideas as well as the panellists who spoke with such passion. However, when you’re looking to combine art, music, science, and light you need collaboration, you need creativity, you need diversity, and you need a poignant and engaging narrative or perspective — this piece seemed to lack all of these.