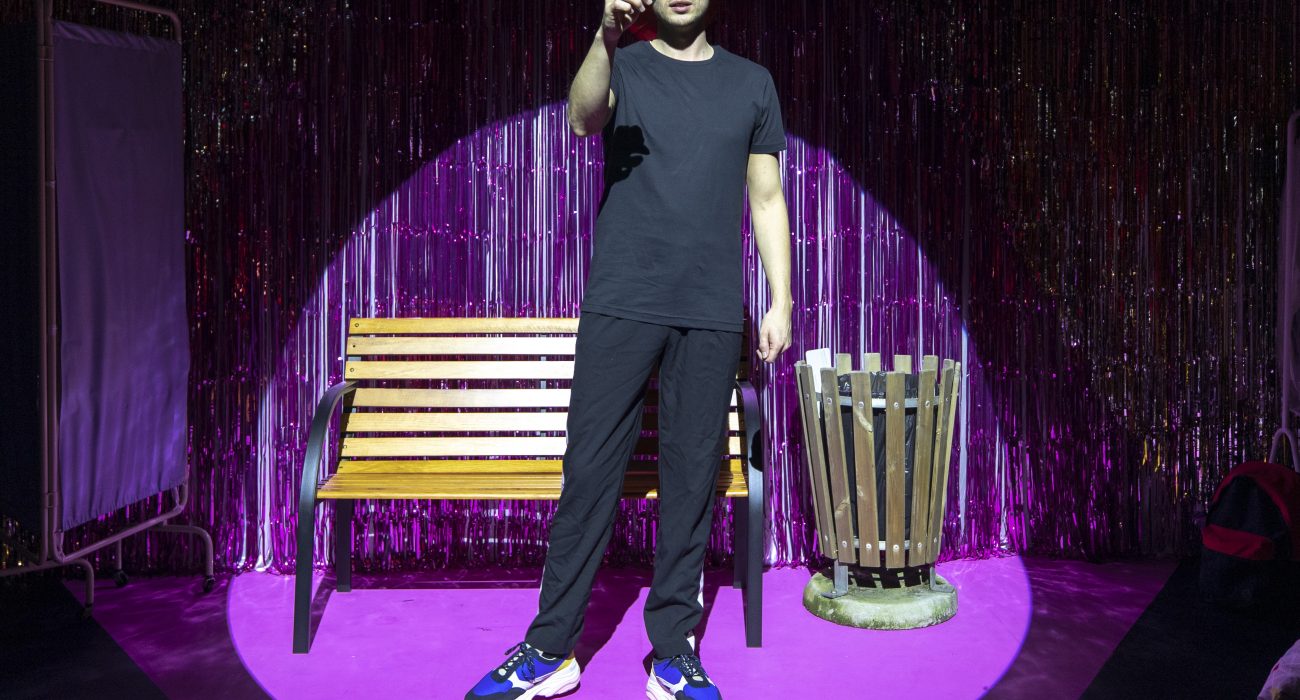 ‘First Time’ by Nathaniel Hall was a mediocre execution of an important and powerful subject. Hall’s one-man performance about his experience contracting and living with HIV was touching and educational. However, some of the gravity of his story felt lost due to the muddled performance style.

Hall started the performance well. Entering a stage strewn with glitter, balloons and empty bottles; Hall’s tone was conversational as he apologised to the audience about the mess left over from the night before. This witty rapport continued as he told the story of attending his high school prom as a closeted gay man (circa 2003). A hilarious sequence ensued where Hall invited a member of the audience to join him on stage. The couple slow danced to Evergreen by Will Young as Hall reminisced about the suburban heterosexual life he once thought that he wanted, complete with a Vauxhall Astra. (The Pop Idol joke was one of many early noughties references which went slightly over my head).

The comedic aspects of ‘First Time’ were undoubtedly high points of the performance. For example, Hall depicted his first visit to a sexual health clinic by becoming the character of ‘Sue’. He dressed behind a hospital screen, occasionally shaking out a gloved hand, in a style reminiscent of a burlesque show. Hall then emerged as a middle-aged NHS nurse who “just fell arse over tit in the lube cupboard!” This sequence was amusing and effective, Sue was warm and relatable which made it even more poignant when she told a 17-year-old Hall he had contracted HIV.

However, this section of the play was immediately followed by Hall, stood centre stage, reading from a sheet of paper all the things he had done after his diagnosis. This was theatrically unimpressive, and the statements seemed to have been curated for shock effect rather than to further the narrative.

Throughout the play light-hearted moments were often swiftly followed by shocking and grave declarations with no warning.  These drastic changes of tone repeatedly left me feeling uncomfortable and suggested a lack of care for the audience.

Some moments, unfortunately, were excruciatingly self-indulgent. At one point, Hall offered two rather blank faced audience members crumpled tissues from his own pocket and told them it was ‘okay to cry’. This moment embodied Hall’s entire performance, an important sentiment with poor execution.

The importance of Hall’s message must be noted. To have an HIV positive performer speak openly about their experience is a brilliant form of education and representation. The performance was created with support from The George House Trust — an excellent charity which provides confidential support for those living with or affected by HIV. I think the work Hall does with the charity, like speaking in schools is extremely important. Furthermore, the poetry that he has written and performed at vigils was both witty and moving.

Regrettably, Hall’s talent as a public speaker did not translate theatrically. His performance, although powerful at times, often felt clunky and without clear direction. It felt centred around his role as a performer rather than including the audience in a collective experience. ‘First Time’ tackled an important subject, however the performance needs honing if it is to effectively communicate a (potentially) very powerful message.