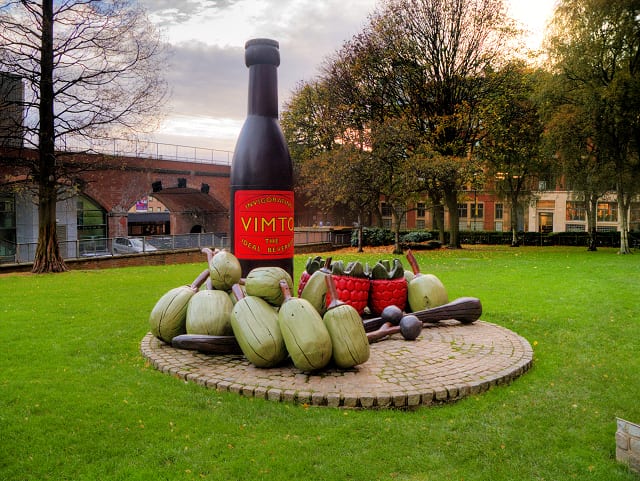 Every student has seen the iconic Vimto monument in front of the Sackville Street building. For me, it’s a reminder of pre-exam nerves and last-minute cramming on a bench, but what does this antiquated and unintentionally quirky statue actually stand for?

The monument was carved out of an oak tree that came from a sustainable forest in 1992 by Kerry Morrison, who then painted it and erected it in the exact spot where Vimto, the famously British soft drink, was first produced. The wooden sculpture commemorates Noel Nichols, an experimental herbalist, who created the internationally recognised beverage over a hundred years ago. Nichols found a market for soft drinks during the Temperance movement, when people began to take the negative effects of alcohol more seriously.

The Manchester-born soft drink started out as a medicinal tonic, originally called ‘Vim Tonic’, in 1908, as it would supposedly fill one with ‘energy, vim and vigour’ according to the old adverts. This was subsequently shortened to ‘Vimto’ after they decided to carbonate the drink and stop advertising it as medicine.

The entire piece was repainted in 2011, making it look as though it was installed far more recently than it was, and it therefore seems a little temporally misplaced. There is a nostalgic element to it, as if it’s trying to hark back to Manchester’s golden years.

The statue consists of a giant, old-fashioned Vimto bottle, surrounded by the fruits, herbs and spices that combine to create Vimto’s unique flavour, which is still used in restaurants and bars all over Manchester: In Northern Quarter, the ‘Manchester Martini’ and ‘Vimto Daquiri’ rely heavily on its fruity flavour, whilst The Refuge by Volta use it in their Red Cabbage. Even the Midland Hotel and Manchester House serve a Vimto jelly with their Sunday roasts.

This whacky yet iconic sculpture commemorates not only Vimto’s creator, Noel Nichols, but Manchester’s pride of the now internationally renowned soft drink.