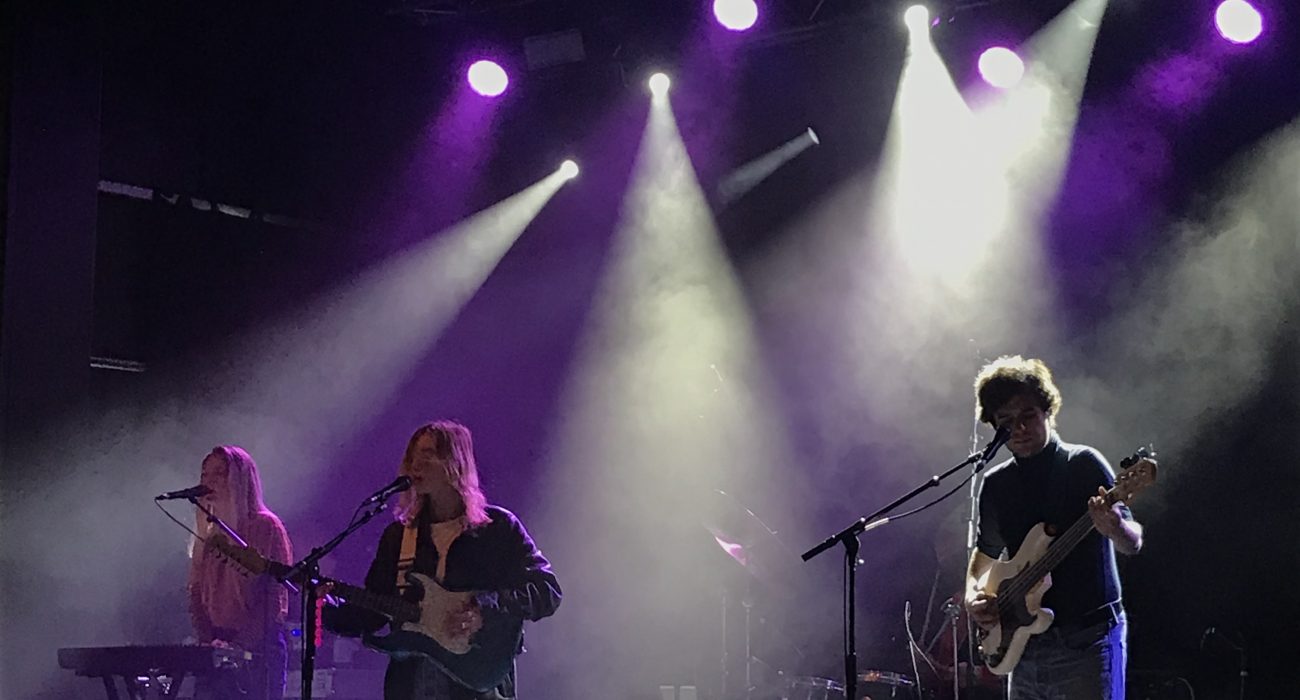 The last time I saw Amber Bain (The Japanese House), she had just re-emerged from a lengthy hiatus alongside her first taste of her upcoming album Good at Falling with transcendent single ‘Lilo’. Now, several months later, and with a beautifully produced debut LP at her disposal, Bain is embarking on a nationwide tour.

For a long time, The Japanese House has existed as an enigmatic presence in the music scene. Bain has never been one to hog the spotlight or relish in the fame she now finds herself in. Despite this modesty, the transformation undergone from those first shows and EPs has been nothing short of miraculous. As Bain strolls out to the stage, the room descends in to madness.

The set is full of surprises. Rather than relying too heavily on tracks plucked from the album, Bain manages to successfully weave a career-spanning journey across the night, even performing some songs that have remained relatively untouched in recent years. ‘Count to Nine’, the ethereal nine-minute epic from her fourth EP is used as a brief intro in to polished electronica ‘Face Like Thunder’.

With a setlist as diverse as this, it is clear to see just how much The Japanese House has changed, and in some ways remained the same. The contrast between the slightly more melancholic EP singles (‘Still’, ‘Cool Blue’, or ‘Clean’) and the electro-synth grooves of the album demonstrates a beautiful sense of development. This permeates Bain’s character as much as it does her musical soundscapes.

On stage, Bain is thriving, no longer shying away behind a microphone (which she coyly swings towards the audience at one point) and seemingly embracing her status as a talented, beloved musician. Whilst her lyrical content surrounds much what it always has – heartbreak, isolation, self-doubt – the instrumentation and melodic qualities of her album’s tracks is more energetic and vibrant, injecting a sense of life that prevents this sound from going stale. The collective maturation in melody, character and performance creates something truly special for both Bain and her audience.

The crowd themselves are on board with this transformed Amber. Joyous cheering and waving erupt sporadically, alongside screams of “We love you Amber!” to which Bain grins wryly. Even in the semi-acoustic rendition of ‘Saw You in a Dream’, and later ‘You Seemed So Happy’, the audience in Academy 2 is constantly jumping and bopping – something I’d never seen at The Japanese House’s shows. Credit is owed to Bain’s supporting band, who continue to elevate the entire performance with backing vocals and impassioned percussion.

As is the norm, the trance-like anthem ‘Clean’ brings the night to a close. Each live performance of this track becomes crisper and more dramatic than the last and this is arguably Bain’s most powerful song. A flurry of strobes and blue lighting create an unexpectedly frenzied atmosphere, with both the band and the audience darting around in a unified sense of passion. The tender refrain “All the years my soul, all the things you thought I did, this soulless kid was under all my skin” was hauntingly beautiful, as it always is – it was hard not to be moved.

The Japanese House has shifted from this impenetrable mystery to an open, yet unflinchingly raw artist with a name – Amber Bain. Great strides have been made both sonically and within her performance. If Good at Falling is anything to go by, the next chapter of The Japanese House will be nothing short of beautiful.