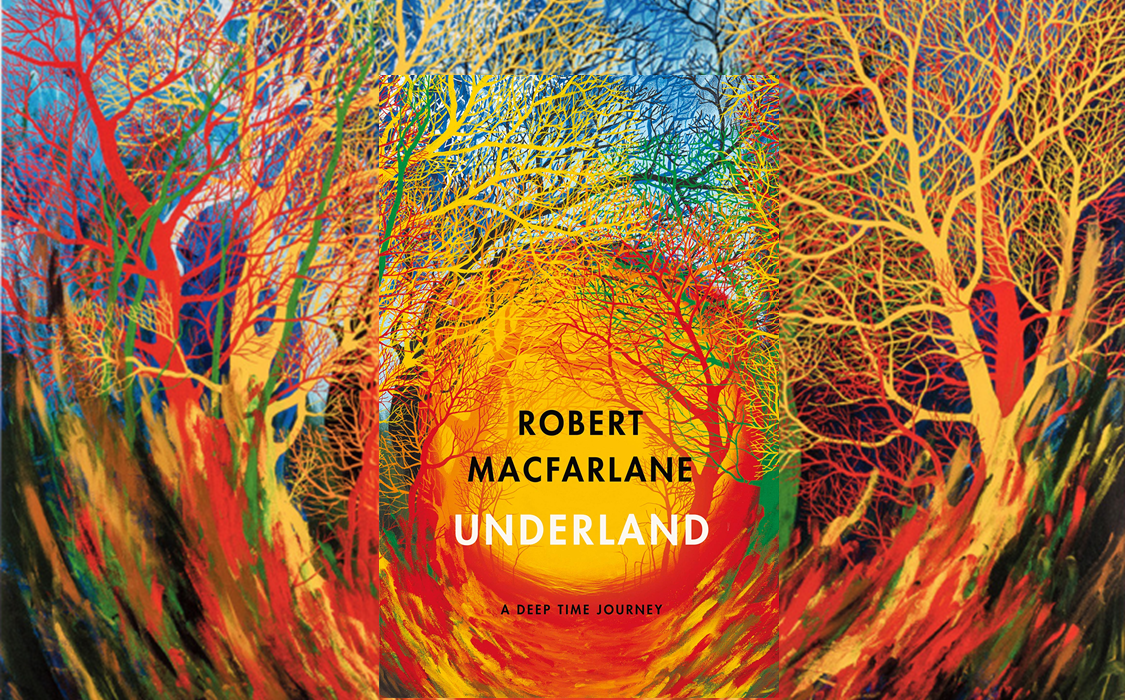 Robert Macfarlane is not an environmental scientist. He is foremostly a literary figure, who uses nature, and his relation to the Anthropocene, as his subject.

Macfarlane is a writer who rubs shoulders with the likes of artist Stanley Donwood, with whom he also collaborated on Ness, a hybridisation of word and image. Donwood’s vibrant piece ‘Nether’ splashes across the front and back covers of Underland.

Using this image has the effect of rendering the text instantly recognizable. Underland, however, is Macfarlane’s shift away from the quasi-comprehensible surface world he explored in works such as Landmarks and Mountains Of The Mind. Instead, in Underland Macfarlane turns out attention to planet Earth’s buried deep-time pasts, alongside imagined futures of the planet.

Macfarlane is a striking stylist. His writing is charged with a distinct poeticism, combining skilful poetic scansion alongside folkloric lyricism. He creates a narrative in which he is able to communicate a planetary sphere—a realm that Macfarlane names the underland—that is often neglected and only accessible in mainstream culture through films such as the frankly dismal Journey To The Centre Of The Earth.

Macfarlane’s literary training is evident throughout Underland, and he is unafraid to draw upon a range of literary figures—from Don DeLillo to Guy Debord—to elucidate on even the smallest of his arguments to widen the scope of a text to express the panorama of human experience.

Concerning structure, Underland is divided into three sections—or, as Macfarlane ever typical to his style, labels them ‘chambers’—in which he descends, before surfacing toward the conclusion of the text. Each chamber is introduced by Macfarlane with a poetic whirl of imagery. Macfarlane designs the underland and the unique mythologies and historical context that have shaped the ground beneath us, from the Cuban Missile Crisis to the effects of volcanoes erupting millenia ago.

Macfarlane takes a unique journey in each section, ranging through locations such as London’s Epping Forest and the Parisian Catacombs – my personal favourite section where I, at times, felt myself short on breath—before surfacing after an exploration of the boreal Scandanavian landscape.

In the final chamber, Macfarlane’s writing is at its best, particularly in the passage where he explores the artificial nuclear waste storage facilities that are being constructed to preserve the toxic remains of the Anthropocene. Macfarlane delves into these nuclear waste chambers and translates the unique codes that linguists and scientists have created to deter from future human intrusion.

These facilities are encrypted artificial spheres that lie underneath the ground, that if disturbed—by our future ancestors— would cause cataclysmic damage. Underland climaxes here, at the point in which Macfarlane oscillates between an imagined Utopian future and apocalypse, with the two finely balanced: our future a misstep away from annihilation.

While the book is tinged with elements central to the 2010’s nu-environmental critique and praxis—a critique performed by Extinction Rebellion and Greta Thunberg—Macfarlane signposts a wholly distinct form of environmental self-reflection. Underland states the claim that we should, firstly, consider our status as bipedal entities: an advanced species that talks, walks and stalks the Earth’s surface.

Macfarlane doesn’t just lay the claim we should merely coexist cordially with our immediate environment. Instead, Underland posits that we look with our heads turned beneath us; we should look to stories, rhythms, and voices that exist underneath our feet.