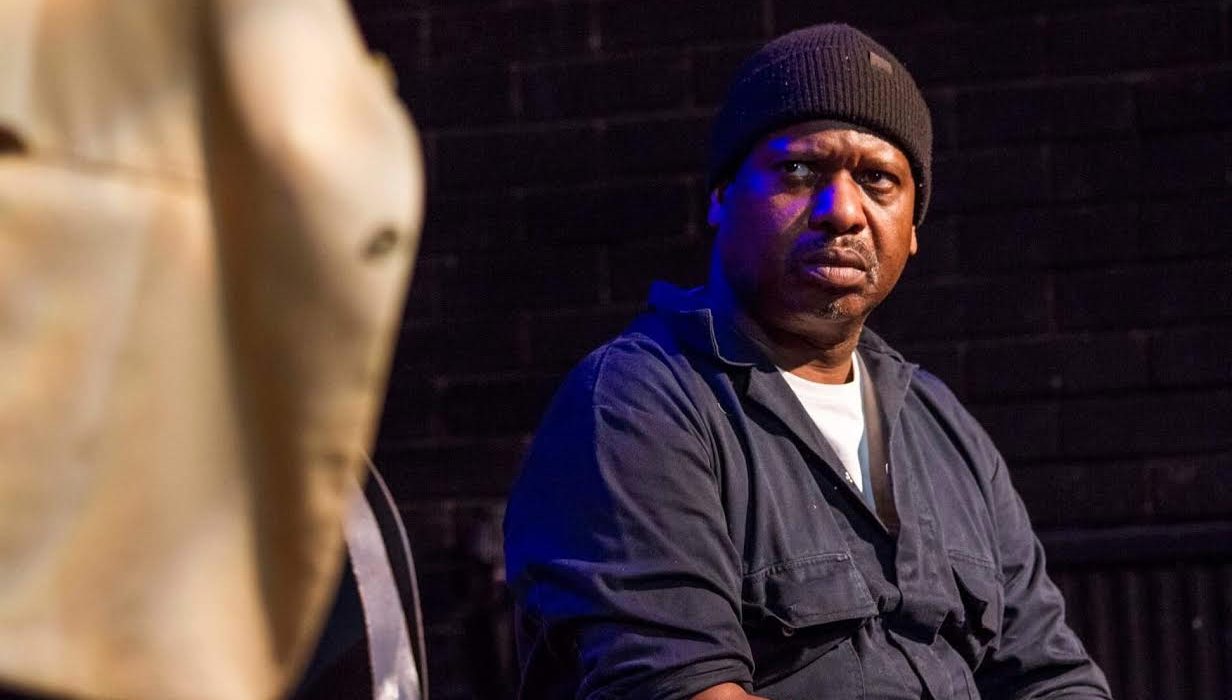 In the midst of Apartheid, two men; one white, one black, by a chance meeting, spend New Year’s Eve, 1989 together on what will prove to be a pivotal night.

Playland, the last play Athol Fugard wrote under Apartheid, is presented by Elysium Theatre Company. It is a truly riveting piece of theatre that explores themes such as the loss of youth, religion, race, and redemption.

At the dawn of a new year, the two men are forced to face the reality of their pasts. Gideon Laroux, a white retired soldier who fought against the internal resistance to apartheid, is a broken man suffering from PTSD. Martinez Zulu is the passive guardian of Playland, an abandoned amusement park in the middle of a scorching terrain. As the play unravels, both reveal their darkest sins. They are men who have been corrupted by their actions and, through them, the audience bare witness to the treacheries of Apartheid.

A truly poignant piece of theatre with impressive acting. Danny Soloman’s Laroux is a wild-eyed, chain-smoking alcoholic and inserts great energy into the performance. Returning from the war due to an injury, Laroux is bored and left alone with the scarring images of war. He appears at Playland looking for a party, something presumably to distract him from the guilt that rages inside him. Throughout the first half of the play, he gets progressively drunk and leery, spiralling him closer and closer to the edge of a breakdown. He keeps on returning to Martinez, searching for an answer; maybe that is with forgiveness or redemption: ‘Forgive me or kill me. That’s the only choice you got.’

Faz Singhateh plays the stern and highly religious Martinez Zulu with quiet conviction, providing an interesting counterpart to Soloman’s energetic performance. He is merely an observer; his repentant and religious perspective means he has little concern for the deceptive glittering lights of Playland. He does not run from his troubles.

There exists a kinetic tension between the characters which proves to be the backbone of the performance. Singhateh and Soloman develop the two men’s relationship with sensitivity and skill. Moments of light humour are woven into more serious ethical debates, which descend further into harrowing accounts of war and death. The two men come from completely different backgrounds and, yet, both sit under the shadow of ‘Number 6’. They are both guilty of breaking the 6th commandment: ‘Thou Shalt Not Kill’. Both are victims of their own sin. One holds up a mirror to the other, exposing weaknesses and internal struggles, which provides highly thought-provoking and entertaining theatre. Both actors perform with depth and sensitivity, creating convincing characters who are both a pleasure and, at times, difficult to watch.

The play takes place in the allusive Playland. Flashing lights, joyful music and a single speaker-phone create the illusion of a theme park. The two characters sit in a dark corner and watch on, isolated and insignificant to the rest of the world. Playland is a place of volatility where, for one night, people’s troubles are forgotten. As the night gets closer and closer to the New Year, the tension rises; the lights and the sound get more frantic. Laroux stands at the front of the stage, arms open, and cries: ‘Thank God it’s over’. It is not over, however, as he cannot escape his suffering. When the park shuts, the harsh darkness of reality sets in; it is a time when truths are confronted and the dawn of a new year begins. Martinez is the watchman of this strange little world: ‘Don’t worry white man; your Playland is safe.’

There are multiple meanings to this ‘playland’. But the one that resonates with me is its reflection upon the nature of theatre itself. The theatre has a similar kind of transience. Where, for a few hours, strangers are united; immersed in a narrative that allows them to forget the troubles of reality. Yet, once the houselights come up, we are once again strangers. The play is over, forgotten, and we must continue with our individual lives. As an audience member, I found myself in a sort of ‘playland’, where I could lose myself in the impressive acting and riveting storyline. It was a truly poignant and artful piece of theatre, one which I would highly recommend.