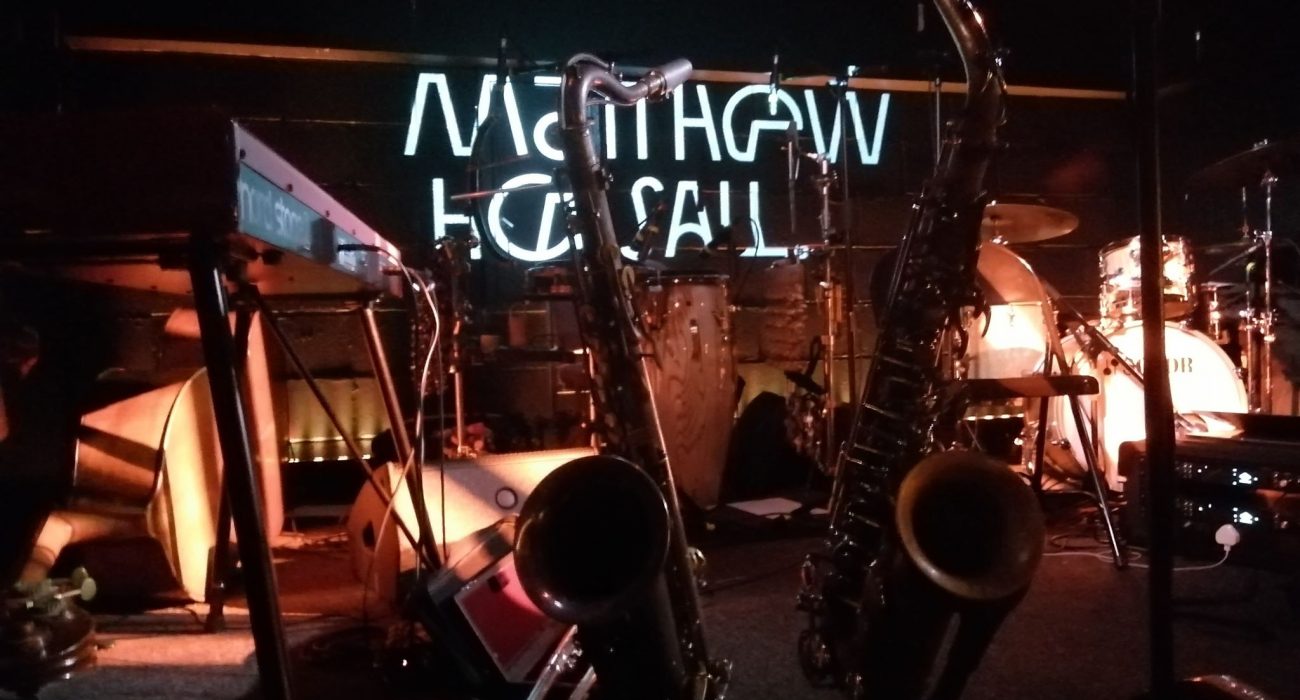 In May 1966 John Coltrane—alongside Alice Coltrane, Pharoah Sanders, Jimmy Garrison, Rashied Ali—recorded Live At The Village Vanguard Again! on Impulse! records. This was a quintessential live recording that I take as a prime rendering of spiritual jazz performance with ethereal whispering solos and sonic experimentation.

Fast forward to the present day—a glum Mancunian evening, far removed from the jazz clubs in Greenwich Village, NYC—and we arrive at Matthew Halsall at YES. This gig follows the release of the albums Sending My Love and Colour Yes with his label Gondwana, as well as an autumnal stint of previous sold-out live sessions at YES basement; a venue to serve as my spiritual snorkel for the evening as I would try to resist the lure of flat lager.

With Halsall on trumpet, the band included Alan Taylor and Jack McCarthy on percussion, Gavin Barras on bass, Matt Cliffe on reeds, Livui Gheorghe on keys, and Manchester University’s own Maddie Herbert on harp – whose upcoming show will take place at the Students’ Union on Wednesday 11th December.

The session was to be split between two sets, with the first half based around familiar material. Halsall introduced the session with tracks from Fletcher Moss Park to begin the occasion.

Stand out moments included Cliffe’s haunting solo on ‘Together’—taken from the new album—a track approached by Cliffe with the lyricism and breathless phrasing of Coleman Hawkins, but with the modern edge of Chris Potter.

The crowd—half seated—took awhile to warm to the first set. I imagine, though, like myself, they were rapt by the sonic unravelling at the hands of Herbert’s harp and her interplay between Halsall’s trumpet.

The second half was more expansive, with Halsall announcing that all tracks—bar ‘When The World Was One’—consisted of unreleased material, allowing for the second half of the show to serve as a public laboratory for Halsall.

Here Halsall’s band put a bit of a donk on it, with Cliffe’s soloing leaning away from modal sensibilities heard in the first set, moving toward territory reserved by charged ferocity of Albert Ayler.

Halsall’s solos, too, had their own diegetic impulses and his sound constantly opened new horizons. Halsall is a trumpeter who doesn’t exude hubris, despite the fact his solos are intermittently interrupted with vigorous snarls and growls.

A fault I did have was that I did not feel as though Livui Gheorghe on keys was given enough time or space to build on his own ideas, and I’d have liked to know more of what he could do—but this is a minor footnote to the performance.

Whilst there has been a lot of hot air in the music press about this newly conceived notion of the UK jazz explosion—with London as the epicenter for the emergence of this New-Sort-Of-Jazz-That-Is-Not-Like-That-Other-Jazz-Anywhere-Else—Halsall has been around for a while.

I don’t lump his music in with this ‘new’ generation of musicians (his seminal record On The Go was released in 2011). What’s more, Halsall’s music is distinctly Mancunian; it is informed by the spangled dampness of Mancunian rain, an impulse that London jazz cannot encapsulate—nor does it try to, in fairness.

Nonetheless, as well as a soundscape indebted to Manchester’s dismal weather record, Halsall’s sonic world is also haunted by the spectres and apparitions of ‘60s spiritual jazz, with this series of incredible basement sessions acting as the exorcism.