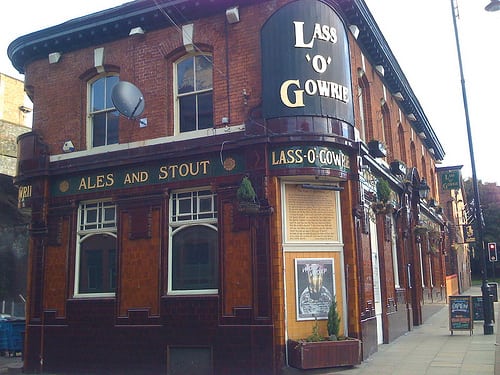 This being my first real review of a restaurant for The Mancunion, I approached the task of reviewing the Lass O’Gowrie, a public house located on Charles Street (or the pub next to Joshua Brookes for all you student hipsters), with the necessary enthusiasm and trepidation that any middle-class-southern-accented student would have when reviewing a pub up north. There was much contest amongst editors and friends as to who would be honoured with accompanying me; in the end, possibly through some drunken promises on The Mancunion social the week before, I took the lovely Music Editor, Sophie Donovan, who was of course wonderful company.

I like my pubs filled with interesting things to stare at for when the conversation drivels out, the Lass O’Gowrie delivers on that front; the entire pub is filled with all kinds of strange memorabilia, with giant portraits of Lando Calrissian and models of Sir Kill-a-lot (yes, of the Craig Charles hosted Robot Wars fame). But what of the booze? There were a fine selection of ales on tap, enough to suite any taste, and an even more exquisite selection of whiskies and wines. I of course panicked and chose what I considered the safe option of a pint of Old Speckled Hen, which was served at the perfect temperature – cool enough to be refresh, yet warm enough to bring out the subtlest flavour.

We chose to sit next at a table next to an old upright piano, as I chickened out of eating on one of the retro gaming tables (it seemed too strange to have my plate of food have a backdrop of space invaders). Claiming to have the best pies in the whole of Manchester on their website, I was eager to see what offerings the Lass had for me, I wanted the real Northern pub experience. I studied the menu intensely to find a meal of suitable masculinity which could match the amount I wished to perpetrate having. It was a tough call, but it had to be the Game pie, which was filled with all manners of woodland critters: rabbit, pheasant, snipe and pigeon – as if Elmer Fudd had gone wild with a mini-gun. Sophie was determined for some reason to come to a pub and order a falafel burger, of which I warned her was not correct pub protocol – it the dish that they used to sniff out us southern softies. Fortunately, the friendly staff were kind enough to inform us that they had ran out of falafel burgers and suggested another item off the menu, the far more wholesome Lamb Hot Pot.

The food arrived swiftly and was a generously portioned, as any a pub food should be. My pie served with huge, tender potato wedges and lashings of gravy. This was precisely the pub grub that I had hoped for, each bite making me feel less and less like a stuck-up student and more like a real man, my only gripe being that the crust was slightly charred, a taste closer to the mines than I had been expecting. Sophie’s lamb hot pot was also filling and large, complete with a slice of thick bread and a smattering of cabbage (although that was deemed slightly too sour).

Eating at the Lass O’Gowrie certainly was a refreshing change from the drivel of the students dive-holes like Footage and Queen of Hearts. For one thing the floor wasn’t sticky with last nights vodka red bull. It’s a unique place and a great dining experience if you’re looking for some decent pub food in the city centre.