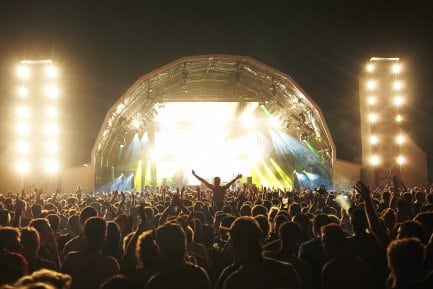 With over 800 artists booked over the 4 days of the festival, choosing one standout act is an extremely difficult task. Everyone had a favourite, and for me this was Jah Shaka, of the South East London-based Jah Shaka Soundsytem. His 6-hour set on the final night kept people going long after they would otherwise have been able to; it was nothing short of phenomenal.

This title must surely go to Skream; perhaps the only impressive thing about his appearances on either the Main Stage or the boat party, which he was supposed to be hosting, was his ability to drink. During the latter, this skill rendered him unable to play at all, while on the Main Stage it led to him being forcibly removed, numerous times.

For those that hadnˈt heard of them, Manchesterˈs very own Broke ˈNˈ English (who run their own night, Ballin’ On A Budget, at Mint Lounge) played one of the most surprisingly good sets at Outlook this year. Whether you’d heard of them or not, they were sublime.

Despite having to queue for almost everything, the official campsite, overlooking the clear and bright Adriatic Sea, was a beautiful place to be during the day, with various performers playing sets on the beach from sunrise to sunset. The abandoned fort, venue for the late music (6pm to 6am), was indescribable, and the individual venues in and around the fort were all superb in their own right.