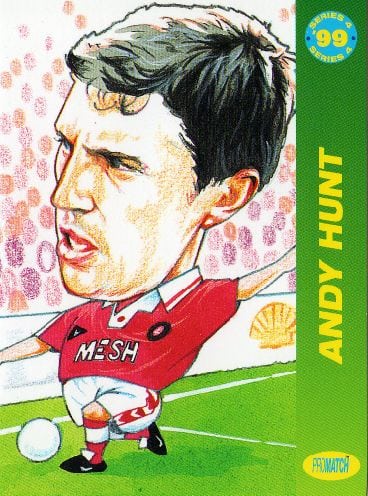 Where Are They Now? – Andy Hunt

The lower leagues have always been littered with journeyman strikers who play for numerous clubs without ever truly settling, Andy Hunt was no exception. Beginning his career at non League Kings Lynn, Hunt then moved onto Kettering Town before making his move into the professional ranks at Newcastle United in 1991. He then switched to West Bromwich Albion in March 1993, scoring a hat trick on his debut against Oxford. His opening goal in the playoff final against Port Vale at Wembley later that year proved crucial as Albion secured promotion to the First Division. Yet the most memorable season of Hunt’s career was probably his last when he propelled Charlton back to the Premier League in 2000, scoring 24 goals in the process. Sadly, disaster struck for Hunt the following year when he was diagnosed with chronic fatigue syndrome which brought his career to a tragically premature end. Despite this illness, Hunt had still managed to clock up 341 appearances in the Football League across a 10 year period, scoring 122 goals.

Not one to rest on his laurels however, Hunt moved into the travel and tourism industry. He and his wife now run the Green Dragon Adventure Travel Company from their home in the sunny climbs of Belize. The couples key attraction is their ‘Belize Jungle dome’ where holidaymakers can enjoy adventure activities such as scuba diving, Jungle safaris and horseback riding, before retreating to the quiet intimate resort which is described as ‘your oasis in the central American jungle’. It’s certainly a far cry from chilly afternoons up front with fellow journeyman Bob Taylor which were regular when Hunt turned out for West Brom! For more information on Andy’s Belize tourism attractions please visit www.greendragonbelize.com.