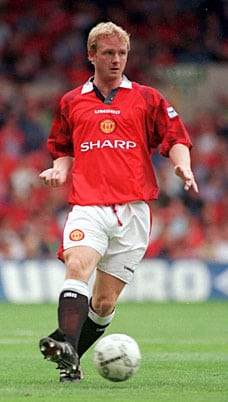 Where are they now? – David May

David May will be most fondly remembered by the Old Trafford faithful as a steady centre half who was equally comfortable playing at full back. Playing the majority of games in his career at Blackburn Rovers, he finished runner-up in the Premier League in the 93/94 season before being signed by eventual league winners Manchester United the following year. May had a lucrative career and managed to bag himself two Premier League titles, two FA Cups, two Charity Shields and a Champions League winner’s medal; not a bad haul for a player who was often the understudy to preferred partnership of Bruce and Pallister.
Today, May earns a living as a winemaker importing his new range, ‘Mayson Ridge’ from South Africa, with the ‘May’ coming from his name, the range includes: a Chenin Blanc, Sauvignon Blanc, Chardonnay, Cabernet Sauvignon and a Pinotage. He obviously has managed to develop an altogether more sophisticated palate with this array of drinks, than the combination of pre-match builder’s tea and post match lager he used to enjoy in his playing days.
May made recent headlines when he organised a charity event to ‘celebrate’ local rivals Manchester City’s 35 year spell without any silverware; which he was forced to be cancel by Greater Manchester Police, because of the threat of antagonising the blue half of Manchester. When not arranging charity fund raising events such as golf tournaments, which May has done previously to benefit Manchester’s Christie hospital, he works as a pundit on MUTV.
Although not one of the most talented players in the Champions League winning dressing room of ‘99, May’s popularity grew at United due to his relaibility; which saw him start in ’96 FA cup final victory over bitter rivals Liverpool. Despite an impressive trophy cabinet, May was voted 34th in ‘The 50 Worst Footballers’ by The Times, an accolade that he surely won’t pay too much attention too. Nevertheless his career achievements speak for themselves as the Stretford End were all too keen to remind his former Blackburn team mate with the words, “David May, superstar! Got more medals than Shearer!”