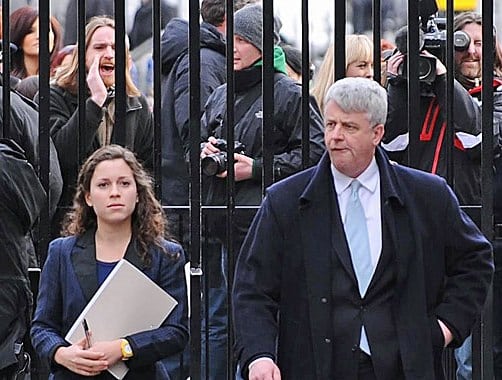 Castigated: Lansley has been repeatedly confronted by angry protesters over his controversial NHS refoms

In comedy, heckling is the preserve of those prepared to tread the fine line between bravery and stupidity. The clever catcall, timed to perfection or sharp enough to knock a seemingly infallible performer sideways, is a joy to behold. Alas, in the quick-witted, no-holds-barred world of stand-up, the heckler rarely – if ever – comes out on top. For the comedian, a heckle is the theatrical equivalent of an open goal, a golden opportunity to get a big laugh at the expense of some unthinking audience member whose crime was to assume, usually mistakenly, that they could outwit the talent on stage.

Heckling is not restricted to the dark, beer-soaked rooms of the comedy circuit, however. In the age of 24/7 news media, where every pledge and action and soundbite is microscopically scrutinised, our politicians have almost nowhere to hide from angry members of the public. Yet unlike the comedian, the politician is presented with no such golden opportunity when confronted by the scornful heckler. Whilst the clever comic has licence to eviscerate his opponent in no uncertain terms, it is clearly not politically viable for a Cabinet minister to dismiss a valuable member of the electorate with a barbed jibe or a barrage of expletives.

As such, Health Secretary and professional NHS-botherer Andrew Lansley found himself in something of a quandary when he was greeted at the tall iron gates of Downing Street by scores of furious activists recently. What had started out as a group of hecklers crying “shame!” – hardly unexpected given the controversial nature of the government’s health service reforms – became an embarrassing headline-grabber when Lansley had his path defiantly blocked by June Hautot, a ferocious former union representative. “The waiting lists are going up, so you can wait”, she explained. Lansley could not escape embarrassment; this had become a test of his ability to exercise damage limitation, and to give him his due he kept his cool. Having politely asked the septuagenarian to step aside, he eventually circumvented her as if to say “I’m a very busy man”.

Politicians do not always defuse these sticky situations with such aplomb, however. In 2006, Lansley’s predecessor Patricia Hewitt endured a torrid time at the Royal College of Nursing conference, battling almost an hour of slow handclaps, derisive laughter and jeering before abandoning her speech in an act of surrender. The incident effectively killed off Hewitt’s career as a serious political player. More recently, Gordon Brown’s harrowing experience in Rochdale, which saw him collared by “bigoted old woman” Gillian Duffy just weeks before the 2010 general election, has only served to heighten caution amongst our politicians when it comes to mixing with the public.

Such incidents have precipitated a worrying trend in Westminster. In a bid to avoid the ignominy suffered by Lansley et al, government ministers are being increasingly guarded in their encounters with the general public. At last month’s Warwick Economics Summit, David Willetts was billed to appear as a keynote speaker, only to withdraw at the very last minute. The official reason? “Unforeseen urgent parliamentary business” – and certainly nothing to do with the pasting he suffered at the hands of a group of anti-fees protestors during a lecture at Cambridge University in November. In a pathetic attempt to excuse his absence, Willetts instead submitted a two-minute video which attempted to justify his botched university reforms. He neglected to mention that just three years ago, then-Chancellor of the Exchequer Alastair Darling addressed the very same conference at the height of the banking crisis.

For all of the ridicule that David Cameron’s cringeworthy ‘Webcameron’ initiative deservedly attracted, the Prime Minister understood the importance of engaging with ‘real people’ during his time in opposition. Perhaps most notably, ‘Cameron Direct’ saw the Tory leader travel around the country to take part in a series of US-style ‘town hall meetings’. He would make a short speech outlining his core beliefs and his priorities for government, before taking questions from a receptive audience for over an hour. When we complain that politicians are out of touch and fail to understand our everyday needs and wants, all we really want is to be asked – what can your government do for you? That’s the way to do politics.

Today, too many members of Cameron’s government are content to duck and dive events such as the one at Warwick – and that is in no small part due to their fear of being publicly castigated for the policies which they espouse. But if politicians are to accept the basic tenets of accountability, they must expect to be barracked and shouted down by disgruntled members of the public from time to time – even if they don’t feel they deserve to be. The front benches thrive on confrontation when, come midday each Wednesday, Messrs Cameron and Miliband indulge in a spot of poorly-scripted blood sport. Surely, then, they can handle the occasional tête-à-tête with their electors, the lives of whom they are (at least ostensibly) trying to change for the better?

Short of vitriolic personal abuse or outright violence, we are perfectly entitled to express our views to our elected representatives forcefully and vociferously. Indeed, when executed effectively and with valid reason, heckling can be a vital tool in our democracy. As hard as they try to evade the ire of public opinion, our politicians cannot hide forever. Instead, they should embrace the disagreement, and tackle disaffection head on.