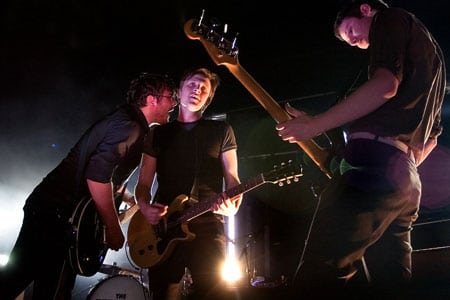 “In a moment of insanity, we decided to make this album.” That’s what vocalist Barry Hyde of The Futureheads confessed in regards to the band’s entirely a cappella release Rant on the last night of their tour at Manchester’s RNCM. After playing together for 11 years, the four-man line up decided to release the album based on their admittedly intense desire to cover Kelis’ dance hit ‘Acapella’. It was a brave move, boasting a cover of Black Eyed Peas’ ‘Meet Me Halfway’ and sea shanty ‘Hanging Johnny’. How many indie bands are recording sea shanties these days? Many critics have considered the guys’ approach a novelty and I myself wasn’t too sure it was the best move.

Then I saw their live performance. I have to say; last Friday was the best headlining set I have seen from any band in the past year. Their on-stage chat was as captivating as their harmonizing. Full of theatrics and refreshing anecdotes, The Futureheads have thrown off the necessity to fit into the indie scene, embracing whatever music speaks to them and leaving the audience in utter captivation. Familiar old favourites were played acoustically and received with warmth.

Opening act, The Cornshed Sisters as well as Manchester’s own Northern Quarter Boys Choir joined The Futureheads on stage towards the end of the set. Strings broke, guitar straps snapped, and the banjo took five minutes to tune, but it only added to the personality of the performance. Before leaving the stage, flamboyant Hyde invited the entire audience to the Prince night at The Deaf Institute afterwards to celebrate.

As an album, Rant was a ludicrous decision, but the live performance made perfect sense. I’m certain anyone lucky enough to have caught the tour will be talking about it for a long time.

The Futureheads – The Old Dun Cow