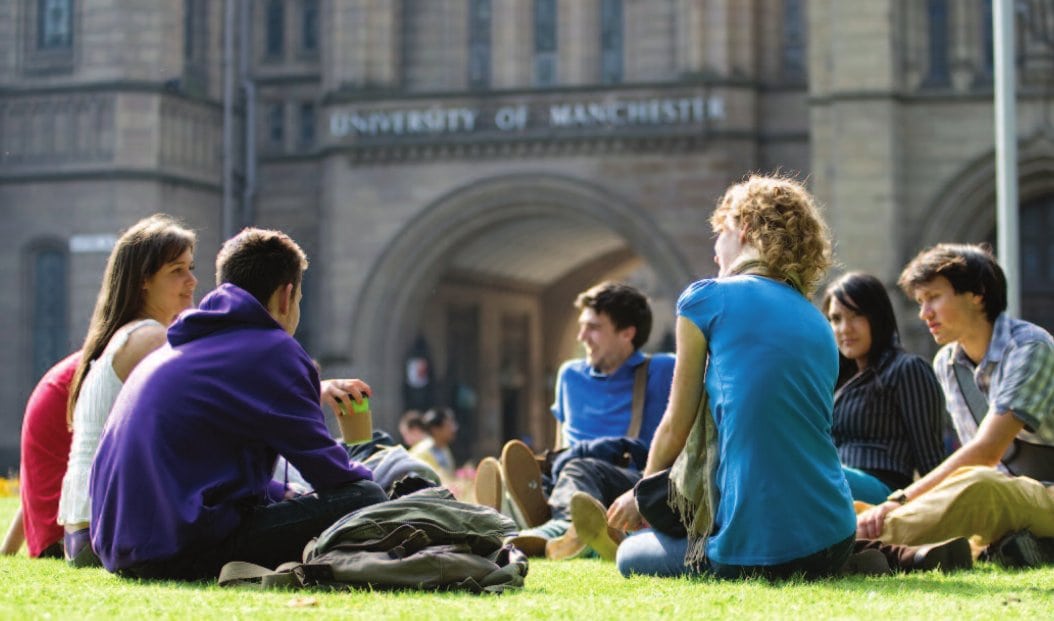 Notice how they have carefully not captured the major bus route between the grass and Whitworth hall.

The deceit of the sunny prospectus

Etched in the tomes of academic law is a passage that reads “And in the time of the great essays, arbitrary reports and exams on content that will be immediately forgotten, a curse of golden sunlight and azure skies shall smite the campus grounds. Then, the meek, the sinners and the pseudo-academics shall gaze from the darkness of their document editing prisons at the startling Eden flourishing outside and long for a merciful end to their studious penance.”

However the belief that the hat only sits on Mr. Sun’s head during days of hard studying is in direct conflict with what is written in another, perhaps more real and concrete publication: The University of Manchester Prospectus. The little purple book that brought us here, bursting with visual propaganda of young people sitting in the sunshine smiling – the smarmy slackers. Who the blazes do they think they are laying around outside? The few days of shorts weather we receive should be spent indoors revising never-ending lecture slides.

I imagine that opportunities to take these golden prospective photographs are rare. Most likely the vanguard of the university administration lurch in the spire of Whitworth tower, patiently waiting to spot a gathering of students on the only speck of green grass on campus, hastily summoning an able photographer whenever they spot next year’s front cover. The snapper is then deployed to take carefully angled, shallow-depth-of-field shots of the basking undergraduates as they pretend to look at books.

Everyone experiments with outdoor study at least once. It’s a perfectly natural thing to do, but it’s pointless. It begins with good intentions, a group of friends get out their notes on a soft patch of grass, but as soon the midday sun soaks in, the studious attentiveness wanes and someone caves in to the monotony and announces to their companions that they are bored of studying. Everyone else then agrees and work is replaced by an afternoon of nattering and ice creams.

It is up to the individual to adapt to end-second-semester life. One must become an indoors enthusiasts, a person who thrives in environments where the screen glare is minimal, the work surfaces are consistently level and the stuffy heat cooks up healthy collections of sweat in every fold of your body.

Perhaps the gods of academic life will be kind this exam season and cast a grey blanket of dank misery across the sky, making it bearable to be tucked safely inside looking up references. Although I’m almost certain it will be as always: six weeks spent enviously glaring out the window at those sods frolocking in beer gardens who have finished their one exam.

Summer is waiting at the end apparently. How wonderful. Finally one will be at liberty to sample exotic substances at relatively different geographical coordinate, serve cold meats to neurotic middle class mothers at Waitrose and hibernate in a den of video games. But if you are really lucky, you will have just finished your degree and get to look forward to compromising everything you once cared about for an income to sustain your miraculous existence as a sentient clump of atoms.