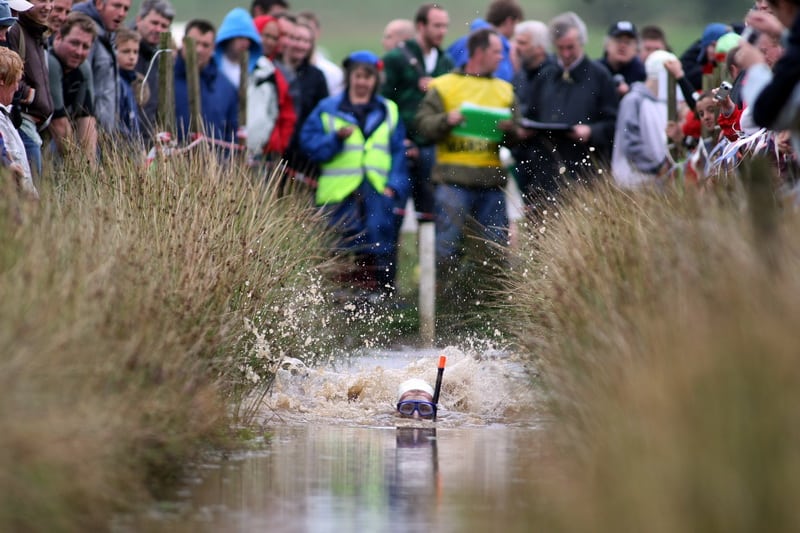 Spectators watch on as one contestant takes the plunge. Photo: Wikimedia Commons

There are many reasons why a sport might have only a small following behind it. Some ‘niche’ sports might be too physically demanding for the majority of people; others perhaps are too expensive. You get the impression, however, that the main reason why bog snorkelling has not become a pastime of the masses is that the act itself is so very unappealing.

Wikipedia characterises bog snorkelling as the completion of ‘two consecutive lengths of a water-filled trench cut through a peat bog, in the shortest time possible’. Competitors are forbidden from using traditional swimming techniques; instead, they must rely on the power generated from their flippers, with most employing a stroke akin to a doggy paddle. If the task didn’t sound sufficiently unwelcoming, bog snorkelers must also keep their mouth and nose below the murky water, hence the ‘snorkelling’ element.

The World Bog Snorkelling Championship is an annual event, taking place over the August Bank Holiday weekend in Llanwrtyd Wells, the Welsh town in which the sport was conceived. The event has taken place every year since its inauguration is 1985, save for the years 1995 and 2001, which were cancelled because of a drought and the outbreak of foot-and-mouth disease, respectively.

Refreshingly, bog snorkelling refuses to take itself too seriously, with competitors at the world championships humorously donning an array of fancy dress costumes (or lack of them), with proceeds from each year’s event donated to a selected charity.

Prospective participants may be drawn to the sport after watching YouTube videos, in which bog snorkelers can be seen laughing and frolicking joyously upon completion of the course, although this outpouring is probably more one of relief than unadulterated happiness. I know I’d be over the moon to get out of such a foul-looking trench. That is, if you could ever convince me to take the plunge in the first place.