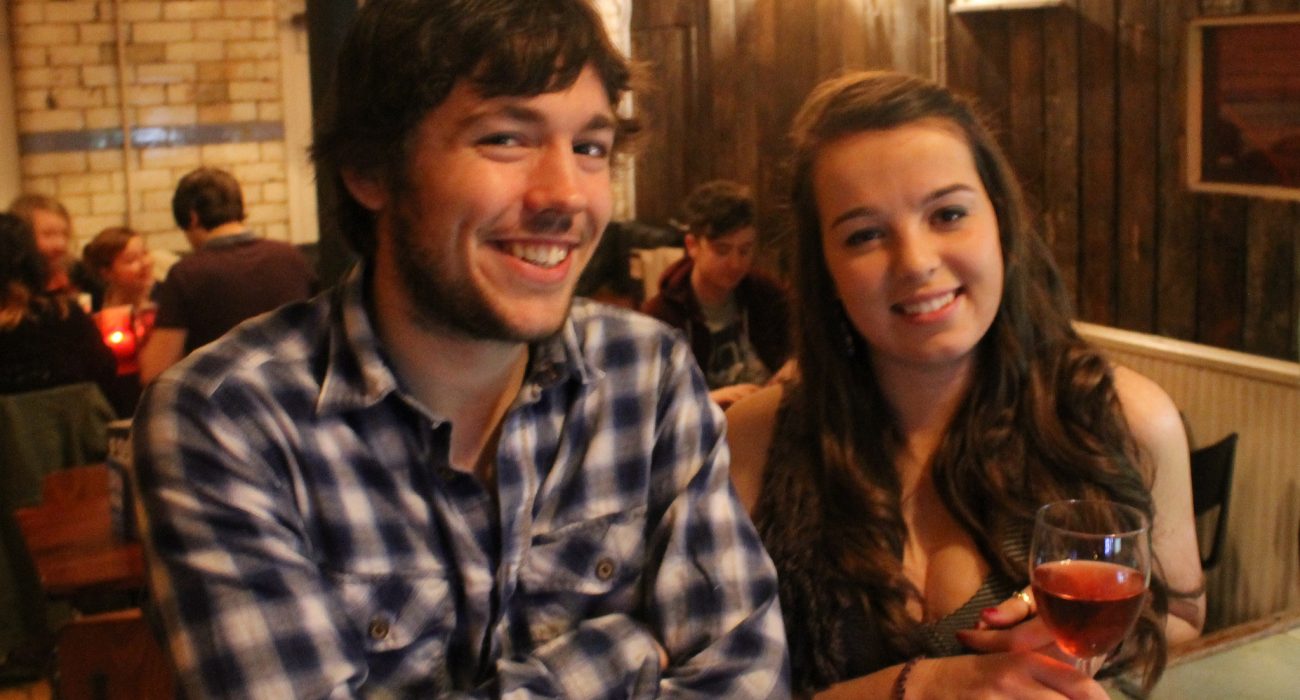 Thom and Sarah: all smiles at the start, but how was the rest of their date? Photo: Ben Bradford

So how did your date go, Sarah? Oh yeah. Surprisingly well.

What were your first impressions? Good. I liked his shirt.

A sharp dresser? Yeah I asked him about his fashion sense.

What did he say about his fashion? That he didn’t really have a style, he just kind of goes with it!

Would you have looked twice at a date on a night out and why? Possibly. I think so. He would have caught my eye. He’s quite handsome, looks a bit cheeky.

Were there any awkward moments? Not really, I’m an awkward person so I just laughed everything off.

What was the weirdest thing they told you? (Laughing) He told me he was into photography and (laughing again) that he specialised in nudity, which is quite out there.

Was he serious or joking? He seemed to have a passion for it and he did speak about it for a good few minutes. I think it was genuine, I hope so anyway.

Were they better looking than your ex? Yeah deffo.

Best feature? Probably his smile or his humour.

Why do you think he was single? Maybe the photography thing, it could freak a few girls out.

Did you swap numbers? We did!

Were your expectations met? Yes definitely.

If your date was a meal, what would he be and why? He would be a hot dog, because he was quite hot (laughs), and I like hot dogs.

With onions? Yes definitely onions, a bit of ketchup and mustard.

Cheese? Yeah he was a bit cheesy.

What drink would he be and why? A margarita because he’s tasty and has an edge to him.

Would you have looked twice at your date if you saw them on a night out? Yes.

Were there any awkward moments? Not really.

What was the weirdest thing they told you? (After a long pause) She likes plucking her eyebrows.

Is that weird? (Laughs)

What was their best feature? Good sense of humour, good menu choice, good choice of food.

And what did they choose? A tagine, it was like an apricot and squash  tagine. It was well nice.

So if your date was a meal, what would they be and why?  Good question! Probably a McDonald’s double cheese burger because it’s cheap, juicy and meaty.

At any point did you understand why they were single? No.

Were your date expectations met? Yeah. Free meal and a free drink!

Would you have still gone on a date with her if you had to pay for the meal? Yeah.

Thanks to Troff Fallowfield and all the staff, especially that nice man who made me a coffee. If you would like to appear on Blind Date, please email your name, year of study and course details to Oliver Taylor at [email protected]