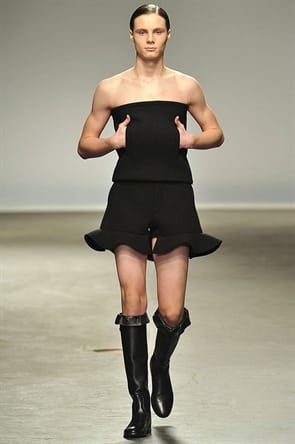 On his British Fashion Council profile, J. W. Anderson describes his design signatures as “things that can be borrowed from a man to a woman and from a woman to a man”, and this absolutely summarises his recently released AW13 men’s collection.

His male models strode down the catwalk in beautifully tailored pieces, which included frilled shorts, playsuits and feminine trench coats. Even the models’ slicked back and side-parted hair remained true to the androgynous style, as it almost resembled a women’s low ponytail from the front. The accessories were kept simple, with frill-topped equestrian leather boots and shiny white gloves. Women could definitely ‘borrow’ from this collection. I especially love the shocking cobalt blue trench, which made a beautiful contrast to the more neutral tones elsewhere and also the very eye-catchingly beautiful deconstructed tailored trousers.

With the general understanding that practically nothing seen on a catwalk is suitable or wearable for everyday life, the most amazing element of J. W. Anderson’s collection is that, for the most part, it doesn’t scream ‘man in women’s dress’. For example, the emphasis falls on the beauty of the clothes and the way they complement the models. However a poll of friends and course mates did show that not everyone shares this opinion.

His new collaboration with Topshop, released on the 15th of February, has been highly anticipated. In this collection too there there are frills and leather boots, and the hand-knit jumpers echo the simplicity of the jumpers of his menswear collection. Whilst this womenswear collection is far less outlandish than his catwalk shows, J. W. Anderson’s androgynous roots are still prevalent: I particularly like the patent leather Harrington jacket, which could definitely be borrowed as menswear. Another interesting piece is the argyle jumper, which oddly resembles a brilliant mix-match of your grandad’s golf jumper and a tasseled rug, and has sold out in almost all sizes only hours after being released online.

J. W. Anderson at Topshop is definitely a go-to for fans of the androgynous style, as the fun prints make the style easier to wear. I’ll see you in the queue!