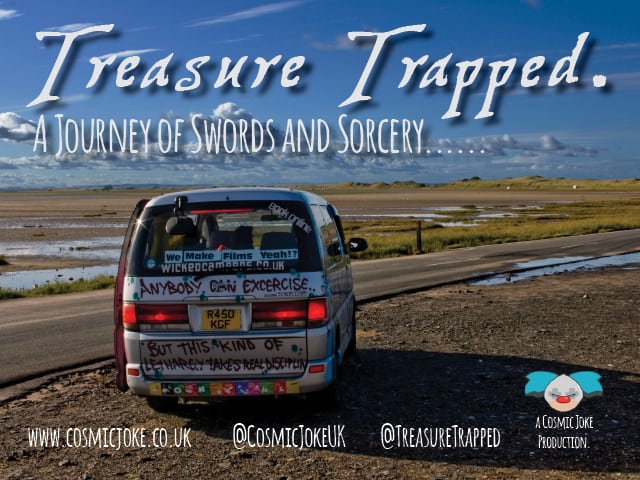 What is Treasure Trapped about?
Treasure Trapped is a road movie documentary about the LARP hobby. For those that don’t know what LARP is, it stands for ‘Live Action Role-Play’ and the easiest way to describe it is it’s like Dungeons and Dragons but instead of sitting at a table rolling dice you’re out in the woods battering each other with fake swords. Have you seen the movie Role Models? If so, you’ve seen a bit of LARP. In Treasure Trapped we’re off on a journey to find out how the hobby works, who plays it and why.
Where did the inspiration for Treasure Trapped come from?
A good few years ago a friend of mine started LARPing, as they say. When he told me about it I could not believe such a thing existed, I was instantly fascinated and wanted to know everything about it, not to mention see it in action. I figured I couldn’t be the only person who felt this way so I rallied the troops and we decided to set off to some LARP events with a camera and see what happened. Next thing you know we have a documentary on our hands.
Who was involved?
The film is produced by Cosmic Joke who are a Manchester based production company, founded by myself after leaving The University of Manchester. When I left University I felt like I hadn’t had many opportunities to develop my filmmaking skills or meet with industry professionals so I wanted to start a production company that offered Manchester students the chances I never had. As a result Cosmic Joke is made up of a mixed bag of people who’ve been working in the industry for 20 years and current University Students looking for their way into filmmaking.
What was the film-making process like? Did you encounter any difficulties?
Making the film has been an immensely enjoyable and fascinating process but not without the challenges that face any documentary film project. Dealing with ‘reality’ you need to be adaptable, some things will go well and some things won’t. We’ve captured incredible footage in the most unlikely places and similarly had monumental failures filming what we thought would be guaranteed gold. It’s also a challenge working on such a big project, we’ve been working on this for three years now, maintaining relationships along the way, it becomes a huge part of your life that you can’t switch off. Everyone is out their juggling their studies or other commitments but we’ve always managed to make it work.
How did promoting your movie on sites such as Kickstarter help?
Kickstarter has been invaluable in helping promote the film and, of course, with earning us that last little bit of funding that we needed to finish. It’s helped us reach people all over the world and build a global audience for the film when is released. It’s also helped us make contact with interested parties who would like to help with further promotion of the film or be involved in some way. Without giving too much away we received a special invite to something yesterday that we never dreamed we’d have the chance to attend with Treasure Trapped, and that was because of our Kickstarter campaign. It is a constant job to maintain this interest though. It really annoys me when people set up these Kickstarter campaigns or twitter accounts and expect them to populate themselves, after running our campaign I have more respect than ever before for those film promoters out there, especially using crowd funding.
How was Treasure Trapped received?
Treasure Trapped is still a few months away from release. All signs point to a positive reception so far though, we’ve had great feedback from all our trailers and test cuts, so fingers crossed the finished product will continue in this vein. We hope we’ve made a film that will interest and entertain people who’ve never heard of LARP before whilst pleasing those devout LARPers out there who want to see their hobby handled fairly in a film.
What projects have you got lined up next?
I keep telling myself I’m gonna have a holiday when Treasure Trapped is released but it’s already looking unlikely! We’ve got a pretty steady flow of music videos on at the moment (our bread and butter as a production company) and are developing a script into a feature film so lots planned but I’ll keep it vague and secretive for now!
How can we find out more info/get involved?
If anyone would like to know more head to www.cosmicjoke.co.uk for the lowdown. All the up to date happenings come flying out of our twitter accounts @CosmicJokeUK and @TreasureTrapped or we can be reached on [email protected] We’re currently sat inside 18 hours a day watching LARP footage so any greetings from the outside world are much appreciated!