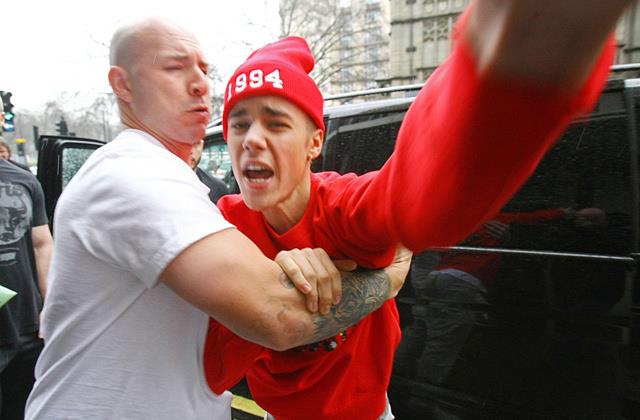 Whether you like it or not, Justin Bieber is the biggest pop star in the world. He has nearly 38 million Twitter followers, 3 billion views on Youtube and 52 million Facebook fans. He sold out Madison Square Garden in 22 minutes. He is, opinions aside, a pretty big deal. The question that has been bouncing around the Internet recently is; has all this gone to his young head? The Canadian star has always divided opinion, from his devoted army of ‘Beliebers’ to the copious amount of ‘Haters’ he has managed to accumulate. Even taking this into account, his last few months have been controversial.

His time here in the UK marked the beginning of the media storm. He turned up two hours late for one of his sold out 02 arena shows, one of the biggest shows of his record-breaking ‘Believe’ tour. He reportedly remarked backstage, when one of his entourage attempted to chide him onto the stage, ‘My Beliebers will wait for me’. If this is true, not only does he sound harrowingly like a cult leader, but also massively self-absorbed. The idea that his fans worship him so much that he can pick his own concert times is mildly terrifying. If we’re being realistic, the chances that his exact words were twisted are very high. Regardless, his tardiness cannot be overlooked. It is quite clearly a sign of someone struggling to deal with just how colossal his brand has become. Stunningly, this was not his most reported misstep on our Great Island. His uncontrolled rage directed at a photographer made many more headlines. After the aforementioned photographer had called Bieber a myriad of revolting names, the 19 year old burst of his people carrier to declare that he was going to ‘ f*cking beat the f*ck out of’ the paparazzi. In fairness, the names being thrown at him were enough to make anyone’s blood boil, but should he not have learnt to control himself by now? He has had this level of attention for over three years. This, coupled with the fact that the likelihood of him being able to ‘beat the f*ck out of’ the huge bald photographer was very slim, makes his reaction seem overcooked and impudent. His sea of bodyguards prevented him from getting anywhere near the object of his desire, but many would have silently thought ‘ Go on, Justin. Let’s see where this gets you’.

His antics did not limit themselves to the UK. Last month, his actions wreaked havoc in Amsterdam. Like many tourists, he decided to pay a visit to the Anne Frank museum, situated in the alcove in which she and her family hid from the Nazis until their eventual capture. I myself have been there and it is a hugely affecting experience. On his way out, young Mr Bieber decided to write in the guestbook. He scribed ‘ Truly inspiring to be able to come here. Anne was a great girl. Hopefully she would have been a belieber’. Although undoubtedly well meaning, the ‘Boyfriend’ singer grossly misread the situation. The museum is a place of such gravity for so many, that to mention himself and his followers in his reflection comes across as shockingly arrogant. There is no doubt his comment was innocent, but it was undeniably inappropriate.

Despite the young singer’s behaviour, I feel he needs to be cut some slack. I would defy anyone not to become slightly self-absorbed when you have 50 million fans that devote their lives to you. He receives tweets on a daily basis containing such charming ditties as ‘ I would be nothing without you’ or ‘you are my reason to live’. Although terrifying, this has no doubt had an effect on him. His day to day friends consist of bodyguards, a vocal coach, a manager and many other non-descript helpers who are paid to be with him. He has no idea of what a normal childhood is like. He is 19, with an estimated personal fortune of 120 million dollars. When he was caught on camera supposedly smoking marijuana, his fans started trending the twitter topic ‘ #cutforBieber ‘ in an attempt to stop him doing drugs. Is experimenting with drugs not normal teenage behaviour? Although his recent actions have been misjudged, I for one feel desperately sorry for him. No one can understand what his life is like and I see him as a teenager dangerously out of his depth.

Written by Will Lynn

Tags: Justin Bieber, off his rocker, off the rails