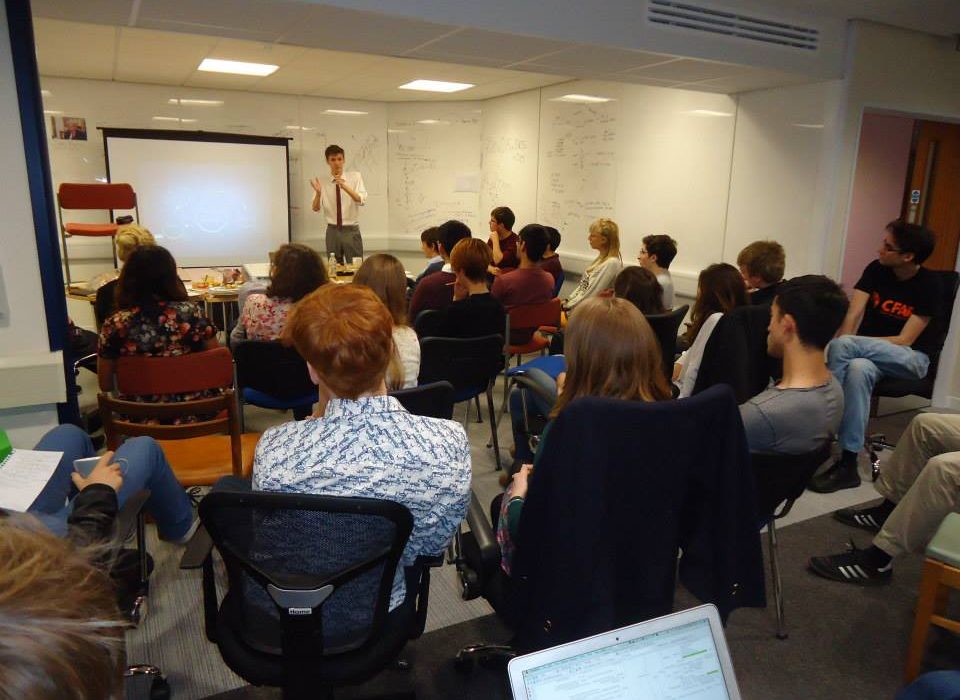 Interns receive a lecture at the Centre for Effective Altruism. PHOTO: Giving What We Can

At face value, the question seems ridiculous. Yet, it is just one of many controversial questions being asked at The Centre for Effective Altruism (CEA) and its answer may surprise you.

80,000 Hours is a careers advice service with a difference. Working within the CEA they work to discover the most ethical way you can spend your 80,000 working hours.

When we think of words to describe bankers ‘ethical’ is not likely to be at the top of our list. With their reputation for greed, recklessness and the pursuit of self-interest at the expense of society, ‘ethical’ is probably the last word we would use. But for students wanting to help the world’s poorest, 80,000 Hours suggests the high-flying world of finance might just provide their best opportunity.

Research carried out by charity evaluator GiveWell suggests we can save a life for as little as £1500 by donating to the Against Malaria Foundation. Investment bankers can relatively confidently expect to earn somewhere in the range of £8m to £40m over the course of their career.

Giving What We Can, part of the CEA, encourages students to pledge 10 per cent of their income to charity, but some go further. The Further Pledge asks you to give all of your income over a certain level to charity.

£50,000 a year is a comfortable salary, more than twice than the median income – over a lifetime that works out as a lifetime earnings of £2m.

If we assume that our prospective banker is nothing special and put their earnings at the lower end of the pay scale. We are still left with £6m worth of malaria nets to be handed out.

In other words, over her entire career our banker can earn enough to save 4000 lives. Even if our banker cut the amount she gave a year by £50,000 she will still have given enough to save over 2500 lives. Keep in mind these are conservative estimates, many investment bankers can earn significantly more and save many more lives.

When 80,000 Hours co-founder William MacAskill came forward with the case for earning to give in 2011 it shocked many. With public opinion firmly against banking it seemed a bizarre time to come forward advocating the profession. Was it a publicity stunt, an attempt to rehabilitate banking’s tarnished brand or was MacAskill just being contrarian?

When I spoke to 80,000 Hours researcher Thomas Hendry, he made a nuanced case for earning to give.

“We got a lot of publicity for earning to give, we think that often this can be a very good option over the non-profit sector. But that’s not the only option we consider. For example, the people working at 80,000 Hours aren’t earning to give.”

Guiding every decision at the CEA is the question ‘which action will have the greatest impact at reducing poverty?’ For people like 80,000 Hours founder William MacAskill and Giving What We Can Executive Director Michelle Hutchinson its public advocacy and groundbreaking research.

Replaceability is vital when considering whether earning to give is the right option for you.

For example, training to become a Doctor may mean that you save lives on a daily basis, but jobs in medicine are highly competitive. If you choose not to train as a doctor, the place you free up will be filled immediately by someone as equally qualified as you. The direct impact of becoming a doctor on saving lives is marginal.

“If you take a job at a non-profit, you may be making less of an impact than you think. If this were a competitive job, then you may not be as productive as hoped.”

Replaceability also casts doubt on the idea that many high-earning careers cause more harm than good.  Wall Street trader Brooke Allen responded to MacAskill arguing that there was no amount of money a securities trader could give to make up for the harm caused by the collapse of the mortgage industry.

Investment banking jobs are some of the most competitive jobs out there. If you reject the profession for ethical reasons, another person will take the job instead. The only difference is that now none of the money is going to alleviate extreme poverty and the person taking the role will likely be less inclined to think ethically.

Ethics still remain an issue, but the benefits of earning to give dwarfs the harms of working in an ethically dubious industry such as high finance. In a recent blog post 80,000 Hours estimated for the harms to outweigh the benefits of a Goldman Sachs employee giving half their earnings to highly effective charities, Goldman Sachs would have to be responsible for five per cent of all deaths in the world. Keep in mind that Goldman Sachs represents just three per cent of America’s financial industry.

80,000 Hours’ ideas are not just amusing thought experiments. The arguments they make have persuaded people to put their ideas into practice. One example is Jason Twigg, an MIT Computer Science graduate who chose to write software for a high frequency trading firm. Despite having the potential to be a successful academic, working in finance provides him with the greatest opportunity to save lives.

Most students and academics tend to have strong opinions on what constitutes fairness in society and the need to alleviate extreme poverty in the developing world. Yet when push comes to shove, very few actually follow through with what their ideas demand. We are left asking the question first posed by Marxist philosopher Gerry Cohen – “If you’re an egalitarian, how come you’re so rich?”

You cannot make the same charge against 80,000 Hours and Giving What We Can. Translating theory to real quantifiable action runs through everything they do. Giving What We Can Executive Director Michelle Hutchinson commented on the organisations origin.

“Toby Ord is a philosopher who always thought we ought to help people much less fortunate than ourselves – that we should take our duty to help much more seriously. His friend said ‘If you really believe that why aren’t you giving your money away?’”

This along with the problem of working out how best to help those in need lead to Ord founding Giving What We Can.

Peter Singer – the philosopher who inspired the work of CEA – is the perfect example of someone who puts theory into practice.

After arguing that failing to give to those in extreme poverty was tantamount to refusing to rescue a drowning child because you did not want to be late for work – Singer has given 25 per cent of his income to Oxfam.

Singer’s analogy between failing to save a drowning child and not giving to charity may seem shocking. Yet, the principle Singer establishes is that when we can reduce large amounts of suffering with little cost to ourselves is hard to argue with.

Giving 10 per cent of your income to charity may seem a lot, but Giving What We Can point out earning the median UK wage puts you in the richest five per cent globally.

Part of the reason Giving What We Can primarily talks to students is that most students are used to living on a modest income. Hutchinson points out that you can pledge to give 10 per cent of your future income.

“We have a lot of people who join as students. Students typically live on a very small income and they are very happy, they don’t mind not going to fancy restaurants all the time. If someone thinks about it as a student, they realise that even if they are not going to be earning massively more in the future, they will still be richer in the future and can make plans to live on 90 per cent of that income.”

She concedes it will be more difficult for people who already have financial commitments.

Giving What We Can stresses the importance of not just giving but giving effectively. They evaluate charities on how well they can help people in the developing world. Rather than focusing on individual charities, they look at research into healthcare to find the most cost effective interventions.

Some interventions can be one thousand times more effective than others. Giving What We Can focuses on two – stopping neglected tropical diseases and preventing malaria.

“We try to find charities that implement those particular interventions – at that point we go into the charity asking questions such as; … Are they implementing the intervention in the way the World Health Organisation recommends? What is the charity’s budget like? Can it absorb more funds?“

When discussing charities at Giving What We Can, with all the numbers flying around its easy to forget the solutions being proposed will help real people, a problem Hutchinson is all too aware of.

“There has been a lot of psychological research showing that reminding people of numbers and reminding people about money in terms of costing less and costing more immediately takes people out of the altruistic part of the thinking process.

“We try reminding people that there are actual real people in these equations, what it actually means for a charity to be 100 times more effective than another, that means you can save 100 lives where you would have only saved one. Each of those lives is worth just as much as the one. They each have their own families, their own plans and hopes.”

Giving What We Can’s research shows that we have the potential to do a lot more good than we would have otherwise suspected.

“Before I joined Giving What We Can I had no idea just how effective some of these treatments are, 50 cents for a tablet of Albendazole allows you to treat someone for four different prevalent intestinal worms. It’s really impressive, almost unbelievable for that little money to be able to help so much.

“Therefore, if I give a substantial part of my income, I could help a lot of people.”

One difficulty with getting people to focus on the most effective charities is that they tend to focus their donations locally.

“Charities who work in our local communities tend to be less effective than ones that work in the developing world because we are lucky enough to have the NHS and a government social security system that means that if a problem is fairly easy to solve and fairly cheap to solve, it plausibly already has. While there are people around us who do need help, it tends to be the case that it is very difficult to help them.”

Throughout both 80,000 Hours and Giving What We Can is a healthy optimism about our potential to solve extreme poverty and a willingness to put ideas into action. By backing up noble sentiment with rational calculation they are able to have a huge impact and should act as an inspiration to us all.