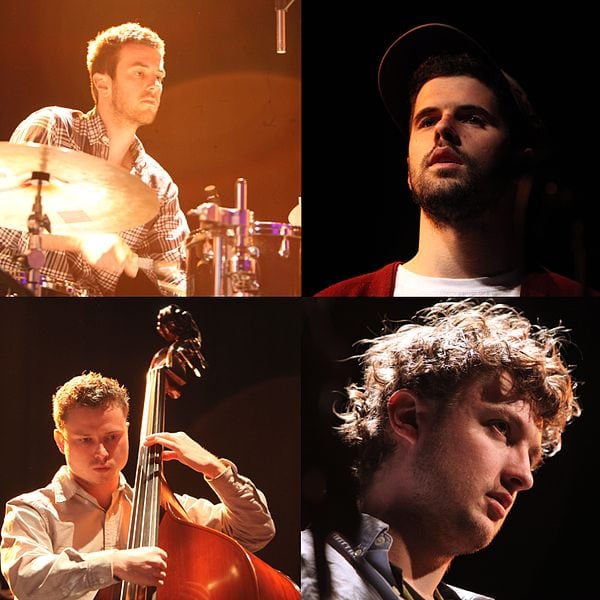 Mercury award nominees Portico Quartet have been bridging the gap between Jazz and Dance music since 2007. Having cut their teeth busking on the South Bank, they’ve broken onto the electronic music scene this summer with appearances at Dimensions and Outlook festivals in Croatia.

For a band that started out as acoustic buskers, playing big festivals where the crowd expects ground-shaking volume can present a challenge: “We’ve had to beef up our sound a lot. The acoustic instruments started to sound muddy on bigger sound systems so we’ve had to bring in more sub-bass frequencies and electronic drum sounds. The live set’s changed a lot, it’s very different to the album.” They have not spent their whole summer “beefing up their sound” for festivals however. Apart from Green Man, Wilderness and the Croatian festivals (Wyllie described the set they played for the Dimensions opening concert in the old Roman Amphitheatre as “magical” and as the “highlight of the summer”) the band has “mostly been concentrating on writing for [their] new album”.

Playing ‘electronic music’ focused festivals such as Outlook and Dimensions suggests Portico Quartet may be changing their approach but Wyllie insists that they “don’t think of it as ‘electronic music’; it’s certainly not produced in an electronic style. Myself and Duncan have been getting more into electronic music recently, and we find ourselves spending more and more time hunched in front of computers trying to get the ‘right’ sounds.”

On their new album they work with Swedish singer Cornelia, who’s recently collaborated with Bonobo and Henry Saiz. Her emotive and girlish voice gives the formerly instrumental quartet a new dimension, and her philosophical lyrics are an excellent marriage to the band’s new, more serious sound. For Wyllie, it “all just came together really quickly” with Cornelia “replacing the sax as the ‘voice’ in our music”. This frees up Wyllie to play more keyboards, and shifts things away from acoustic ambience to minimal electronica. Wyllie lets on that they’ve got more stuff with Cornelia in the pipeline, and she’ll be featuring in a few tracks on their next album, out some time in 2014. She’ll also be at their Manchester gig, not to be missed!

The conversation veers away from the current Portico Quartet arrangements and towards their musical heritage. Nick Mulvey and Jack Wyllie met at university and shared a love of American minimalist composers such as Steve Reich and Phillip Glass. This influence can be heard in the hypnotic rhythms and gradual metamorphosis in the music. Milo Fitzpatrick and Jack are both into their Jazz while
Nick was big on World music, particularly from Africa.

When I ask about the band’s signature instrument – the hang – Jack reveals that while there are many things they love about it, “there’s just something ancient and strange about it, a sound that you can’t quite put your finger on… It’s kind of like an Indonesian Gamelan or Caribbean Steel drum, and it’s very versatile” and can acknowledge it has given them a strong identity, they are actually “phasing it out”, no longer happy being “that hang band…’’.

Well, with or without the hang, we hope that Portico Quartet will carry on making their signature brand of minimal acoust-electronica. If you feel like kicking back to something hypnotic and truly unique on a Sunday evening then don’t miss them at their Manchester gig at Gorilla on the 27th!