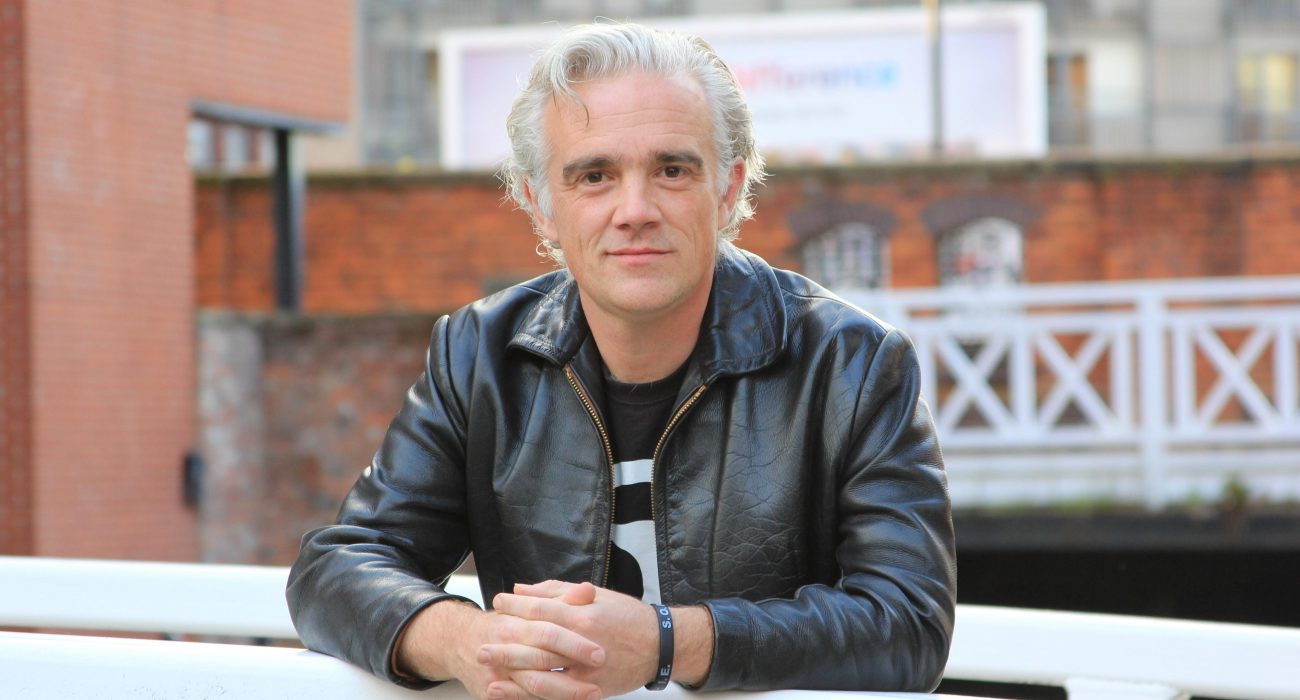 Hi Loz, now it seems like the Pirate Party biggest issues would be national but you actually do a lot of local campaigning right?

I think one of the things we found as a movement that started focused on the Internet, is when you start to engage politically, there are whole ranges of things that need fixing.  We’re learning the best of the approaches from the way the Internet functions, the way ideas filter up from crowds and people rather than being imposed from the top.

What are the main reasons to be concerned about surveillance?

Let’s remember the extraordinary extents of mass surveillance that has been revealed by Edward Snowden.  He called it the largest ever non-targeted surveillance in history. It’s truly staggering.  We’ve seen into the programmes by the NSA and GCHQ who are doing blanket targeting of emails, web visit use, phone calls, photographs, and videos.

In 2012, GCHQ handled something like six-hundred million phone call events – as they call them – just through the fibre optic surveillance program.  Perhaps not many people think they’re likely to be picked up and taken off to Guantanamo Bay, but we need to remember that we were promised by this government, and specifically by Nick Clegg, that we would not be subject to blanket surveillance and the so called Snooper’s Charter. We now know that we’ve been misled.

It is important because it’s an attitude of the government and the surveillance communities towards us.  It turns us all from citizens into suspects and is all about how information gets connected up together.  We’ve already seen there are attempts to infiltrate and target people based on their beliefs.  It has a really chilling effect on the desire of people to get involved in politics, when at the same time politicians are bemoaning the lack of democratic participation.

It’s about how we can all be targeted simply because what we do sends up certain flags.

What software are we able to use to protect ourselves?

There are two things we should be doing: one, there is no excuse not to start to protect your own communications, especially if you’re interested in politics in any way. You should consider encrypting your email.  People are holding “crypto parties” now to share information about how to protect your communication.

You can also download an app called RedPhone that can protect your phone calls.

I’m not so paranoid to think that anyone is out to get me but it’s just basic common sense.

The other thing we should be doing is putting political pressure on.  Cameron has claimed that Snowden’s revelations haven’t made that much of any impact in the United Kingdom but 60,000 people have signed a Pirate Party petition for a full and proper inquiry into Prism and protection of whistle blowers.

Just because our politicians failed to hold the security services to account, doesn’t mean those of us outside of the Westminster bubble aren’t interested, but you have to let your MP know you’re concerned about these issues because one of the things they love to say is that that nobody cares and no one contacted us.

Would you say this is not considered an issue by the major parties?

It’s considered an issue in the wrong way.  Particularly for the Conservative and Labour parties who haven’t missed any opportunities to push for further blanket surveillance.

I thought it was disgraceful that in the wake of the Woolwich attack that previous home secretaries were pushing for the communications database, the snoopers charter, which was a cynical and frankly vile response to an individual tragedy.

We’re not saying there shouldn’t be intelligence gathering but it’s about being specific and targeted.

The problem has been that the Conservatives and Labour want to outdo themselves as being seen to be tough on crime and tough on terrorism without looking at what is the right thing to do.

Many of the Liberal Democrats activists care about these issues, though what we found, as with the NHS and tuition fees, is that they’re unable to act and this is another area where they have directly let us down.

We’ve said all along that there is not a major crisis in the music and film industries.  There have been problems with the content providing industry has been way, way too slow to provide reasonable useful alternatives that really benefit artists and take advantages of the new digital sphere.

In Sweden we can see that last year music revenues have gone up and that is largely due to streaming income, even though it has been seen as the home of piracy because it’s the originator of The Pirate Bay.  Sweden has a thriving digital economy that you can contrast with the United States, where digital revenues continue to fall.

The average consumer spends £16 every 3 months on digital content.  So-called pirates spend on average £26 pounds every three months.  That’s not from the bureau of pirate statistics, that’s from OFCOM.

When you’re able to have a thriving digital economy that also allows for the sharing of products that people have done since the first wax cylinder came out then that’s what benefits artists.

As for site blocking, censorship is not an instrument of culture policy.  It never will be.

The plan for piracy was that your downloading would be sniffed on and you would be sent letters, and your household internet connection would be downgraded in a collective punishment, though no one wants to send out these letters this side of a general election.

Do you think that a very small party can have a big influence?

Yes, absolutely.  It’s about being able to show that you’re serious and you have something to contribute on key issues.  It’s about what approach you take.

Why already in Manchester we’ve beat the various left wing parties is because that we’re not content to go out and demonstrate and shout a lot.  You also need to be engaged and showing positive alternatives.

We’re in a very different political situation now.  We’re no longer in a two party system, or three, or even four, it’s much more interesting and I’m glad for that.

Bitcoin is interesting because it has shown there is more than one way to run an economy.  Yes, it’s incredibly volatile and it’s a new territory, but it has huge potential in terms of economic growth and boosting smaller businesses.

There have been lots of scare stories about Bitcoin and what it’s been used for, that it’s not traceable, and it’s involved in paying for drugs, but you can say that about money (laughs) so that’s no different.

What’s your take on the trans-Pacific partnership?

Right now we’re seeing a slew of international treaty agreements that are once again being negotiated behind closed doors.  For all the European Unionists claiming that its involving people it essentially being agreed without our say so.

This approach has to stop.  That is one of the key things we will be pushing for, that we are planning to field candidates in the EU elections.

We need real engagement, and real inquiries.  The biggest problem is that it has the potential to undermine workers rights, protection for the environment, and data protection.  It’s really vital that we have voices in the EU parliament opposing that.

The biggest problem is that corporate entities can get to write our laws, not people and our elected representatives, and that’s something we’ll be fighting every inch of the way.

We said that as soon as governments and courts took powers themselves for filtering or blocking for the purposes of copyright that that would start to spread, and we’ve been proved right.

The government and the tabloid press have pressured the largest internet providers into a blanket filtering system that you need to opt out of rather than opt in.

We’ve seen how rape crisis centres have been blocked by these filters, how they have blocked access to LGBTQ information.

There’s a lot of Internet policy but what is the Pirate Party engaged with in Manchester?

Right now, some of the biggest issues we’re looking at are about how people in Manchester get real power over the environment around them and also what the council is doing day to day.

The council continues to blatantly ignore guidelines about transparency and citizen participation, so in the planning meetings, for example, the chair is still telling people not to use their phones to video or to tweet.  This is completely against all the guidelines now.

Planning meetings aren’t the most thrilling things in the world but they are they are absolutely vital about every aspect that we see about us in this city.

We’re pushing hard about the environment in Manchester.  With the piecemeal privatisation of space, the city is being eaten by zombie carparks.  We coined that, as the city is starting to look like the set for a disaster movie.  That space that the residents want to make into green space and park space is being taken over, without planning permission, by car parking companies that bleed money out of the economy and damage the environment, and discourage positive transport like cycling and walking within Manchester.

If the Pirate Party were elected to government, what would the first Queen’s Speech be?

I would hope that any Pirate administration would be a broad coalition that would be looking at bringing a range of people with a range of views in.

We would be looking to bring in a bill of digital rights, and ending age discrimination in the benefits system and the wage system against young people.  Getting rid of tuition fees, and boosting libraries by taking experiences from hackerspaces.

Looking at alternatives to nuclear weapons, and boosting the economy by focussing on small businesses and peer to peer; that we would be protecting whistle blowers, that the attacks on civil liberties that have gone through successive governments would be ended, that we would be rolling back the worst legislation that have come from them.

Most importantly that it would be about a completely different approach to politics: that it would done with people and not to people.