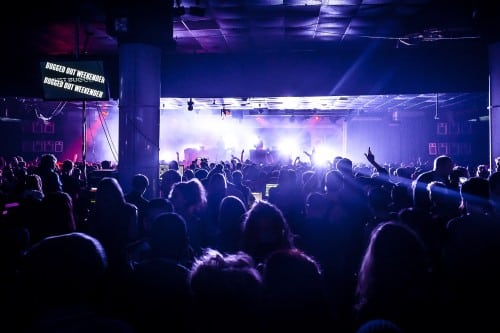 Bugged Out returned to their spiritual home in the north of England in the glamorous setting of Pontins for the third Bugged Out Weekender, marking their 20th Anniversary. The experience they have in throwing parties was telling and all aspects of the festival from production to pricing were first-rate. The sound was phenomenal (dare I say Room 2 was maybe too loud), the light shows were dazzling and a pint was £2.20 (unheard of in my previous festival experiences, try triple that). So all the logistics were in place for the basis of a great festival, but what about the most important part – the music.

Friday night saw Todd Terje performing his live show in the UK for the very first time, and it was a real treat – coupling his impressive catalogue of tracks with dextrous musicianship in a set that was mellifluous, but exceptionally danceable. Later that night Dixon picked up this baton with a typically outstanding set, marked by soaring euphoria underlined with thumping bass lines.

Saturday began for me with Ten Walls, producer of two of the biggest tracks of 2013 in ‘Gotham’ and ‘Requiem’. These proved highlights, yet the whole set was of a high standard and really underlined the impressive collection of tracks Mario Basanov has created in his short time working under this alias. Away from Room 1, Heidi’s Jackathon was in full swing in Room 2 with Kerri Chandler dropping a string of classics such as ‘Love Changes’ and ‘I Want Your Love’. Next up in a rammed Room 3 was garage legend DJ EZ, his all killer no filler style causing mayhem in the sweat pit it became. Jackmaster appropriately keeps thing jackin’ in the Jackathon room with a fine selection of house and techno, eventually closing on Lovebirds’s  anthem ‘Want You In My Soul’. Sasha keeps Room 1 going right until 7am in the main room, most notably drawing for both sides of Ậme’s latest Innervisions release ‘Tatischeff / Den Råtta’.

The final day begins disappointingly with the lack of Skream at ‘Skream’s Pool Party’. He makes full amends later though with his four hour b2b with Eats Everything, they are in full party mode throughout dropping the likes of ‘Move Your Body’ by Xpansions and ‘LFO (The Leeds Warehouse Mix)’. Carl Craig steals the show tonight however, with a relentless set of percussion heavy techno; the drums provoke everyone into fist-pumping dancing. Seth Troxler calms things down and closes the festival with a set displaying his signature minimal tech-house sound.

The clear effort Bugged Out! make to prioritise the enjoyment of the crowd over self-interest really adds to the weekend. Certainly an event worthy of marking the 20th Anniversary of such an important dance music brand.