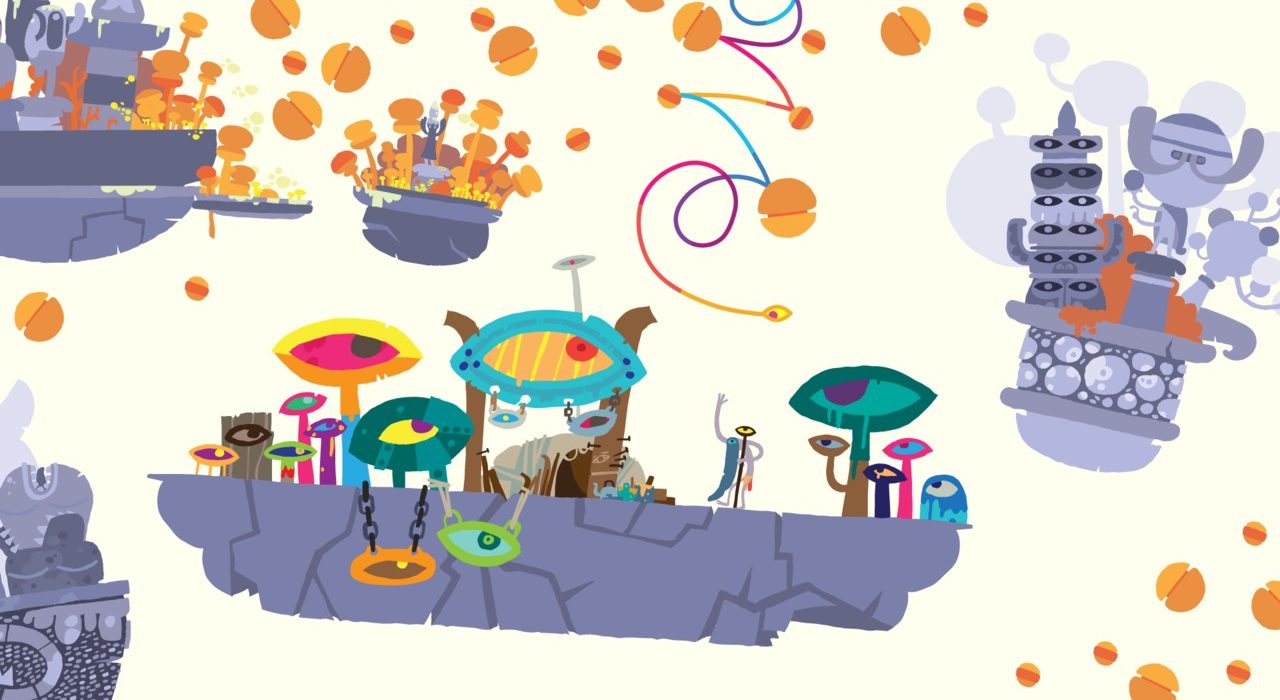 Hohokum is a 2D exploration game which puts you in control of a psychedelic sperm that harbours visions of cosmic worlds and alien monkey playmates, allowing you to meander playfully through a timeless and effulgent dimension presided over by nothing. Ostensibly an arty-farty indie offering with plinky-plonky music, the designers at Honeyslug have nevertheless managed to distinguish their game by keeping their noses out of the player’s business; no context is given in the opening, no instructions are plastered over the screen to tell you what to do and there are no voice-overs to guide you through the experience. Instead, you spawn in an abstract level hub and travel through portals into mystical environments, interacting with background scenery, oddball characters and various little mechanisms and contraptions as you go with no overruling objective in mind. The game employs a free-form, experimental structure, from the very fluidity of the spermy snake’s movement (imagine Snake but without the dodgems-esque rigidity) right down to the level design which encourages self-governed exploration and trial and error.

The game gleefully trades in minimalism and catharsis, qualities which won’t appeal to all gamers in equal measures. Those looking for a puzzle-driven adventure replete with intricate platforming elements and a twee plot will come away from Hohokum in a bewildered grump. If, however, you’re of an altogether calmer disposition and you can entertain the idea of a game whereby the very act of playing is considered an object in and of itself, then this might just interest you. There’s no denying the marriage between soundtrack and art style is spot on here. The simple and cutesy character sprites are complemented perfectly by jingling bells and chirrupy whistles, and what’s more the music functions dynamically in tandem with the player’s actions, acting as a feedback mechanism whilst layering on the dreamy vibes. Occasionally you will marvel at the overall effect the game produces when firing on all cylinders, spitting out vibrant explosions and pulsating rhythms as you glide from foreground and background.

Unfortunately for Hohokum the effect does wear off. Level progression becomes tedious when the next environmental trigger cannot be located, and this is bound to happen a handful of times in a single play through because the player cannot always rely on their logic alone to reach the next cue, with some puzzles bordering on the opaque. Sometimes the player must exhaust the entire layout of a level in the hope of connecting with the next vital switch or character, and if this takes more than five minutes or so, the magical spell is broken. I also wish to warn you if your parents supervise your playtime. My Dad walked in on me when I sat down to play the game in the living room. Being an ex-gamer who only deigns to enjoy the hobby when slipping into a Tomb Raider-fuelled relapse, he observed me colouring in circles with the pink snake as if I was a peasant chewing at a pair of genital buboes. It was much worse than cast-iron scepticism—it was sheer disgust. Unless you have artistically-minded parents who are capable of suppressing their reactions, make sure you play Hohokum in private, for if they catch you in the act, they’ll take the mick and get you on the defensive. But far more unbearable is the niggling feeling that they might just have a point.

Hohokum is now available for download on PS3, PS4 and PS Vita.