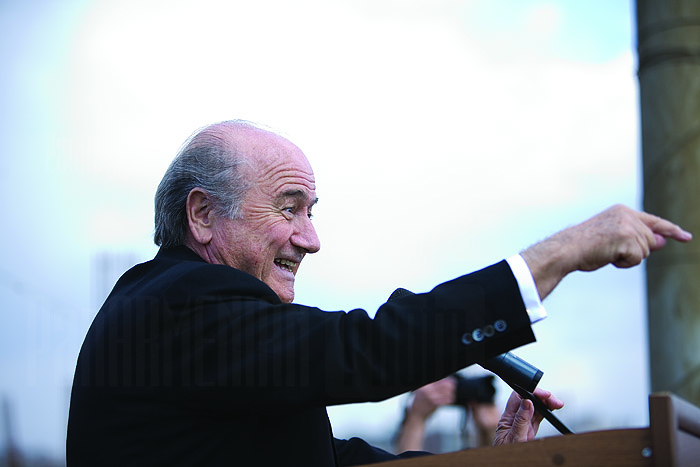 Prior to his re-election in 2011, in the wake of corruption and sleaze scandals, Fifa president Sepp Blatter pledged that this, his fourth term in office, would be his last.

However, during this month’s Soccerex conference held in Manchester, Blatter announced his intention to stand for a fifth consecutive term in 2015. What is most extraordinary about this is that he is a shoo-in to win.

During his time in office, Blatter has handed the 2022 World Cup to the awfully unsuitable Qatar; claimed that more people would watch women’s football if players wore “tighter shorts and low cut shirts”; and suggested that gay fans travelling to Qatar “refrain from any sexual activities.”

Despite this track record, which would make even the most farcical leader blush, there are no major candidates lining up to succeed Blatter as the head of world football’s governing body. The only contender to put himself forward is Frenchman Jerome Champagne.

The ethical record of Fifa under Blatter has continued its fine form recently, as last week it emerged that the Brazilian FA had given out gift watches worth £16400 to senior Fifa officials as well as representatives from the national associations of the 32 teams at this summer’s World Cup.

Fifa’s ethics committee has demanded that the Parmigiani watches be returned, including one given to FA Chairman Greg Dyke, by 24 October as the value of the watches breached its rules on gifts. This demand came four months after the watches were given out, and has only happened since a leading British newspaper broke the story.

What is astonishing is the fact that Fifa secretary general, Jerome Valcke, had wanted to give an additional two watches from a sponsor to every member of the Executive Committee of the governing body. The ethics committee prevented this from happening, but the fact that such a prominent figure seemed so completely unaware of Fifa’s own ethics guidelines underlines what a crooked and out-of-touch organisation it is.

It is this sort of endemic corruption prevalent at Fifa that has eroded the legitimacy and esteem in which it is held. Unfortunately, unless Blatter somehow loses next year’s presidential election, more of the same is sure to follow for the next four years.

In a demonstration that Fifa is not a totally rotten organisation, Executive Committee member Theo Zwanziger claimed that the World Cup “will not take place in Qatar.” The German cited the 50-degree summertime temperatures in the Gulf state as the reason why it is not feasible to host a major sporting event there, endangering the health of players and fans alike.

This is something that was widely known throughout the bidding process though, and should have been taken into account when deciding on the bids for the 2022 tournament.

Other members of the ExCo have subsequently stated that Zwanziger was merely expressing a “personal opinion”, and that Qatar will not be stripped of hosting rights. This is despite 1200 workers losing their lives in some of the worst working conditions in the world.

Despite Zwanziger’s musing, it is unlikely that Qatar will be stripped of the World Cup at this point, as he appears a lone critical voice in the committee of 24. The corruption allegations levelled by the English and Australian bid teams would be the only way to prevent Qatar hosting in 2022, but even this appears doubtful.

American lawyer Michael Garcia has concluded his report into the 2018 and 2022 bidding processes, but no names will be named and the findings of his 200000 page report will not be made public.