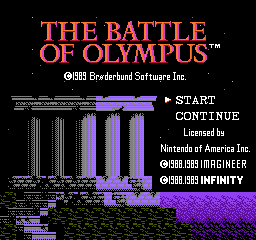 The Battle of Olympus: Emphasis on ‘Battle’

Released in 1988, The Battle of Olympus is a fairly unknown Japanese side-scroller made in a very similar style to Zelda II: The Adventure of Link, but without the over world segments. Also, like Zelda II, the game is very hard. It is much harder, in fact, and is a real test of the player’s skills and memory. You might be asking what I mean by a test of ‘memory’ and rightly so. The game does use passwords over saves but that’s not what I mean—The Battle of Olympus is a game full of trial and error.

The plot of this game is a retelling of the Orpheus myth whereupon he enters the underworld to ask Hades for his wife back. However there is a lot of creative licensing given in this game and so it is more a retelling of various myths, with Orpheus taking the place of the usual Greek hero. In this game Hades has kidnapped Orpheus’ girlfriend, Helene, and Orpheus must travel over Greece and find the three fragments of love that will help him get into the underworld to save her. However, like most games of this era, the plot is not laid out for you and instead you are thrown into the deep end and must figure your own way through the maze that is Greece.

Like I said earlier, this game will test your memory skills and I hope you have a pen and paper ready because back-tracking and item collecting are key in this game. Orpheus starts off fairly weak with barely any jump ability, but as the game goes on you will get various items like the sandals of Hermes that help you jump higher and walk on the ceiling. He also gains the shield of Athena which allows you to block (essential!) and the bracelet of Power that doubles your attack. Some of these abilities are essential but they require you to back-track to a specific god only after you have solved a particular challenge, but very rarely does the game tell you when you can go back, it’s up to you to remember.

The graphics and music for this game are very reminiscent of Zelda II. The styles of the characters are very Zelda II-like and Orpheus’ basic idle pose is near identical to Link’s. The landscapes are also quite varied with Tartarus and Phthia really standing out. The game does sometimes have a colour problem though. Backgrounds can be bright pink and are really off-putting or platforms can blend into the background and sometimes make it hard to tell what you can walk on and what you cannot. And sometimes the layout and town are presented weirdly (looking at you, Athens). The music in this game, however, is top-notch with each area having its own unique track and some of them being really catchy.

The game also has the horrible gaming sin of grinding. This is common in an old RPG but rarely in a platformer. The problem is you need olives (little orbs that you get from killing enemies) to buy certain items and you need a lot. This would be fine if you had been collecting throughout the game because a lot of the purchasing happens later. However, if you die you have three choices: quit the game, start again from that screen but lose half of your olives or go all the way back to the last temple you visited. This makes remembering and revisiting temples essential (it is also where you get the passwords) but this can also take you half-way across Greece and you have a very slow walk back. An infamous grinding section in this game involves getting salamander skins early in the game however it is a rare drop, you need 20 of them and 80 olives, yet they can kill you in two hits and at this stage in the game it takes an excruciating four hits to kill them. They also come at you in swarms—not fun, but it is a challenge.

With all of the stressful parts of The Battle of Olympus you would assume that I did not enjoy this game, but that is far from the truth. I accepted this challenge and I conquered it whilst enjoying every part of the game (except for the centaur fight and the utter nonsense that was). The game is hard and certainly has some problems that a lot of games from that era had, but I rarely felt like the game was being cheap with me. It is musically and graphically great and is a truly hard platform title that I had never heard of until I played it. I really liked The Battle of Olympus and it could be one of my favourite games on the NES. Of course, I am a crazy person who loves and mastered Zelda II and that might be why I enjoyed this game so much. Anyone who is looking for a challenge or is a fan of platforming titles should check this game out, you will not regret it.