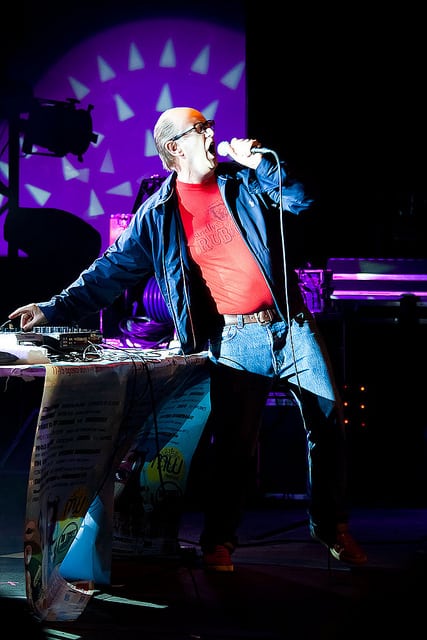 A DJ is only as good as his music and Sir David ‘Ram Jam’ Rodigan had all the best tracks on Friday. He has been paying serious attention to Reggae and related sounds since 1984 and his wealth of knowledge and experience showed.

Shy FX and Toddla T played good sets, but whether they intentionally showed restraint or if other factors crept in there was a marked change in atmosphere between the supporting and headline act. Memorising the songs, mixing them smoothly and taking a crowd of 3,000 on a musical journey requires a fully-developed spine. Rodigan is from a different era, and his performance and interaction with the crowd showed a bravery and honesty that made his set special. In between shouting “Manchester – show me some signal” and unleashing reggae weapons he was jumping up and down while biting his towel for joy. His love for his music is infectious, and it had the crowd dancing hard.

A let down came with Kevin Ford aka DJ Hype’s no show, car trouble halting his appearance. The acts across the rest of the bill went some way to making amends for this. Credit to Shy FX for playing ‘Original Nuttah’ which was well received by the crowd. His 2014 compilation Diary of Digital Soundboy is an accessible fusion of Caribbean and liquid d’n’b influences and well worth a listen. Toddla T was decent enough on the night, but did not interact much with the crowd and to a degree hid behind his laptop and flashing LED animations. His set really stuck to a formula that served its purpose but failed to surprise or delight.

The venue presented some problems, with some of the doors to the smoking areas being closed which meant it was hard to move around the ground floor. The downstairs room was near enough vacant all night and hence lacked atmosphere for the DJs who played there.

Overall, the crowd in their 20s & 30s seemed to have a good if not great time. It was up to Rodigan to make the night with a double set.