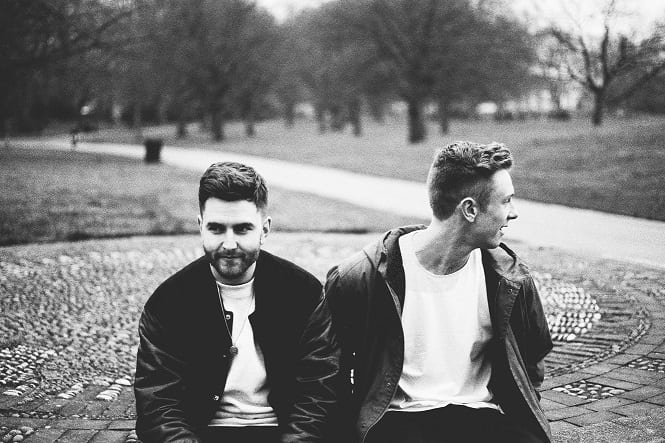 Bicep: from bloggers to the big time. Andy Ferguson and Matt McBriar started out posting their eclectic music taste on feelmybicep.com in 2008, and have grown in stature exponentially since with a string of impressive releases and DJ bookings across the world.

The musical culture of Manchester has influenced many a person towards dance music over the years. Andy studied at our fine university, but was also attending raves in Belfast from the age of 15. I ask if Manchester was formative to his interest in dance music, or if he arrived in the city with this well-established: “Yeah I went to Manchester Uni to study Chemical Engineering and used to pick up this paper all the time around campus, mainly to check what was going on that week. When I went to uni there was a vibrant – albeit very small – underground house music scene.”

“When I moved to Manchester all I knew was Shine in Belfast which was a techno Mecca, and moving to Manc at the time seemed like a much smaller scene. I used to hit up Sankeys Soap all the time in my first years, and that was a pretty special place and probably up there with my favourite clubs. When it changed to Sankeys it lost a bit of the grimey factor that I loved in the first place, it’s still ace but not a patch on what it was.”

“The city was definitely in a transition period for a few years when I arrived – WHP starting, Sankeys Soap coming to an end, and lots of small clubs also closing their doors (most notably Bierkeller in Piccadilly gardens where Tramp! had their Wednesday party). I would go out to the likes of Ricardo Villalobos at Sankeys Soap and there was max 300 people on occasions, whereas now there would be 10 times that at least.”

“WHP has definitely changed the game in Manchester and got a bigger crowd into the underground music scene which I think is only a good thing.”

Bicep are set to play Warehouse Project’s festival Parklife this June. “We have played Parklife since the first festival, Mad Ferret, and every year since so have grown with it. We have loved every year, Manchester Festival crowd is one of the best you can play. Down early, going hard all day till late and really in tune with the music, what more can you ask for?”

Looking further afield, the duo have DJ’d to crowds across the globe. “We love touring Europe, so many great countries and cities within a couple of hours from London. Sub Club, Panorama Bar, Robert Johnson and Concrete in Paris are some of our absolute favourite places.”

“It’s really nice to get the chance to visit Australia with our job, really love it down there. Also last summer doing Coachella and getting to spend a week in the desert in Joshua Tree was pretty special.”

Following his graduation, Andy spent time living in New York. “The idea of New York in the past (70s/80s) probably influenced me more than actually being there. As a child and growing up watching so many films I love (The Warriors, Escape from New York, Taxi Driver etc) set there, I found NYC nothing really like that.”

“There is no real sleaze factor there anymore, like when it was actually a dangerous place to live. Those John Carpenter-esque sounds and ideas still heavily influence the music we like and like to make though.”

2012 was a big year for Bicep, with the release of ‘Vision Of Love’ garnering a lot of attention. This however led to many slapping the duo with the tag of “90s house revivalists”, a term I felt lacked scope to the range of their production and sets. I question how they responded to this categorisation and if they now think they’ve transcended it: “Yeah I mean over the last couple of years there has been a take on a sound that was was big in the 90s (M1 organ and pianos combined with a TR909) and that has become really popular, like MK even getting a number 1 hit from a style he championed back in the 90s actually. It’s quite natural for journalists to label things; essentially it’s just a lazy way of trying to define a sound.

“I would say looking at the wider sound of 90s house music, from super deep to jazzy to rave to nu groove type madness, we can look at some tracks from each part of the spectrum and see how some have influenced our work. In our heads it’s not really a revivalist thing it more a case of using analogue gear they did back then but making it work for a modern audience.”

Andy and Matt work together on all their tracks, but have also produced a number of collaborations with artists such as Midland and Ejeca which causes them to change their approach. “We generally let the other person lead the process, because generally they will take you in a complete opposite direction from the start.

“We like to start out of the comfort zone, then its more exciting and challenging, from there we all work together to add our own stamp and make sure everyone is happy with the end product.”

Continuing on plans for future collaborations, Andy shares: “We’re planning to do something with the Simian Mobile Disco guys, but because our schedules are so busy its becoming harder to get a proper session together. It will happen, just when the stars align.

“Recently we have done a few more tracks with Hammer, one with a Manchester based artist Lapelle and another with a few guys from Toronto called Ebony which we will put up on our SoundCloud very soon.”

Starting Feel My Bicep at a time when there wasn’t exactly a lack of dance music blogs, the site managed to stand out from the crowd with an eclectic mix of genres and rare gems ripped from their own extensive vinyl collections. Thousands now look to the blog to find tracks; have there been any secret weapons the pair have regretted sharing with the world? “Haha no not really, we prefer to keep sharing because then you keep digging for more.”

Feel My Bicep parties have also gained world renown for the curation of stonking line ups and, of course, Bicep’s own DJing skills. Many of the world’s finest DJs have played, but one guest who hasn’t that they’d love to book is “Aphex Twin”. Branching out from DJing, Andy reveals plans are in motion for a Bicep live set: “Hopefully sooner rather than later, both of us are really excited about starting this venture.”

Finally, a duo operating under the name of Bicep – the question on everybody’s lips is surely: who can bench more? “Never had a competition, but Matt benched a girl in the Green Room of Corsica Studios, I wouldn’t have been able to do that.”

Bicep will be playing on the Bugged Out stage at Parklife Festival on Sunday 7th June. For more information and tickets please visit here.