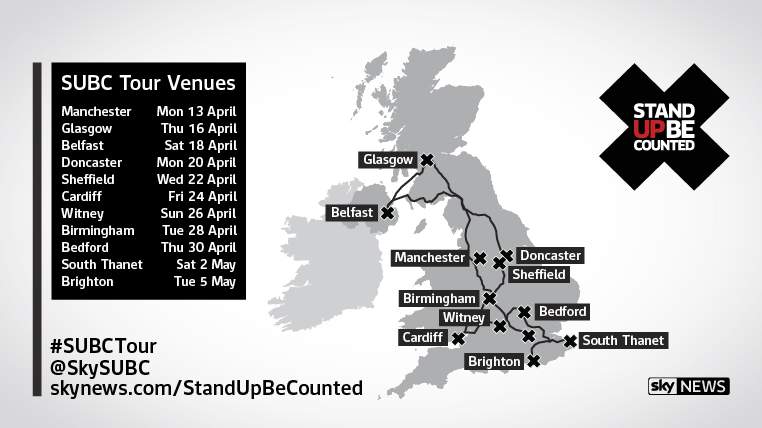 Cities from Belfast to Bedford will host the studio over the next four weeks. Photo: Sky News

Stand Up Be Counted (SUBC), Sky News’ digital campaign focusing on the voices and opinions of 16 – 25-year-olds, kicks off outside University Place on Monday.

A specially designed mobile studio will be visiting 11 UK locations will begin its tour of the country at the University of Manchester on the 13th of April.

It will visit areas such as Glasgow, Cardiff, and Nigel Farage’s contested constituency South Thanet over the course of the next month, before finishing in Brighton.

The aim is to give a voice to youth voters, creating an entertaining and interesting experience to engage people in politics before the General Election on the 7th of May.

The studio will be set up to interview students and broadcast their opinions nationally. Live coverage from Jayne Secker and Tom Cheshire will run throughout the day.

A photo booth will be set up where people can upload pictures of themselves to Twitter with the hashtag #SUBCTour. Individuals will also be able to record videos and practise being a presenter on live TV with an autocue.

Students are encouraged to register to vote, after changes to the system caused one million voters to ‘disappear’ from the register. According to the Electoral Commission, around 30 per cent of 18 – 24-year-olds were not registered to vote in January.

John Ryley, head of Sky News, said: “This tour is a really exciting opportunity for young people to engage with Stand Up Be Counted on a regional level. It will bring a unique experience right to the doorstep of people who might feel disengaged from the political parties and their campaign promises.

“We hope the tour will help more young people to have their voices heard ahead of the General Election, and we will put all our efforts behind amplifying their opinions.”

Coverage of this event will also be available from The Mancunion and Fuse TV.