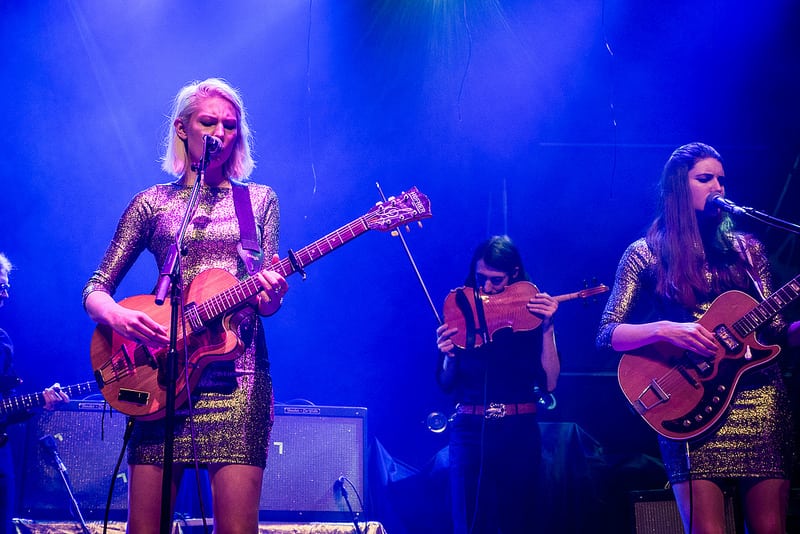 Public Service Broadcasting was prefaced with a never-ending whining by the Smoke Fairies. Very early in the evening (half seven) they were on stage at the Ritz – not many people had arrived by then, and those who had were not pissed, so it was a hard game once again for a supporting act.

According to Wikipedia, Smoke Fairies are a British dream pop duo comprising Katherine Blamire and Jessica Davies. But as soon as they strike their first chord on their guitars, it seems that these girls are not British, but from the Mississipi Delta playing vernacular Blues Rock, with the bends and slides, rocking the pentatonic scale and the bottleneck. It was badassery not introverted shoegazing. There were also three additional fellow musicians being pushed into the background (for not wearing tight silver dresses?); as they appeared to be the only ones smiling occasionally on stage, seemingly enjoying the gig in the vaguest sense in contrast to the front ladies, I thought they shouldn’t be ignored.

Well these girls with their tight, uncomfortable looking dresses were looking uncomfortable performing in front of an audience – with the average person being 30+ years old. Sure it can be cool to look obliviously at your audience with narrow eyes, bored lip movements, and moving your hips with the least effort, but only if you’re Warpaint. Also don’t take up a power stance and clench your fists while singing a very poppy, dramatic middle-8 part, as in ‘Eclipse Them All’; it only stirs up the cringe. These girls were in a bad mood and were very good at spreading it onto the crowd.

To be fair, they had very well written songs. Reminded me of early Black Keys’ albums with a more pop attitude and even more effects. I dug the trippy icy vibes and some bits of their imaginative lyrics, but it seemed they always wanted to sound cliché – cliché blues, cliché pop song structures and cliché take-me-serious-I-am-deep lyrics. They were playing their instruments effortlessly (with some amazing solos), singing pure tone, looking not bothered – in other words everything seemed as if they could do it flawlessly even if you woke them up with a gun shot in the middle of the night – especially the not-bothered-part.

Despite their name they were quite solid. But they drained energy; even when they later performed with Public Service Broadcasting. How is that possible?