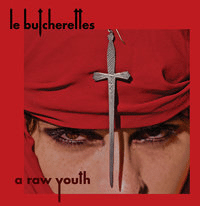 It’s only been a year since Le Butcherettes’ last album, Cry Is For The Flies, was released. During that time the band, led by Teri Suarez a.k.a. Teri Gender Bender, have been constantly touring with the likes of The Melvins and Antemasque, as well as writing and recording their third album A Raw Youth, produced by Omar Rodriguez-Lopez.

Upon the album’s release, Teri told Noisey that it was an “ode to rebels” and that much of the inspiration for this album—and the band in general—finds its roots in the history of Mexican culture. Le Butcherettes have also seen a change in aesthetic—they are now dressed head to toe in red, to replace Teri’s former onstage image of being covered in fake blood and raw meat (a statement on the treatment of women in society).

A Raw Youth kicks off with the band’s signature garage-punk sound in ‘Shave The Pride’. This song feels like the musical equivalent of having a shot in your arm and is a basic rallying call of “wake up, look around, and do something”. This head on approach continues with ‘Mallely’ and ‘Reason To Die Young’, which sees the band firmly in arena-rock territory. Things slow down when the album reaches fourth track ‘La Uva’ (‘Grape’ in English) with Iggy Pop, in which he sounds like some kind of monster from a fairy tale over a clumsy but entrancing psychedelic backdrop.

Teri explained the subject matter in ‘Sold Less Than Gold’ in the album’s press release, stating it “reflects the story of women who are sold into marriages or into sex slavery and how resilient their spirits are.” She told MTV News this inspiration came from her visiting Iran and meeting women that were “blacklisted for being widows or single mothers.” It’s a delicate topic to be dealing with and runs the risk of generalising and stereotyping certain women. Doubly controversial is that Teri takes on the perspective of one of these women, deliberately singing in a somewhat tired and weak voice. Isn’t this song meant to be portraying these women as resilient?

‘Stab My Back’ is easily the grooviest and most addictive track on the album with a punchy, explosive chorus. “Stab my back when I’m my strongest/your steel knife’s gonna make no red settle down,” Teri sings sultrily over a beat so hypnotic that you never want it to end. But unfortunately it does end quite abruptly and ‘They Fuck You Over’ is shoved in your face before you have time to let the previous track sink in. It’s another straightforward garage-punk with a direct no-bullshit message. Teri’s distorted, screechy vocals in the chorus are simply brilliant. “Come fuck me over!” she dares to whoever “they” is—presumably the powers that be.

‘Witchless C Spot’ echoes back to the power-rock vibe at the beginning of the album but its quiet, tense verses juxtaposed with a loud, dynamic chorus makes for a very satisfying song. Things get delightfully weird again with ‘The Hitch Hiker’, which tells the story of a female hitch-hiker being picked up by a male driver with intentions to take advantage of her and kill her. Teri’s voices alternates between the two characters, making for a fun song which perhaps distracts from its serious storyline.

‘Lonely & Drunk’ has a disjointed and somewhat ugly feel. But I can only assume that this reflects the subject matter of lost, lonely and drunk writers, who Teri has always credited as an influence, most notably on debut Sin Sin Sin (2011). ‘Oil The Shoe If The Critter Knew Any Better’ taps back into her playful vocals and jumpy keyboard. It’s one of the more lyrically ambiguous tracks with one hell of a catchy chorus designed to get crowds belting it out with their fists up. End track ‘My Half’ featuring John Frusciante is a decent enough song but not much of a closer, although there doesn’t seem to be any other place for it on the album, so perhaps it should have been left for an EP or B-side.

Le Butcherettes are still the same eccentric, challenging, noisy in-your-face band. But now they sound more layered, more ready to conquer and more curious about the outer world as opposed to just the inside of Teri’s head. They remain uncompromising, and downright strange—what’s especially great is that all the same elements of their bizarreness are there on every record, but in a new and exciting way.

I’m not sure this album would be considered an “ode to rebels” in everyone’s eyes, but that’s not the point. Teri has made her statement about certain power structures that exist in all societies and I struggle to think of many artists in a similar league to her. Le Butcherettes have once again proved themselves to be one of the most inventive and intriguing bands around—and not to mention having one of the best band names in the business.

BEST TRACKS: ‘Stab My Back’, ‘They Fuck You Over’, ‘Shave The Pride’, ‘Witchless C Spot’, ‘Oil The Shoe If Critter Knew Any Better’, ‘La Uva’