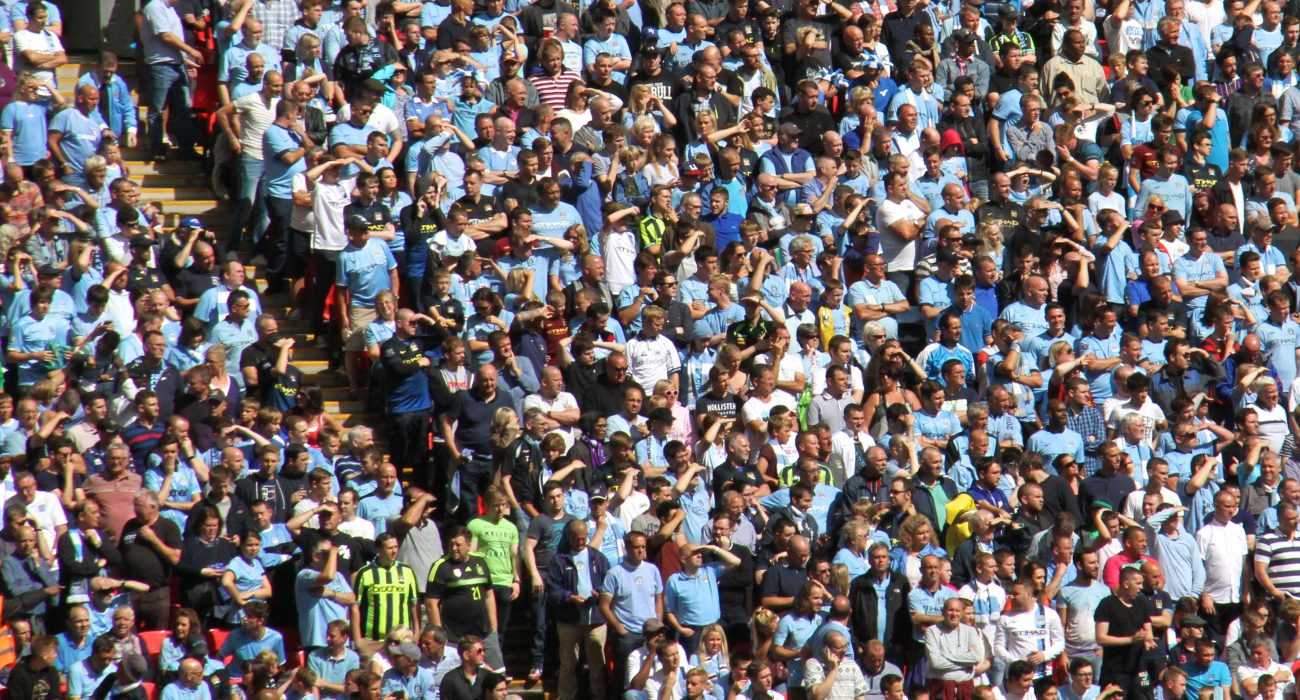 Photo: City fans at Wembley in 2014 after their last trip in the Community Shield.

Manchester City have secured themselves a place at Wembley in the Capital One Cup final amid controversial circumstances, winning the North West’s battle of the blues.

Both sides lined up with strong outfits. For City, only Joe Hart, Aleksandar Kolarov and Kevin De Bruyne were rested, in place of Willy Caballero, Gael Clichy and Fabien Delph. As for Everton, John Stones deputised for Seamus Coleman at right back, Joel Robles replaced Tim Howard, and Leon Osman made a rare start, as one of the three behind an in-form Romelu Lukaku.

City made a shaky start to the game, as Manuel Pellegrini’s decision to play the energetic Delph and thus push Yaya Touré further up appeared to back fire. Despite enjoying the majority of the possession, it was Everton who posed the greater attacking threat early on, with the pace of Ross Barkley, Gerard Deulofeu and Romelu Lukaku, repeatedly stretching the reshuffled City midfield on the counter attack. This resulted in Everton taking an early lead through the impressive Barkley, with his eighth of the season. The goal came in the seventeenth minute as he took the ball from just inside City’s half, evaded a challenge from Nicholás Otamendi and proceed to fire a vicious right footed strike into Caballero’s bottom right.

However, the goal did seem to wake up the blue half of Manchester. And only six minutes after going behind, Fernandinho levelled the scoring. It was a Phil Jagielka block from a timid strike from Sergio Aguero that created the perfect lay off for Fernandinho. His follow-up, though, involved a large slice of luck, with his shot taking a significant deflection off Leighton Baines and cruelly looping over the head of the immobilised Robles.

From then on, it was a largely City-dominated affair. Hitting the post through both Aguero in the thirty-fifth minute and David Silva in the fifty-fifth. Interestingly, Pellegrini also decided to reverse his decision to start Delph and replaced him with Jesús Navas at half time, as city reverted back to their conventional midfield of Touré and Fernandinho. Early in the second half, he also decided to bolster the attack by bringing on the prolific De Bruyne

The city pressure finally paid off in the sixty-ninth minute as the substitute De Bruyne levelled the tie on aggregate. It was a goal, however, riddled with controversy. On second viewing, it seemed clear that Sterling’s cutback to the young Belgian was made out of play. This left Everton boss Roberto Martinez once again furious at the officials, with him branding the decision ‘hurtful and unfair’. With decisions not going the Everton team’s way in recent weeks, they will feel aggrieved again, although City fans will be chuffed after being denied a penalty in the first leg.

Despite this, the game still had 30 more minutes, and it was only six minutes later that City found the goal that would take them to Wembley. Yet again, it was the substitute Kevin De Bruyne at the heart of it, as his perfectly whipped cross found the head of Aguero. The Argentine managed to find space in between Everton captain Jagielka, and Stones, who seemed uneasy at right back all night. His header was placed perfectly into the left corner of the goal, beyond the Everton backup keeper.

There were jubilant scenes at The Etihad upon the full time whistle as Manchester City ensured their return to Wembley in late February to face Jürgen Klopp’s red side of Liverpool. For Pellegrini, the win marked his second Capital One cup final in three years, giving him some respite, amid the relentless rumours surrounding the future of both him and Pep Guardiola. Despite this, there was some very worrying news for the Chilean as his saviour on the night, De Bruyne, was stretchered off late on, with what is reported to be knee ligament damage. Reports are surfacing that the Belgian could be out for ten weeks.

For Everton, it was hugely disappointing night as Martinez scorned the opportunity of an all-Liverpudlian final, in what was arguably the biggest game of his reign. The defeat has subsequently heaped more misery and pressure on the Spaniard in what has been a disappointing season.