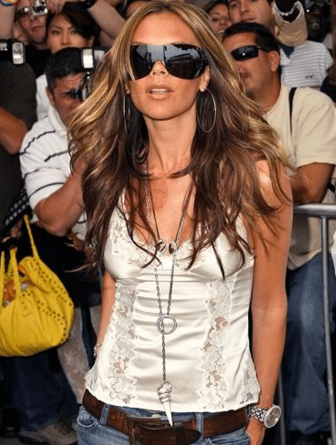 Although seemingly very recent, the style of the early noughties has already become as recognisable as the iconic trends of the 80s and 90s. Here are a few of the greatest and most questionable fashion and beauty trends that were hot at the turn of the millennium:

The peak of cool in the early 2000’s was the matching velour tracksuit from Juicy Couture. The matching coloured separates and ‘juicy’ printed on the butt was the mark of fame, and had an army of celebrity worshippers, too. The ultimate Juicy Couture moment came when Britney got married to Kevin Federline; with the bridal party and groomsmen sporting pink ‘Maids’ and white ‘Pimps’ tracksuits respectively.

With ‘less is more’ being the mantra of ’00s stars like Christina Aguilera, halternecks were miniature and had a DIY chic look going on due to their appearance in metallic and bandana materials.

Blended and subtle were the antithesis of this hair trend that saw a confusion of zebra highlights in contrasting bleach blonde and dark stripes. Atomic Kitten taught the world how to work tri-colour highlights on linear straight hair. Men reached for the bleach and transformed into porcupines; hair was spiked into alternating monochrome tufts.

Cargo pants were featured heavily on the red carpet—the most elite were those made in a shiny material or camouflage, and worn with heels. The most exciting qualities of the cargos was their ability to unzip into shorts and their many useful pockets. Versatile. If worn in a crowd, the cargo pants frequently referenced the top of another bandmate, creating a sense of cohesive cool.

The reflective material in fashion translated into the makeup of the early ’00s, with copious amounts of lipgloss being the biggest craze. Eyeshadow was also favoured, with the smokey eye being truly discovered in the early ’00s. High-shine was matched with fake tans that were considered better for being evidently orange, with the desired aesthetic of channeling Paris Hilton and Nicole Richie during their time on The Simple Life.

Possibly the best way of immersing in early ’00s memories is a look back at the huge cultural moment of the WAG (abbreviated from wives and girlfriends), and media representation of the jostle for style queendom at the sidelines of sporting events. The mixture of designer handbags and cliquey vibes made the WAG image a noughties answer to Mean Girls, with Posh: the Regina George of the crowd.

The baker boy or newsboy cap resurged from its 1920s origins into the millenium. An example of a more erroneous trend that had emerged, the baker boy hat was often worn over pigtails, and worn by Keira Knightley in Love Actually was where it was at its most iconic.

Following on from the ’90s trend for cropped tops, the noughties made it more extreme, with tops becoming even more miniature and trousers ending lower, expanding midriff visibility.

The full brow of recent years has been an answer to its noughties predecessor, eyebrows were thinned and shaped into manicured arches.

Oversized belts made of circular, studded brown leather (or pleather) segments were characteristically slung over gypsy skirts, making them ornamental accessory items rather than functioning as true belts.